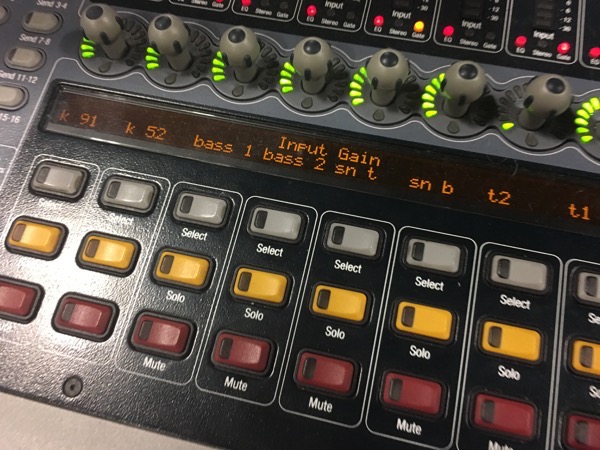 I feel like I change my approach to bass guitar more than any other instrument, and I think there are a couple reasons. Part of it is a sound thing, but at this point I think it has more to do with approach. I’m just trying to find more of a simple, universal approach. That doesn’t mean I want something generic I can stamp on everything, though, because I’m trying to get get an approach where I stay more or less invisible in what I’m doing that gets me the results I need for nearly any bass guitar. If that’s a little confusing, hopefully it’ll make a little more sense in a minute.

Lately, I’ve been playing with a technique I adapted from Michael Brauer for mixing bass. Brauer’s approach is to take two channels for the bass and focus one of them on more of what he calls the “neck” sound and one of them on the “body” of the bass.

So right off the bat I’m not happy about this idea because I’ve been trying to get away from mult’ing the bass. I know a lot of engineers do it, and I’ve done it in the past. I’ve just been trying to steer clear of it mainly because I think the bass guitar is more susceptible to phase issues because when phase issues crop up they tend to do a lot of damage in the lower end of the frequency spectrum. Just think about drums, for example. When we have phase problems with drums, it’s the body of the drum that we lose and not typically the attack or snap.

Another reason I try and steer clear of multiple channels for bass is because a lot of the live mixing situations I run into these days don’t allow for me to add a second input for the bass or anything else for that matter. This is a big reason I’ve been sort of streamlining some things I do when mixing lately. I don’t want to get hung up on techniques I’m not going to be able to do everywhere.

However, the other side of this is I just haven’t been happy with what I’m getting using a single fader for bass. I can make it work, but I don’t want to just “make it work”. I want to feel like I’m nailing it.

So let’s talk about these two channels. When I think about the “neck” sound of the bass, I’m thinking articulation. This is all about the detail and mid-range. I’ll probably roll lows off with a shelf or a bell and bump a lot of stuff in the mids and upper-mids. I’ll compress it as much as needed to get it consistent and to make sure there’s punch. I may add distortion or some dirt as well, but this is a little different from the kind of dirty bass channels I’ve used in the past. The dirty bass channel for me was kind of an add-on to the normal bass channel as needed. This neck and body approach requires both channels.

The “body” channel is more about the bottom end and feel of the bass. Some DI basses don’t need much because they’re pretty dark to begin with. In some cases, though, I might do a boost around pretty low like around 50 Hz to get some weight, and then I might add some lows in the 100-250 range. When I’m boosting, I’ll probably use pretty wide filters and be careful boosting because the danger in boosting lows on a bass guitar is you end up with notes sticking out. Then I’ll probably also compress this a little if necessary which can also help even out those boosts.

There aren’t any rules on this so it’s really about what works best for a particular bass. One thing that’s important to understand, though, is I’m not trying to remove the neck sound from the body and the body from the neck. What I’m doing is emphasizing a particular region on each channels. So it’s not high-pass one channel and low-pass the other. In fact, if I use high-pass and low-pass filters at all I’ll probably match them on each channel because failing to do so can lead to phase issues. But at the end of setting these up, both channels are full range with a different area emphasized.

When I’m adding the bass to the mix, I start with the neck channel because that’s usually the harder thing for me to get sitting where I want it. This is especially true when I’m working in a broadcast or studio situation because I want to try and get as much of that bass guitar to translate to really small speakers like a laptop and–if I’m lucky–smart phone. In the studio I’ll probably massage the EQ for this channel on a smaller set of speakers, too. Once I’ve got the neck channel where I like it, I just feather in the body until the whole thing feels right.

I’ve really been enjoying the results from this lately, and I feel like it’s helping me get the best of both worlds. On the one hand I get the clarity I’m looking for in the part, and then I also get that big fullness. If bass guitar is a struggle for you, this might be something worth experimenting with.

What’s your favorite approach for getting a great bass sound? I like this one right now, but as I mentioned I change mine all the time so I’d love to hear about yours in the comments.