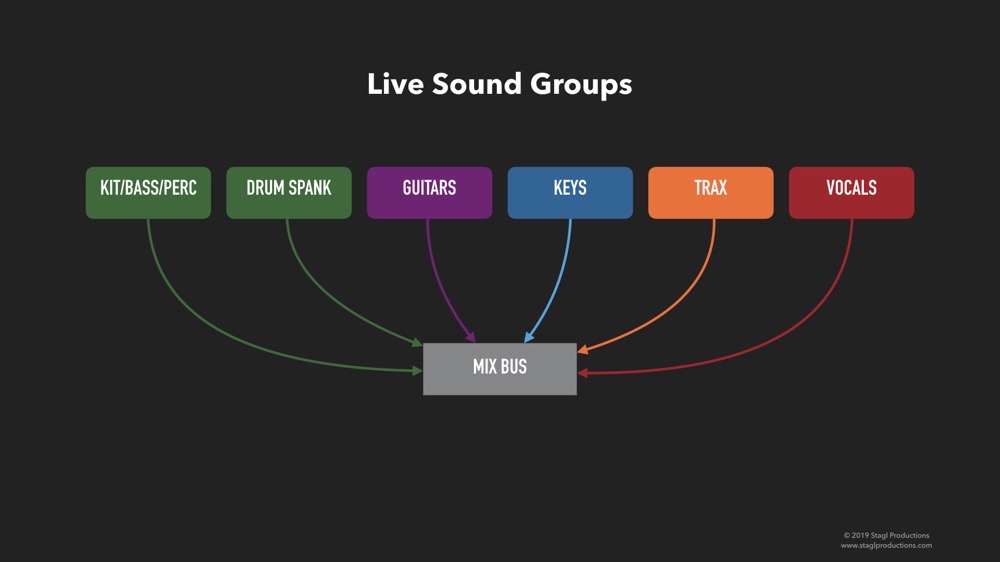 One of the bigger changes that’s been happening with a lot of my mixes over the last few years relates to my use of sub-groups. I’ve used groups for a long time as a means of processing a bunch of inputs together as well as a way to gain stage things. This is still the case for me, but the way I use them varies a bit depending on the environment I’m working in along with my the availability of groups. For example, when I’m mixing live on Yamaha consoles I never use groups because I’m not a fan of the way Yamaha implements them. On Digico and Avid consoles I use them all the time, though, and when I’m in the studio I use them a lot as well.

So let’s examine some of these approaches. First up is my traditional live sound use of groups.

In this approach, I have a group for each of my different instrument types. On occasion I may have an additional group for something like live strings or maybe even a choir. I should point out that I don’t ride these groups. Instruments get routed to these, and then I may process each group a little and adjust the overall level. Once that is done, though, I rarely touch these, and when I do it’s typically only when a new song starts. So this is more of a mix “management” thing for me.

The main thing I get from these is usually gain staging which I learned from Robert Scovill a LONG time ago. I’ve probably written and talked about this before, but here’s a little review.

I like running healthy input signal levels on all my inputs because I think it usually sounds a little better, but more importantly I think the stuff I insert on those inputs such as compressors tend to work better. I also like to have those input faders as close to unity as possible so I have maximum control on the faders. Unfortunately, if I crank a guitar input up to where I want its input level and put the fader at unity, in most cases that guitar is too loud relative to the other stuff in the mix. So I need a way to trim that back, and I do this with Groups.

Processing on Groups is usually pretty simple for me. It’s mostly a little bit of EQ or dynamic EQ to tame things as a whole or to sit together better with the other stuff in the mix. These days compression is pretty rare for me on groups aside from my “Drum Spank” group which I use for parallel compression on drums.

Next up are the Groups I find myself using more often in live sound settings. 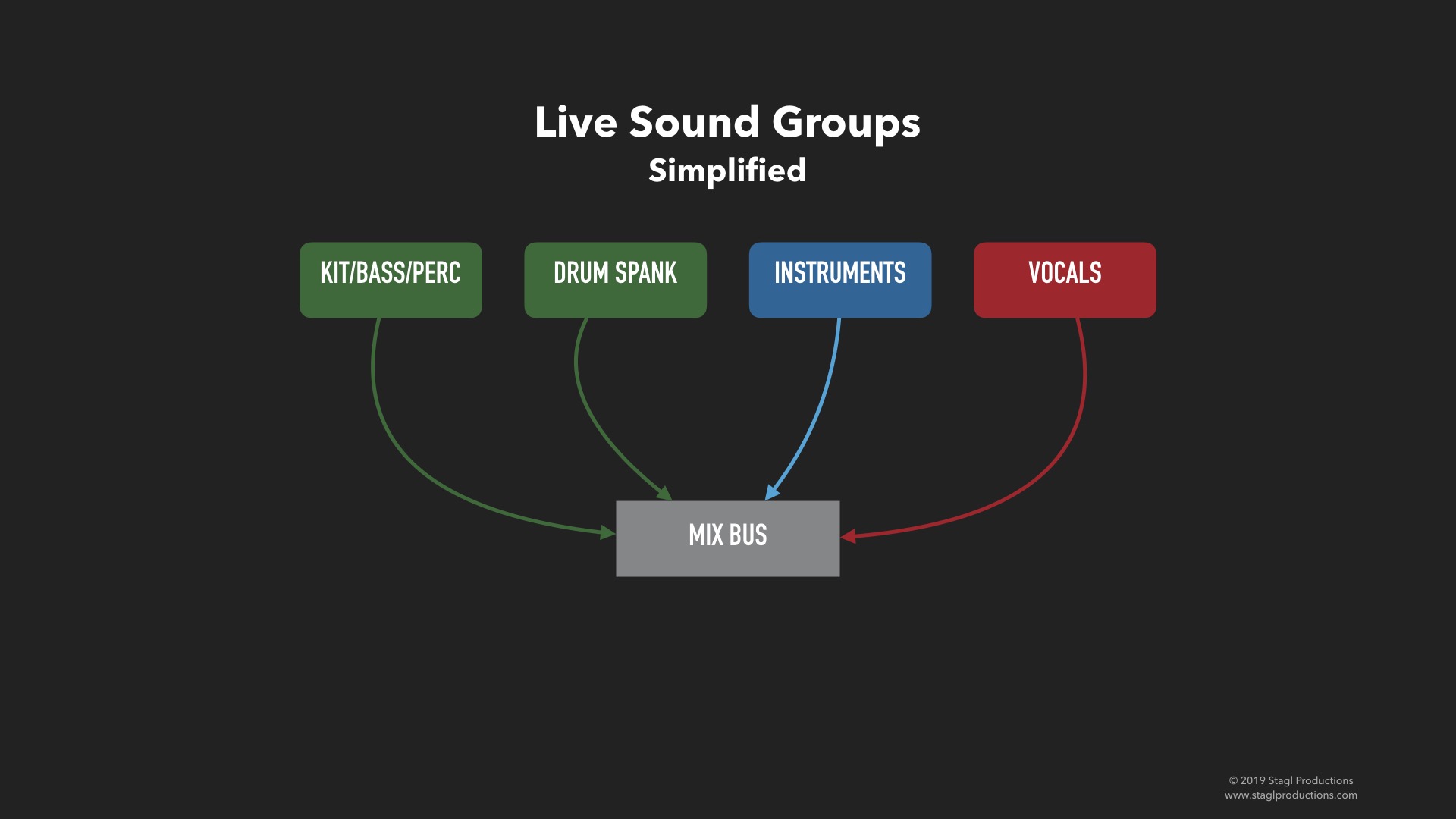 This is a simplified version I started using after running into console limitations. For example, a lot of the gigs I’ve done over the last few years have required monitor sends from FOH. Creating those extra sends and/or auxes often limits the number of Groups available so in these cases my instruments get collapsed down to one Group. Strangely, in some ways I’m almost liking this better, though.

Sometimes when I go back to listen to board mixes, though, the first thing that jumps out at me is the guitars and keys could probably come up. It’s usually just a couple dB, but to me that couple dB can make a big difference in the impact of the music outside of the room. With streaming and overflow needs along with the band and producers reviewing that content outside of the room, making this better is important to me.

So in this setup I’m still using groups to gain-stage, but it’s not uncommon for me to put a baseline mix together and then just go in and turn my instrument group up a couple dB.

Finally, we have the Groups I’ve been using in my studio which build off of my simplified live Groups. 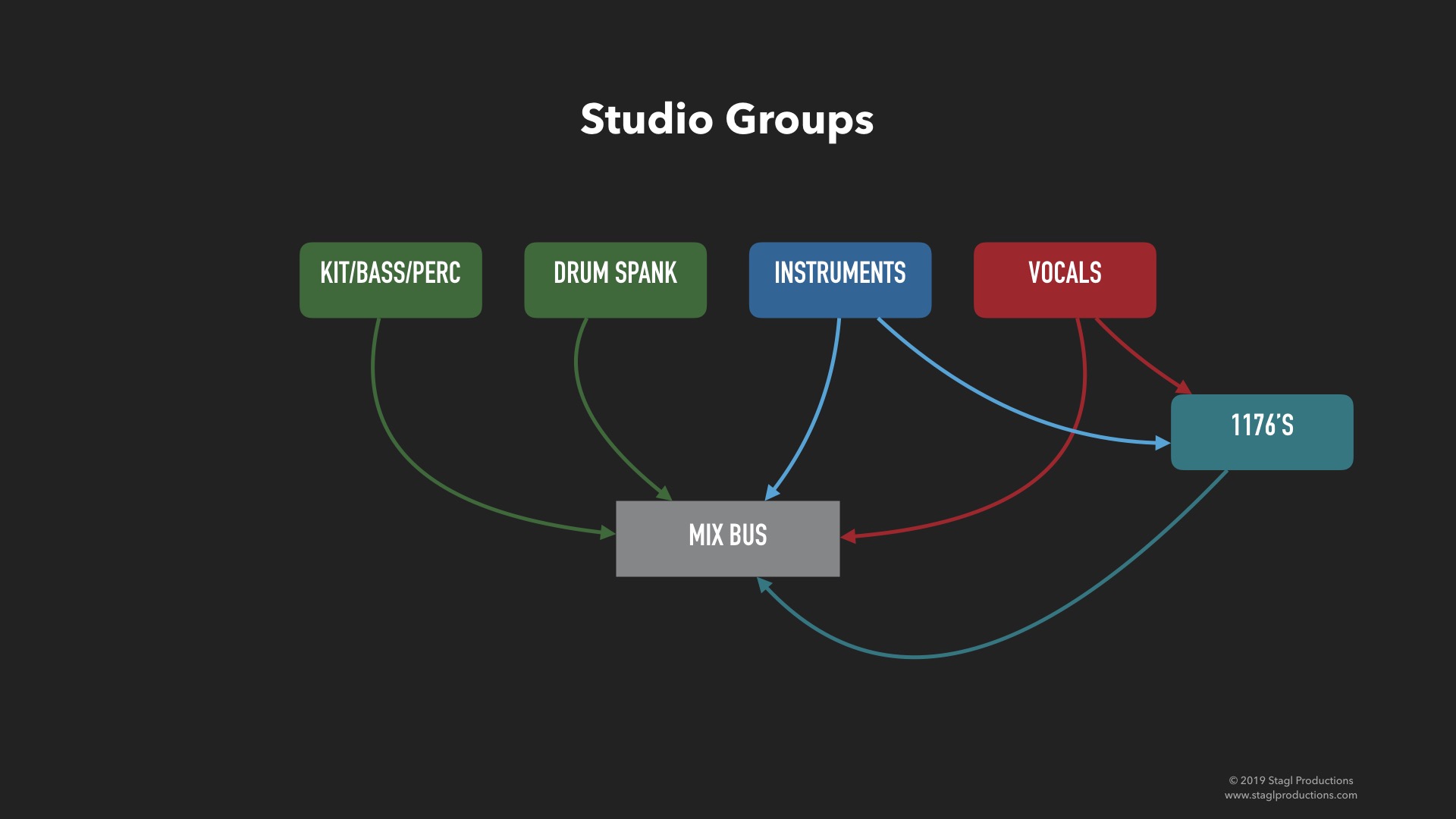 The biggest difference here is the addition of my “1176” Group. I actually wrote about this a few months ago, and this is basically a Group I use for parallel compression. It’s called “1176’s” because I usually use a pair of CLA-76 plug-ins to do this.

I like parallel compression, but lately I feel like it is one of the most over-hyped mixing techniques out there. And when things start getting over-hyped it’s easy to start thinking that something is the missing link and magic bullet to perfect mixes. Parallel compression is definitely not that, though.

To me, parallel compression is like a thickening agent. It does other stuff, but the big thing to me is it sort of increases the density of things which is part of why I’ve used it on drums for so many years.

In the context of my 1176 Group, I also use the parallel compression to automate automation. For example, the loudest thing in the mix tends to drive the compressor so when the vocal kicks in it drives that compressor a little harder which effectively turns down everything else that is in that group. In the case of the instrumentation, it dips it down a bit while the vocal is there, and then rides the instruments back up a bit in the breaks between vocals. That’s a simplified version, but spread that across several instruments and vocals and it makes them all interact off of each other. The way I blend it into a mix is very subtle, though, almost like I’d use a reverb so you probably won’t notice it until I take it away.

A key difference in my studio is I have access to a nearly unlimited amount of groups compared to the live world. I don’t use as many groups in the studio, though, because the pace of mixing isn’t nearly as demanding, and I don’t find myself needing to manage things quite the same way.

In some sessions, however, I do use additional sub-groups that feed into the groups above. For example, I have a client where the sessions feature a pretty large band including your standard rhythm section, live strings, brass, a half dozen or more vocalists, and a 200+ person choir. In a scenario like that it’s common for me to fold some of those things down into a group for processing. For example, that choir comes in on 12 channels. So I get a fader balance and panning set for each mic, and then I route them to a group where I EQ everything together and add any additional processing. That “Choir Group” then feeds into the “Vocals” group shown in the diagram above.

I guess if there’s a takeaway it’s that groups are a great tool for me when it comes to mixing, but they’re not a one-size-fits-all solution. Every situation and environment is unique, and I adapt my approach depending on what’s needed.

Do you make use of Groups or Sub-Groups for mixing? How are they helping you these days?