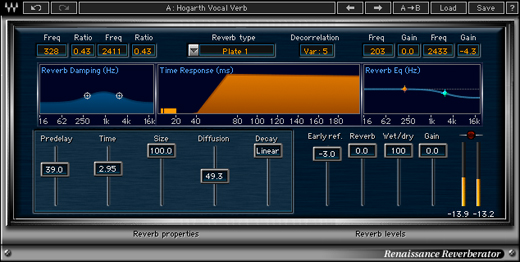 State of the Mix 2012: Felt Reverberations

I seem to get and see a lot of questions about reverb. I’ve talked in the past about my love/hate relationship with reverb, but the reality is that I do use reverb so I figured I’d talk briefly about how I approach it these days.

Reverb tends to be the FX drug-of-choice for audio guys. Everyone loves to crank the verb when they first get to play with it. The problem, though, is reverb can actually do a lot more to a mix than a lot of guys realize so applying it in a constructive way can be challenging. Mike Senior even writes about 5 different ways to use reverb in his book Mixing Secrets for the Small Studio

. Of course, these five ways aren’t mutually exclusive which can make this all the more confusing.

Reverbs tend to have a lot of controls especially as you get into the fancier ones. Stav has a great method for figuring out what all those different controls can do in his book Mixing With Your Mind that I recommend checking out if you’re trying to understand every little knob, but I’ll hit on a few of the common controls, though, because these are what I tend to focus on.

First up is Pre-Delay. Pre-Delay is basically a built-in delay in the reverb unit. Pre-delay is the amount of time the reverb unit will wait before it starts spitting out processed sound. Getting reverb to work in your favor often depends on getting the pre-delay set properly. Without pre-delay, the reverb will start immediately which can cloud the original source up. Pushing the reverb later in time can help keep the original sound clear of the clarity killing effects of reverb. Lately I skip the pre-delay entirely and typically just put a delay plugin on my aux-send that feeds my reverb. I use a delay plugin instead so that I can tap my pre-delay times.

Next up is Time or Decay which is how long it will takes for the reverb to decay or fade out. This is generally the main control for the device. Shorter times decay faster and longer times stay swimmier.

Finally, we have Early Reflections or First Reflections. In acoustics, early reflections are the first reflections of a sound off the walls in the room that your ear hears. Our brains use these to perceive the size of a room.

Now, I there is one more control I should mention, but I rarely touch it, although, maybe I should play with it more. With digital reverbs there is often a Type control that selects what type of emulation the reverb is. Back in the pre-digital reverb days, there were a lot of different ways to add reverb and Type chooses an emulation of these original reverb implementations. An analogy would be the amp types in modern day amp emulating plugins and gear.

Personally, I don’t focus on these because you really just need to go through the different types on your particular unit or plugin and find ones you like. Try not to get hung up on what the manufacturer called them because it may have no bearing on what they actually sound like. PLUS, unless you’ve worked with actual vintage reverbs like chambers or plates or springs, you’re better off without any preconceptions for what certain things are supposed to sound like so all you should really go on are your ears. Do yourself a favor and just flip through the types and find ones you like. When in doubt, go with my buddy Mike Sessler and start with a plate setting. His scientific way of starting there is because he likes them.

So on average I have one of two goals in using reverb. I use it either to make something sit more naturally in the mix, or I use it to give something more sustain.

Reverb is an interesting thing in the world of sound reinforcement because the rooms we mix in often already have a natural reverb. However, there are still times that close-mic’ed sources can feel too dry in the mix to the point where I think they sound unnatural. It’s like they’re too clean and stick out instead of melding with the music. I typically notice this the most on vocals and acoustic instruments, but this can crop up on just about anything.

When I’m trying to make something sit more naturally I typically lean towards shorter times. That means shorter pre-delays AND shorter verb times. I’ll typically start with verb times of less than a second. I might also play with the Early Reflections because often this use of verb is to make the source sound more like it’s in some sort of space which is what the early reflections are supposed to do.

Sustain is a different animal for me. Sometimes within a song, I just feel like an instrument’s notes need to be longer within the context of that song. For me, this typically tends to happen on slower songs especially when there’s a lot of space between notes. Great musicians generally take care of this because they feel the same tension I do, and they’ll often add their own sustain or verb via patches or through their playing style. However, there are some instruments like drums and vocals that can’t do this so easily. I set these completely by feel and try and set the verb so that it works like an extension of the instrument. This means I’m typically trying to have the verb start before and overlap the natural sound a bit.

Here’s some more stuff to think about when playing with reverb. Remember, we’re all about the music this year, and reverb should be a very musical thing because no matter what you’re trying to get it to do it’s going to affect the feel of the song.

2 Responses to “State of the Mix 2012: Felt Reverberations”