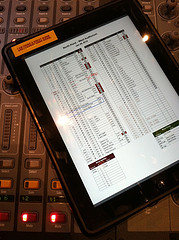 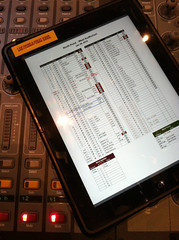 In January I talked a little bit about how I’ve been trying to get us paperless this year. We’re not completely there, but we’re a lot closer as a team. In my day-to-day work, however, I’m probably 90-95% paperless.

This year I’ve been trying to moving most of our input list use to PDF files. I create the documents in Numbers just like I mentioned in my last Paperless post, and then I print a PDF. The PDF’s print in a Dropbox account I created for our Audio Department. If you’re unfamiliar with Dropbox, it is a fantastic way to synchronize files across multiple systems. I started using Dropbox years ago when it was still a closed beta and highly recommend checking it out if you need to access the same files across multiple systems.

Since our audio world is highly reliant on computers, we have them everywhere. I installed our Dropbox account on one computer at FOH and one computer at Monitor World in each of our auditoriums. When I print the PDF of the input list, it instantly arrives in each area. I stopped printing input lists for FOH in January, and they have been completely reliant on the Dropbox input lists. Monitor World will hopefully be transitioning this quarter as we reconfigure integrate our new consoles.

Input lists on computers are great, but it doesn’t solve every use of them. For example, the paper input lists were always essential whenever I would pin the stage. I’d connect something and then fill in the blank where I plugged it in. Then I’d take the paperwork back to patch world in our amp room and patch everything.

Just before Christmas, my Production Director purchased a couple of iPads for audio use. One of these has become integral in my daily work, and the other will eventually land backstage for our team’s portable use. So far this year we’ve been relying on these to get our stages ready. What was once paper is now handled by staff on the iPads.

I’m working on the iPads primarily with an app my good friend Tim Corder introduced me to late last year called GoodReader. GoodReader is a PDF reader, but most importantly for me is its ability to annotate PDF’s and sync with Dropbox.

I have a folder in GoodReader that syncs with our input lists folder in Dropbox. I can then open up the input lists, make notes on them, and sync them back up with every other computer. I can type the notes or just scribble them with my stylus. It is turning out to be a great fit for me, and I love the fact that I don’t need to try and keep a half dozen paper copies up to date any longer.

For the short term, I am still printing out a single copy of the input list for each auditorium to live at monitor world. However, this has even been much easier over the last couple years because our office printer can handle the workload so I don’t need to go find the copier on the other side of the building. I also like the fact that printing them out is now the very last thing I do to get ready instead of the first thing I need to do. This means the printed copy is much more up-to-date than they’ve sometimes been in the past.

I’m tentatively targeting the 2nd quarter this year to stop printing altogether. But first I need to get through our monitor console transition. I’ll probably have more on what will become “Phase 3” in a few months.