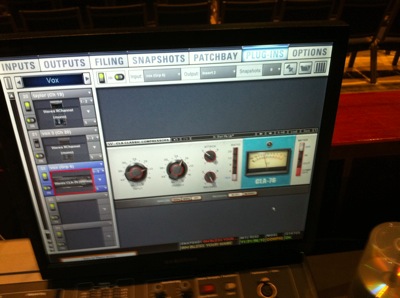 I had a lot of people asking on Twitter about a trick I learned with the Waves CLA-76 at Gurus in Chicago. This was something that Lee Fields was telling me about and demonstrated for me in the Waves booth. It’s not a new trick, but it was the first time someone has actually demonstrated it for me.

Vocal compression, in general, can be important in modern music. Some people like to think of it as a way to keep the vocal up front, and there’s some truth to that, but in reality if that’s all we’re after can’t we just keep pushing the vocal up until it’s always audible? Well, not really. Depending on the training and experience of the vocalist, vocals tend to be quite dynamic and just pushing them up over the band so the quietest lines are heard often gives the impression that the vocal is disconnected from the rest of the band.

I look at vocal compression like this: compressing vocals is a way to even out their dynamics so that they are more in line with the dynamics of the rest of the band. You can look at it as a way to make the vocal louder because remember that when we compress things we always raise the average level of the signal. I, on the other hand, like to look at compressing vocals as more of a way to sink the vocals back into the band without losing them. By evening out their dynamics, they can hold their own against the band much better.

So here’s the trick that Lee showed me. Take your lead vocal and insert the Waves CLA-76 Bluey on it. Set the ratio to ALL buttons in. Then set the attack around 12 o’clock and the release as fast as you can set it(all the way clockwise). Adjust the Input if necessary so that the needle is going nuts and slamming to the left.

This can be great for a rock vocal. The All buttons in mode makes the compressor look like it’s going to explode so you need to rely on your ears with this. In fact, don’t even look at it once it’s going crazy, just listen. The heavy compression can help take the edge off it while keeping it up and present in the mix.

You’ll need to be careful with this particular trick because it’s not going to work in every situation. On a loud stage you might really hear it working as the ambience comes back in. My first attempt using this didn’t work with the vocalist when inserted directly on the track. However, it did seem to work nicely when used for parallel compression. Your milage may vary.

For some added goodness, you can follow the CLA-76 with the Waves C6. Lee also had that inserted with Pooch’s vocal preset in use. I’m not typically a fan of presets, but I must say that it sounded good.

3 Responses to “QuickTip: A Bluey Vocal”