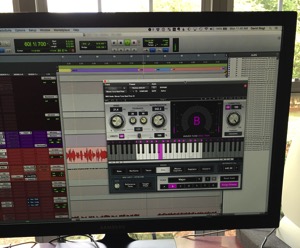 So, let’s finally look at the new plug-in from Waves: Waves Tune Real-Time. Will it provide that safety net I talked about in my last Pitch Perfect? article?

First and foremost let me say up front that like all tuning plug-ins I don’t think this plug-in is a magic bullet. If you are looking at this to heal vocal issues stemming from untalented vocalists, I think you’re going to be disappointed and may even potentially create problems using it.

Also, be aware that any type of pitch correction software is simply going to correct the note being sung to the nearest technically correct note. Sure you can set the key of the song so you correct to a note within the song’s key, but this type of processing isn’t going to make sure your vocalist is hitting the correct note in the melody to begin with which is something I, personally, often find more distracting than loose pitch. All that said, just as a great compressor can add a layer of polish on a great vocal, I think this plug-in can do the same thing in terms of pitch.

I demo’ed the plug-in in my studio using a variety of live recordings. The tracks were a mix of talent levels so I tried this on some pro’s as well as the stereotypical volunteer church singer. I wish I could share some of these experiments, but when it comes to demonstrating this kind of thing I find it a bit like posting naked photos of someone so it’s not something I feel comfortable doing. If you’re really interested in this, Waves offers a demo you’ll probably need to try for yourself.

Out of the box, I initially felt like the default setting in the plug-in over-processed the vocals I tested. In other words, I felt like I could hear it working. I say felt because hearing pitch correction in action can be tricky, and I think this brings up an important point in regards to this type of processing.

Pitch correction done well can be difficult for my ears to detect especially as it gets more transparent; I know, go figure because that’s kind of the point, right? Because of this I don’t find I can easily A/B this type of processing by bypassing it to decide whether one version is better or not so as a result sections need to be checked one at a time. In these evaluations, I’m typically listening for three things:

The second criteria isn’t so cut and dry all the time because sometimes there may be quirks within a vocal itself that we–or at least I–hear as a tuning artifact when we’re concentrating on trying to hear tuning artifacts. These artifacts may also be exaggerated to our ears if we see the plug-in visually working. In other words, it’s hard to avoid creating a self-fulfilling prophecy with this type of evaluation because often when we go hunting for trouble, our brain often makes sure we find it. So when you’re evaluating this type of processing, it’s important for you to know what’s going on BEFORE you process.

Now, I’m not saying we never hear artifacts from this stuff because pitch correction can definitely create artifacts. In fact, HERE’s a good video to help you get started in learning to pick these types of things out. After you watch that video, go check out the music from episodes in, I think, the third or fourth season of the TV show Glee because I’m pretty sure that’s when the tuning became too much for my ears and when I could no longer listen.

Aside from creating strange artifacts, another danger in employing pitch correction is we often end up toying with very subtle nuances of a vocal. They’re audible subtleties, but if you haven’t been trained or learned to listen to them you might not notice them. Now, you might think, “If you can’t hear them than who cares?” The problem with that line of thinking, though, is these are the types of things that people who don’t necessarily hear them directly still pick up on. Then the problem becomes a disconnect for the listener. People don’t know exactly what’s off, but they just kind of know and feel something’s not right.

With these things considered, let’s get back to my initial experiments with the default settings on the Waves RT Tune plug-in. Through some more testing, I became unsure of whether the plug-in was always over-processing things. In blind tests, sometimes I could hear artifacts and sometimes I couldn’t. With a bit of tweaking, however, I typically could always get things pretty transparent on the stronger vocalists I tried the plug-in on. Backgrounds, however, were a different story.

In most cases, the backgrounds I tested were not strong singers and needed some olympic-level pitch correction to get them technically in tune. This left me with a couple of options. Option 1 was to get the plug-in really working on the vocals, however, the artifacts were pretty obvious in this scenario. Option 2 was to have the plug-in work lightly, however, this left those backgrounds still too far out of tune to work as well in the mix. In my tests, I opted for blending the artifact versions lightly into the mix keeping in mind if they got too loud the reconstructive surgery would be known.

As I mentioned, with a bit of tweaking I was able to find some settings that worked for me on the stronger vocals pretty much every time. I think part of this comes down to the plug-in’s ability to let you adjust the re-tuning tolerance as well as the amount of tuning that happens. 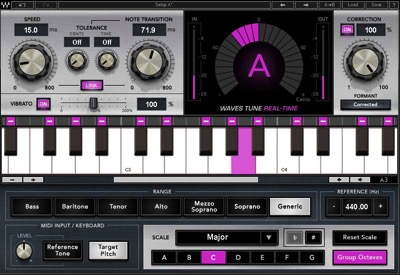 For example, the Tolerance controls, in effect, let you widen the distance the vocal can go out of tune before correction occurs. Then the Correction control may be adjusted almost like a ratio control to determine how much correction is applied. So with these controls I could set things up where not much correction was going to happen, but where my artist would still be kept out of the weeds.

In addition, I found the plug-in gave me the best results when I had the key to the song properly set along with the Correction Rules applied. You can set the Correction Rules by clicking on notes and telling the plug-in to pull up or down when a specific note is hit. The challenge here, though, is you have to know the song and how your vocalist sings it. For example, if he/she is consistently flat on certain notes, you can in effect program the plug-in to always tune up from the wrong notes.

So, to sum it up, I don’t think this plug-in is a magic bullet. However, with decent to great singers I think it can provide a pitch safety-net and add a bit of pitch polish to a vocal if you’re after that sort of thing. Like many things, the best results will take a bit more time to dial in, though. While I think this plug-in will help in the live sound world, for sure, an application where it might be more helpful is broadcast where pitch problems that room acoustics hide become more noticeable.

Personally, I still believe working with a singer to help them perform their best is the ideal way to go, and I see this plug-in as a safety-net/last resort. If you are going to start employing this plug-in, I would strongly caution you against using it on rehearsal and reference recordings for your band, though. If you already struggle with your singers, and they start hearing themselves better than they are, they are likely to get lazier if you fix their rehearsal recordings.

If you end up giving this plug-in a try, I’d love to hear about your results. Feel free to add them in the comments.