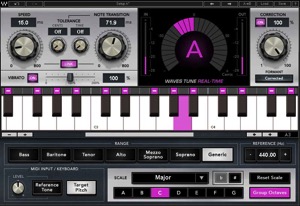 My friends at Waves released a new plug-in this week that I know many of the folks I work with and talk to have been eagerly anticipating: Waves Tune Real-Time. If you haven’t seen the publicity for this, yet, it’s basically an automatic pitch correction plug-in that really targets the live sound market.

Pitch correction of vocalists is a controversial subject. My own feelings on the use of pitch correction aren’t really black and white. While I’m not typically a fan of automatic correction, I’m not opposed to using pitch correction here and there at times. The way I see it is I adjust the tonality of a vocalist with EQ, and I adjust the dynamics of their performance with compression and fader rides. In the studio, I can further adjust the timing of a performance through editing. Pitch seems like one of the last element of the performance remaining, and if I’m OK touching all the other stuff I don’t see why I should treat pitch as sacred. If fixing a note here or there helps the overall performance and everyone is on board with doing it, I’m OK with it. I realize not everyone shares my opinion on this, and I think that’s OK.

I have several, but I think one of the primary reasons engineers like myself often get heated up about pitch correction is many see it as a crutch or excuse to make up for lazy vocalists. Most of the engineers and MD’s who ask me whether there is a form of “auto-tune” available for live use come from this perspective so let’s talk about an elephant in the room because I know a lot of you are working in church situations.

I always hated the audition portion of American Idol because it often made me feel bad for many of the poor singers being exploited. I never felt bad because someone couldn’t sing, though. I felt bad because I knew many of them didn’t have people in their life who loved them enough to tell them the truth and protect them from the show exploiting them.

It has been my experience that there are music personnel in churches who lack the character and/or courage to have challenging conversations with their performers, and this goes beyond just singers in regards to their pitch. In my opinion, if you hold any sort of leadership role in music, it is part of your job to talk about performance with your musicians and you do them a disservice by avoiding it. I was a band leader for many years and had my own varying degrees of success and failure at this, so I know it’s not always easy. However, by avoiding these conversations you prevent them from receiving guidance on how they can improve, and YOU become responsible for how they are performing. Are you helping your players excel in their craft or are you withholding information? Unfortunately, I see a lot of information withheld.

Now let’s get back to the issues with automatic pitch correction.

Automatic pitch correction is not a magic bullet. Part of why many engineers don’t like automatic correction is historically it hasn’t sounded good or natural especially when being pushed.

This is purely my own theory and opinion, but as humans I don’t think we care about perfect pitch. What we care about is RELATIVE pitch. We want a note to be in tune relative to the note that came before it. We also want notes to be relatively in tune compared to the other musical elements that are performing. Even with this, I believe there’s leeway in our brains when it comes to pitch because nothing in nature has been perfectly in pitch for the thousands of years humans have listened to music.

For example, pianos use tempered tuning. You can use the Google to learn more about this, or HERE’s a video you can check out. Similarly, most guitars drift in tuning as you move up and down the neck because intonation on the majority of guitars is not perfect. And then there are all the fretless instruments in the world. Do you think those get played perfectly in tune even by the greatest symphonies? Of course not.

If we analyzed recordings of legendary vocalists, we would quickly discover they, too, are not perfectly in tune. They often glide out of “perfect” pitch transitioning between notes and even when they hit many of them. This is part of the character of their performance, and it doesn’t bother us because they are typically relatively in tune. Personally, I think there’s something in our brain that prefers this.

When we employ automatic pitch correction, the machine can’t differentiate between an acceptable performance and something that may benefit from fixing. The algorithm simply detects the pitch of the source and measures how far off it is from its preset “technically accurate” pitch for that note. Then it employs another algorithm to correct that note hopefully in a way we don’t notice. The machine is not listening; the machine is doing math.

And even if we can correct the pitch in a transparent fashion, we potentially create additional issues in the process. Remember, I said I think we like relative pitch, but now we have some thing(s) changed to the technically correct pitch while other inputs have not been moved. Here’s an example.

I remember working with a live recording where the lead vocal needed a lot of tuning help to make the original performance work. Normally, this is the kind of thing that would have been re-recorded, but it wasn’t an option at the time so re-tuning was the best solution. I got the vocal working right up until the song broke down and the audience mics needed to be pushed to get the now singing crowd up into the mix. This created some interesting artifacts thanks to the un-tuned vocal that was just prominent enough in the audience mics to be an issue.

So what am I trying to get at with all of this?

Now, you might have read all this and gotten the impression I’m not in favor of using pitch correction, but that’s not entirely true. At the end of the day I try and be solutions oriented, and there are times when I am open to using pitch correction. In my next article, however, I want to talk a little about ways of dealing with pitch before resorting to some sort of pitch correction. Also, philosophical issues aside, I know some of you would like to hear my thoughts on the new Waves plug-in, and I will have those coming soon as well.

One Response to “Pitch Perfect? – Part 1”