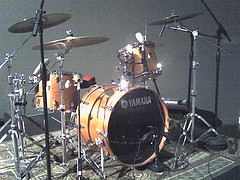 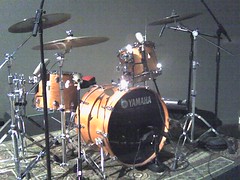 This week is set build week, and we’re re-doing our risers. We stripped the drums entirely off the riser–well, I left the kick drum–along with the mics and cables so that we could vacuum the rug. I’m not a professional drummer so I put the drums back up the best I could knowing one of our drummers will most likely rearrange things a bit at rehearsal on Wednesday. Mic positioning is also not final. The mics and positioning on the drums are what I inherited from the last audio director, and I’ve been VERY happy with them. Here’s what we’re using these days:

Kick: Beta 91 and Sennheiser 902. The 91 is great for getting the “click” and the 902 does great for the thump. I had never used a 902 before, and right now that would be my first choice for kick drum mics if I could only use one. We put the 902 3/4 into the drum pointed at the beater head, but off-center. Then the 91 goes abut 1/4 in so it’s closer to the front head than the beater head–this keeps it from getting too clicky. This is stuff I picked up from the last audio director. When I’ve used 91’s in the past I used to put them about 3/4 in closer to the beater head, but I’m liking this better right now. In the past when I’ve used dynamics with condensers, I’ve tended towards sticking the dynamic either just inside the hole or right on the outside, but again I’m liking our current configuration more.

Snare: 57 on top and bottom. I fire the top mic across the top head angled down a bit so that it is aimed between the center and outside of the head. Bottom mic ends up perpendicular to the bottom head so that the top and bottom mic tend to end up at a 90 degree angle from each other which seems to help with phase issues–I like to aim it right at the snares whenever possible. On occasion I’ll flip the polarity of the bottom mic, but I don’t usually need to.

Toms: I’ve used Beta98’s in the past, but right now I have Shure KSM44’s which work pretty cool. I’ve struggled with getting tom sounds in the past, and I haven’t had any problems with these mics. Positioning ends up the same as the snare with them aimed between the center and outside of the head. The mics are mounted on LP Claws which get attached to anything BUT the drum itself. This helps keep them from affecting the tuning of the drums. I will probably pick up some Sennheiser 421’s at some point this year along with some Beta98’s just to have some more options, but in the meantime this is working great.

Overheads: KSM44’s. These work great, but I’ll probably pick some other stuff up at some point to get some more options. AKG451’s are at the top of my list–I LOVE those. Positioning is closer to the cymbals to close mic them more than get an overall kit sound.

Ride/Tom 3: I have an additional KSM44 on a stand for mic’ing either the ride or an additional floor tom if the drummer wants it. When mic’ing the ride, I put the mic underneath the bell and as close as I can get.

Have any favorite drum mics and techniques you just love? Please add them in the comments because I’m always looking to experiment.