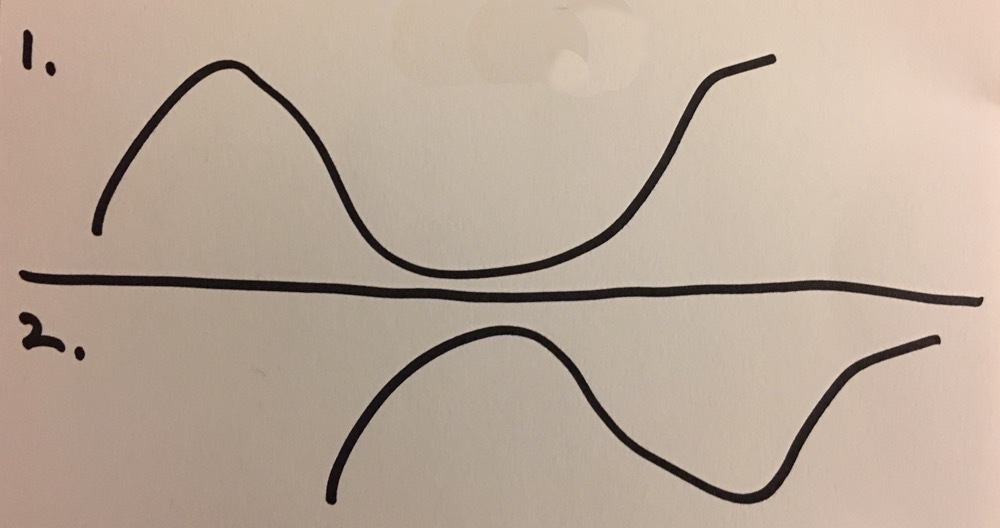 I’ve been traveling a bit training audio teams lately, and something that often comes up is the idea of Phase. Phase can be a confusing topic, and I think part of this stems from a misunderstanding regarding a small button on our consoles.

When most mix engineers and studio engineers talk about or refer to “Phase”, they are usually talking about polarity in relation to the POLARITY button on a console which is often mislabeled and misspoken as the phase button or switch. Phase and polarity are NOT the same thing, though. This is confusing, though, because flipping polarity may alleviate some phase problems.

Polarity is all about an electrical signal. I’m not going to do this any justice, but when we talk about polarity with audio we’re talking about whether our audio’s electrical signal has a position or voltage above the median line. In other words, if you look at a visual representation of a waveform as we might see it in a DAW or on a scope, does the waveform go up or down first. That’s all polarity is.

Phase, on the other hand, is about a time relationship between two signals.

In the sketch below hastily scribbled on hotel stationary, we have two signals(sine waves) that are out of phase with each other. They are out of phase because Signal #1 is earlier in time than Signal #2.

The result of being out of phase is something a lot of us learned in basic high school physics. When those two signals combine, they’ll add up to nothing where they combine in time because we have a peak in signal #2 adding with a null in signal #1. In terms of what we’d hear, we’d hear either silence or at least a big dip in volume where they overlap in time.

One way we might deal with this as a mix engineer is to hit our polarity button on the console on signal #2 which gives us this result: 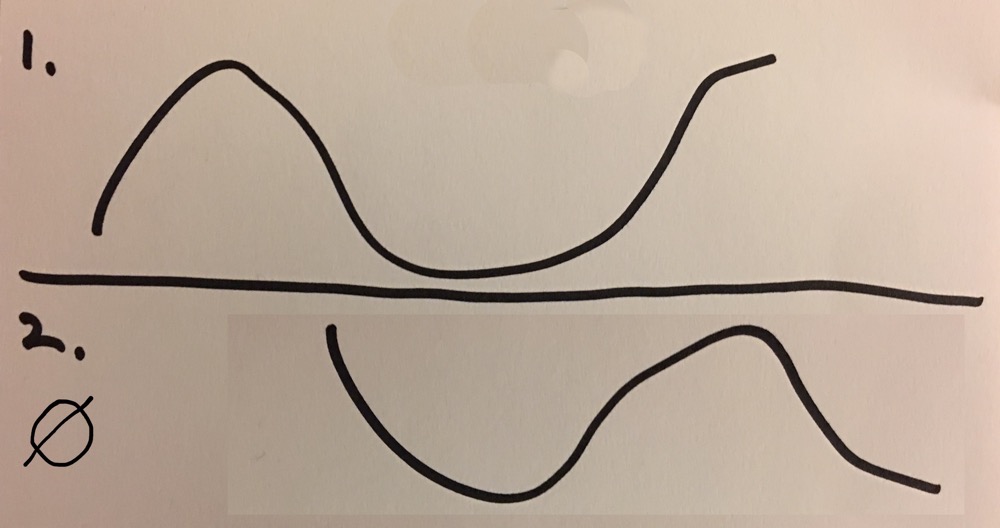 Again, this is basic physics, and we’ll now have addition when our signals combine.

This is fine for the two simple sine waves here, but we deal with signals that are much more complex in the audio world because our sounds are made up of multiple frequencies. Since every frequency has a different wavelength, flipping polarity on a signal might fix things at one frequency or for a range of frequencies, but it might also create issues at other frequencies. Sometimes those issues are negligible, but not always.

The Beta 91 is closer to the kick drum beater so it receives sound before the 52 which creates a time offset that can often cause a phase issue. The result is a wimpy kick drum because of cancellations in the low frequencies. Sometimes flipping the polarity on one of the mics fixes things leading to that wonderfully fulfilling chest-thumping kick drum. However, sometimes flipping the polarity just shifts things around so either way the kick sounds like junk.

This is because flipping polarity only changes the nature of the electrical signal from positive to negative or vice-versa. Flipping polarity doesn’t change time, though, and we still have a time offset. Delaying the earlier signal to be in time with the later signal can sometimes help with this, but there can still be more complications.

For example, let’s say we have a Bass DI and a Bass Amp with a mic on it. The bass signal hits the DI first so the sound in our mic is late relative to the DI. The speakers in the amp, however, may also add their own phase shift or group delay, though, because any time we have a wavelength that is longer than the diameter of our speaker, it is difficult for that speaker to reproduce the frequency. Bob McCarthy refers to this as a special order. Just for reference, 80 Hz has a wavelength of about 14′, and I have yet to run into a bass amp with a 14′ speaker.

The result in the case of most bass amps and subs is as frequency drops, time–or phase shift–is added to the signal. In other words, it’s like adding an incrementally longer delay to each individual frequency as the frequencies go lower.

So how do we fix an increasing delay as our frequency drops?

Sometimes we just can’t fix the problem, though.

Sometimes the solution is simply muting one of the sources. If you could look at a lot of my mixes both at FOH and in the studio where there are multiple mic’s on things, you’d probably notice in a LOT of cases I only end up using one mic because to my ears one mic often sounds better than the combination. Your mileage may vary, of course, but that’s not my point.

What I’m tryin to get at here is phase is not as simple as a button we can flip on or off on a console because the phase issues we encounter are often much more complicated thanks to the frequency content of our sounds. Should you experiment with flipping polarity to try and alleviate phase related problems? Definitely! Just don’t expect it’s going to solve every phase related problem because you’re not flipping “phase” with that button, you’re flipping polarity.