Today I want to talk about a theory and opinion of mine. A couple weeks ago I was talking speakers with somebody, and they referred to certain loudspeakers as being “bright”. This isn’t the first time I’ve heard this said about a speaker. In fact, I often hear these comments made in regards to some of my favorite offerings from Meyer Sound and L-Acoustics. I can understand some of these remarks when making a comparison to another speaker as in “These X boxes are brighter than those Y boxes.” However, the tone of these brightness comments is typically derogatory. But I have a hard time taking stock in these opinions, and I want to offer an idea about why boxes might be perceived as being bright.

When someone tells me they think a loudspeaker is bright, I interpret that as a judgement on the frequency balance of a particular loudspeaker. What I hear is someone believes the upper-end of the frequency spectrum is skewed relative to the rest of the frequency range of the speaker. However, in the case of live sound loudspeakers, I’m not so sure this is always the case when a brightness judgement is being made.

Let’s look at Meyer Sound as an example because I’ve worked with their speakers a lot, have had all types of experiences ranging from rough to amazing, and they often get referred to as being bright. Personally, I don’t think of Meyer loudspeakers as bright. On the contrary, Meyer’s loudspeakers tend to be very linear in their output. Basically, this means that the signal you send to the loudspeaker is reproduced without much colorization; what you put in is what you get out which is an admirable quality in a loudspeaker. On the other hand, if everything sent to a loudspeaker comes out brighter, I would venture a guess that the loudspeaker’s performance is NOT linear because the speaker is emphasizing the upper-end of the spectrum.

So if Meyer’s loudspeakers are linear, why do I think that some folks perceive them as bright?

Honestly, it might be the fact that high-end loudspeakers like the offerings from Meyer and L-Acoustics often exhibit a more full-range frequency response and higher fidelity than mid- and lower-end loudspeakers. If someone isn’t used to working on boxes with an extended frequency response, their perspective might be a little off. However, what I believe is more often at play in these observations is related to our old-friend, Equal Loudness.

A lot of times when I hear people complaining about bright loudspeakers, they are typically evaluating performance using commercially released music at higher-than-average listening levels, and I believe therein lies the problem. 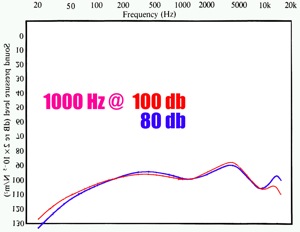 The photo here on the right shows a couple of inverted Fletcher-Munson curves to help demonstrate our ears’ EQ as volume changes. The blue curve represents our hearing perception when we hear 1000 Hz at 80 dB and the red curve represents our perception when 1000 Hz is 100 dB. Just by looking at this diagram you can see how our ears increase sensitivity around 4 kHz as level increases. Not so coincidentally, the 8th octave centered at 4 kHz is where we perceive brightness. You can also see here how our ear loses sensitivity around 4-500 Hz as the level increases. This is located in the 5th octave which is where we perceive warmth.

So an important thing to note is that our ears don’t just get more sensitive to one frequency range. The entire balance of our hearing tilts as level changes. So at higher levels, our ears perceive things with less warmth and more brightness. However, since our perception of warmth and brightness are directly related to each other, the tilting ends up accentuating the change in our perception. Consequently, we don’t just hear things a little brighter at higher levels; we hear things a lot brighter.

A seasoned FOH mixer building a mix at high SPL’s will naturally compensate for this sensitivity change while creating a full, balanced mix. The PA optimization curve may help or hinder this, but it’s ultimately irrelevant because the mix engineer will make tonal decisions at the console to achieve a balanced mix.

On the other hand, an experienced studio mixer typically balances the frequency spectrum of their mix for an average listening level. They may have a goal of getting their mix to sound good at high and low levels and make compromises to have things translate at different volumes, but they’re not typically creating a reference level mix for evaluating sound reinforcement systems at higher levels. As a result, when we crank our commercially released music on a linear, full-range PA, it will be perceived as being brighter than when we listen to the same mix at a casual listening level. Of course the issue doesn’t just apply to commercially released music. This phenomena occurs with any of our inputs because the reality is everything we run at a higher volume is going to be perceived as being brighter than if it were lower in level thanks to the principle of Equal Loudness. On a side note, it should really be called Unequal Loudness, because there is nothing equal about the way we hear as loudness changes.

This is why I prefer to evaluate loudspeakers through actual use instead of using recorded material. Whenever I can, I want to work up a mix with the box to hear what it can do and to see if I can get it to do what I need and want it to do. If I do have to settle for using some of my reference tracks, it’s always important that I reference them at the same volume I’m used to hearing them at because perception changes with level.

So next time you think a speaker sounds bright, you might double-check that it’s actually bright and not just loud.