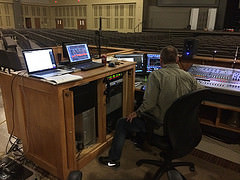 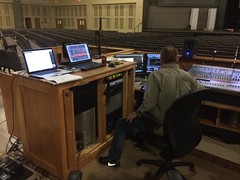 As you may recall, last September we installed a new PA in our West Auditorium. By and large we’ve been very happy with the way the new system has been performing. I really worked hard not to do much to it after the initial few weeks of the install so we could break it in and live with it for a while. As everything has settled in, one area we realized we weren’t satisfied was with the performance of our outfills.

PA’s like ours are always an interesting animal to me. Last time I counted I believe we are just shy of 50 boxes in the system spread across the mains, subs, and fills. It’s not really a complex system, but there’s a good bit of it and I think whenever you start crafting big systems like this you’re bound to run into places where you have to pick some sort of compromise.

When we installed the outfills, I had some reservations about the initial positioning of the boxes. We talked through the pro’s and con’s of repositioning them, and ultimately we left them where they were with only a minor adjustment. Based on the feedback I’ve received on this area of the system along with my own persisting uneasiness, I think I made the wrong call, though. It happens.

A couple months ago I started examining this area of the PA to see if anything could be done. My first step was a lot of measuring and listening to things and tinkering around in the DSP. Through this it became pretty evident there was nothing electronic that was going to fix things so I started talking with Clark who designed and installed the system.

My friend Ed Crippen over at Clark came out about a month into the process to investigate things himself and almost immediately confirmed my belief that somewhere in the process our outfills had landed in the wrong place. But like most things that go wrong, the reason why isn’t always so simple.

One of the original concerns some of us audio-folk had with installing a new PA in the West was related to acoustics. When the West Auditorium originally launched, it was an experiment; the West is our local video venue when it comes time for the message on Sundays. Nobody knew if the video-church concept would work for speaking when it was initially launched so Plan B was to use the room as a multi-purpose room if video-church fell through. This informed the acoustic design of the space. Obviously, video-church worked because the concept originated at North Point has been adopted beyond our walls and churches, however, the acoustic design of the room has remained untouched.

The East Auditorium features a lot of absorption on the walls, but I was told there was initial concern about treating the West the same way because the possibility existed the room could one day become a gym. Acoustic treatment, as many of you probably know, can be very expensive, and I believe there were concerns about damaging it. So the room was built utilizing RPG DiffusorBlox® instead of traditional fiberglass-style absorption.

The West was always a livelier sounding room than the East using the original PA’s, and based on this there was quite a bit of debate amongst our production guys on the effectiveness of the DiffusorBlox®. I wanted to reserve final judgement on the acoustics as much as possible until after the PA went in because my friend, Chris Briley, had told me how great the room had been when he had brought in a couple concert-level rigs over the years. Still, when we were installing the new outfills, I can’t say I wasn’t a little gun-shy about the walls and this was part of the conversation we had on their position.

Part of the reason I didn’t push more on the initial outfill positioning was because we were concerned about what would happen if we pushed too much energy into the front- and side-walls of the room. I knew from experience in the East where there is a lot of treatment that the outfills energize the room and create some not-so-nice slaps, and that was always in the back of my mind during the initial install.

The riggers pre-rigged the outfills a week or two before the actual install and repositioning them differently during the install would have added half a day to a day of work for them on a day we were supposed to be full into optimizing the system. Moving the boxes would have also moved the optimization back a day which would have put me in a bind because Steve Bush from Meyer would not have been able to be on-site for the new last day leaving me to finish optimization on my own.

Could I have done it? Sure. But I knew I would feel a whole lot better about things if Steve was there for the entire process.

So, faced with the potential of adding a day to the process and putting myself in a less-than-optimal situation for a system launch, I opted against spending a day on something I thought might backfire on us. And it’s not like we didn’t listen to the outfills before we all signed off on the positioning . There was always intelligibility throughout the area, but we just weren’t getting wowed by the boxes.

Now, a lot of people probably wouldn’t have bothered to even look at making this area better and written it off as one of the many compromises of system integration. After all, this area of the room features the least desirable seating. However, aside from just trying to make things better which is a natural component of North Point’s DNA, that area of coverage really does matter to us quite a bit.

You see, our West Auditorium tends to fill up after the East is full. Because of the way the rooms sit, the majority of people enter the West at the front of the room on the far sides. This means just about everybody walks directly through the coverage of the outfills and often after programming begins, and we feel it’s just as important to greet everybody with a great audio experience as when they are in the seats.

Think about it: Your friend/neighbor/brother/etc. invites you to go somewhere, and you finally give in and accept the invitation. You get stuck in traffic and crowds and end up getting in late so now you’re walking into this place you’re not sure you really want to be at in the first place. If you walk in and you’re greeted with an experience that’s just “meh”, how would that make you feel compared to something that sounds great? We believe our services start the minute someone sets foot on one of our campuses so if there’s something we can do to make an experience great at every step of the way, we try and do it.

So Ed came back out a couple weeks ago with riggers in tow to move our outfills. The process took two days with most of the first day spent relocating the speakers. Ed and I started in the morning using Meyer Sound’s MAPP to model the refined positioning while the riggers dropped the first boxes. We ended up bringing the boxes onstage a couple of feet and rotating them a good bit to extend their coverage as far forward in the room as possible while also covering all the way to the side walls of the room. We finalized the position by listening to the coverage after the riggers got the boxes back up in air.

Once that was finished, we started working them into the system, however, this got a little more complicated than I initially expected it would. The original positions of the outfills had impacted the original optimization enough that we ended up touching up most of the other fills for the system. Fortunately we left the main arrays untouched largely untouched. The entire re-optimization probably took just under a day when you look at how we spread the process across two days.

I think the results are definitely an improvement on what was already a great PA with clarity and coverage on the far sides definitely improved. Through the re-optimization we were also able to tighten upthe low. I think this room might actually have a slight leg up on the East Auditorium which is something that has never even been suggested in my almost 8 years on staff. Now I’m sure the coming months will see me trying to see if I can get the East PA on an even footing with the West, but I have a feeling the West might always have an edge thanks to that DiffusorBlox® we were so concerned about. There’s something about the room that feels pretty good.