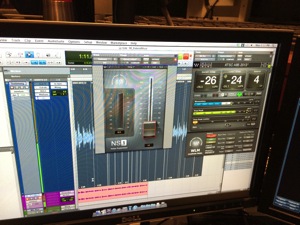 Back to My Roots

Lately I’ve been dabbling in post a bit which has been fun for me since the early years of my career were spent in that world. If you’re unfamiliar with what I mean by “post”, basically I’m doing post-production mixing/sweetening of audio for video. In this particular case I’ve been handling the post side of the audio for most of our baptism videos.

If someone wants to get baptized at North Point, one of the requirements is to make a video testimony. The videos are typically 1-2 minutes where the person being baptized tells their story of how they came to faith. Twice a month we perform baptisms in our services, and typically baptize 2 people in each service. The videos play right before each baptism with our keyboard player underscoring live from the stage. You can see some samples from our services here.

My job has been to get the audio for the story videos ready for the service. I usually do a little bit of cleaning up any edits done by our video editor. Then it’s basic mixing/sweetening. The quality of audio coming from the video shoots has dramatically improved since I came on staff, but there is typically still some cleanup.

I believe the audio is being captured via a Schoeps shotgun mic these days, which sounds very natural to me to start with. However, the challenge is these videos aren’t filmed on a dedicated soundstage and the people telling their stories aren’t professional talent, so there can be varying degrees of noise to deal with along with inconsistent levels and/or tonality.

I receive the audio in the form of an OMF file which I import into Pro Tools 10. I do all this work right in the auditorium using my FOH Pro Tools rig which allows me to go back and forth between the PA and my nearfields so I can make sure things will work in the room, but also still be good for broadcast.

Step one is clean-up. For a long time each of the story videos was a single take, but a few years ago we started using B-Roll in the stories which gives our editors the opportunity to make cuts if needed. Sometimes the audio side of these edits isn’t the cleanest. They might cut in the middle of a breath or create a pop, so my first task is to clean all this stuff up. Sometimes the video editor might have removed pieces of audio altogether so I might have to recreate presence or “room tone” in those gaps in order to smooth everything out. The beauty of getting the OMF is that the edits I receive are all non-destructive so I can adjust the editor’s audio “cuts” as necessary to make things sound the most natural.

Once that’s complete I import my template into the Pro Tools session using the Import Session Data function in Pro Tools. This sets up stuff like my mix bus and input channel processing. Since everything gets recorded in the same room with the same equipment, I’ve developed some basic settings that seem to work well to start.

My current signal chain on the baptizee is typically a compressor(Waves CLA-2A) into an EQ(Waves Renaissance EQ) followed by a first stage of noise reduction(NS-1). The Mix Buss has a Waves L2 for limiting followed by another stage of optional noise reduction(Waves WNS) and finally loudness metering(Waves WLM+).

The EQ stuff I do is pretty subtle. It’s a high-pass and some little bits of EQ here and there. The compressor does the bulk of the work for me usually doing around 3 dB of compression, but I’ve hit it fairly hard at times and been happy with the results. The CLA-2A is really smooth, but that also means it can be slow at times so I also use Pro Tools clip gain to adjust individual words from time to time. For example, a lot of people start really loud with “Hello”, and then taper off to a general level. In these cases I’ll use clip gain to bring the beginning down, and then just let the compressor do overall smoothing on the whole thing.

Noise is usually the biggest issue, though, with varying amounts of hiss from video to video. What I’ve found interesting is oftentimes the noise can be subtle on nearfields, but when I put things up on the PA it is very obvious. For most things Waves NS-1 works great, and it’s super-fast and easy to work with; who doesn’t love only having one control to deal with. NS-1 is like a souped-up expander for dialogue so it really just handles overall noise-reduction and tends to work on the subtler stuff. When there’s a lot of hiss to deal with I’ve been using WNS which is like a multi-band version of NS-1 so I can fine-tune the cleanup a little better only on the higher frequencies where the noise is most pervasive.

At times I have also experimented with some other restoration tools to try to deal with clicks and pops here and there, but I haven’t found anything in my current arsenal I’ve really been happy with quite, yet. Izotope’s RX3 is on my list of things to try, but I haven’t had a chance to demo it, yet. This entire process of me handling the post for these videos is still such a new thing so I want to make sure it’s going to be a longer term thing before I invest in something else for noise reduction and restoration.

The final link in my chain is the Waves WLM+ Loudness Meter, and I use the ATSC/85 2013 preset. I don’t need to use a loudness meter for these because there aren’t any specs to really comply to. However, I find this very handy to keep each video at a consistent loudness. Mainly I watch the “Range” to keep each video consistent, and this typically lands at 4 LU for me. Then I just use the trim feature on the plugin to instantly trim the overall level up or down to hit the standard I’m using which works great to keep my final level consistent with all the other videos.

After this is all done, I bounce out the final mix. I never use “Bounce to Disk” for this, though. I always record the final mixes live to a new audio track so I can hear them actually going down. Maybe I’m just old fashioned because I started out in the days when you had to listen to things in real-time, but I just always feel safer listening to what I’m printing. This also makes it easy for fixes later on because I can just punch in the spot that needs fixing, consolidate the clip, and export it.

Right now the whole process probably takes me 15-30 minutes per video depending on how much cleanup is involved. However, the more of these I do, the faster I’m getting with them. Pro Tools has come a long ways since I was doing this sort of thing on a daily basis, and they’ve definitely got some features now that are helping me get a more efficient workflow. It’s also been interesting for me because there will be times when I can’t remember how I used to do certain things in Pro Tools, but sometimes when I get into the zone of editing I subconsciously start hitting things and remember some of the editing tricks I used to use.

It’s been a nice change of pace to do a little bit of post lately, and I’m looking forward to doing more of this.

One Response to “Back to My Roots”