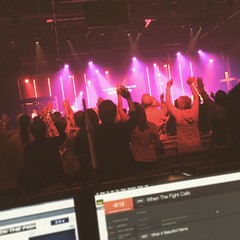 Here’s a story a good friend of mine loves to tell. A while back–maybe 8 or 9 years now–we did a Saliva tune as an opener at North Point. After the opener, an elderly woman approached FOH. I immediately made an assumption about the nature of her encounter so I quickly turned to my A2 and said something along the lines of, “You take this one.” Much to my surprise, the first thing out of her mouth to him was, “That was awesome!!”

Our Hillsong, Jesus Culture, Elevation, Bethel, etc. contemporary worship would not have happened without the so-called “old people” who went before them to create environments where that music could develop. Brian Houston, for example, who founded Hillsong Church is in his mid-60’s.

So what does all of this mean?

We have to be careful about the assumptions we make when we’re getting feedback especially when it pertains to different demographics. When someone we perceive as “old” says it’s “too loud”, I believe there’s a higher probability these days that it’s either actually too loud or that there’s something actually wrong with what they’re hearing. Maybe the band needs some work. Maybe someone on stage is not having a good day. Or maybe…just maybe…there’s something with the mix and the audio presentation that could use work.

Now, sometimes “too loud” can still mean “I don’t like this music” or “I don’t like the way the band looks”. That’s always going to be out there if you’re involved in audio, and you’re going to have to do some digging to find out what’s really going on if you’re getting those “too loud” comments. But don’t just discount opinions because of the age of the person delivering it. These days, a lot of “old people” like to rock.

If you get “too loud” complaints on a regular basis, I’d love to talk to you. That’s one of the things I look at regularly when I am providing training in churches. If you’d like to find out more about how I can bring audio training directly to you to help take your team’s audio game to the next level and cut down on the “too loud” complaints, drop me a line through my Contact page.