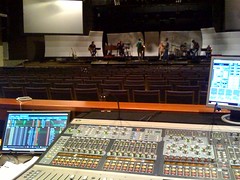 Today was quite a different day from yesterday. JJ and I were at NP until 11pm Monday night racing to get everything hooked up before they kicked us out of the building. We were about 98% there so I was in at 8:30 this morning to finish the last bit of setup at Monitor World. There were a few IEMs that ended up with the left and right flipped, but that’s an easy fix in the Venue’s digital patchbay. By 9:30 the band was making noise and full soundcheck was underway soon after. The rest of the day was spent working through all the house band tunes.

Today was my first time building a mix from scratch on the Digidesign Profile. I’ve played with the surface off and on over the last couple years, but the last time I spent any real time on it was when I demo’ed it in ’07. At the time I was playing with an existing show and tracks. All in all I’m digging it. There are a couple of things, though, that it’s missing that are kind of a bummer. The biggest thing is there is no way to adjust the width on stereo channels and groups. If you never used the feature on the D-Show, you probably wouldn’t miss it. But I missed it a ton, and I think it’s kind of silly that two years later this is a feature that’s still missing from the surface. Hopefully it will get added in a future update. The other thing is minor, but I was missing my more detailed channel meters from the D-Show. It’s a tradeoff to get the compact size, but I think it’s a little easier to set gains on the big daddy D-Show. Lastly, I really wish I could have a selected channel fader. That Master fader is worthless to me because I run my subs on an aux. Pulling the master down throws off the balance of the mains and the subs.

On the other hand, I absolutely love the size. It is so very cool to have everything within reach without stretching. The lack of meter bridge also rocked because it let me get the surface up higher than we can put our D-Show. I have seats right behind FOH so obstructing them with a minimal amount of gear is nice. I have our D-Show up about as high as I can get it without getting comments, but I end up hunched over when I stand to mix music. The Profile is up a few inches that will make a huge difference on Thursday when I’ll spend most of the night standing in order to see the band over the heads of the crowd. I also feel like I have better sight lines with the console thanks to zero distracting meters on a meter bridge and all my display monitors out of the way. I will probably start rethinking monitor placement when I get the full size D-Show back.

I have to say, though, at the end of the day if I was purchasing a new Venue, the Profile would probably be my first choice for control surface. The D-Show has some more easily accessible features that can help while building a mix, but I think the size of the Profile wins for driving the show. It took me a bit to remap my muscle memory, but that probably made the day more fun.

Tomorrow is a day for virtual soundcheck to refine and balance the mix for Thursday night. It’s also a day to get a better handle on arrangements for all the new tunes to figure out who’s playing what.