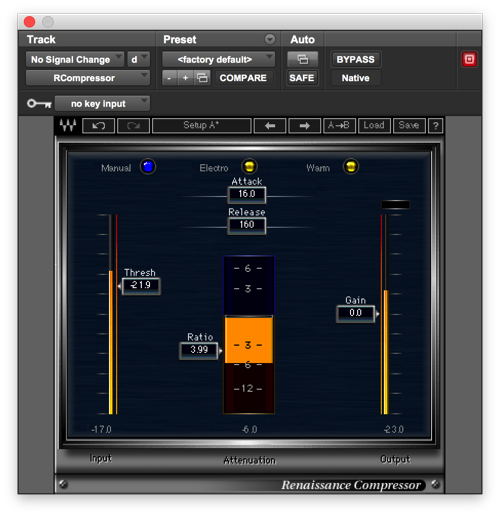 As I’ve been working with a variety of churches training their engineers, one of the biggest areas that typically needs education is the use of compression. This is part of the reason why I developed a class purely devoted to using compression; you can contact me through my website if you’d like to schedule a class for yourself or your team.

There is a bit of voodoo often associated with compression, and some engineers can be a little can get a little gun shy when it comes to using compressors which, in my opinion, is a healthy fear. But so is a fear of using EQ or adding delay or reverb or any other form of processing you have available. The reality is we can go off the rails at any point when we’re mixing so we shouldn’t be afraid to do something. You’ll never learn how to use something properly until you start turning the knobs for yourself.

I think compression sometimes has a bit more fear involved because it can be a little harder to understand how to use it. So how about a simple way for the uninitiated to get started with compression?

The biggest place most engineers need compression is on their vocals. Even a trained, professional vocalist can be somewhat dynamic so you can imagine what happens when we trade “trained professional” for “weekend volunteer.” Of course, this is one reason why many of us know and love these wonderful tools called compressors.

If we examine a vocal’s dynamics, we can break it down into a few different parts. For starters, we have the dynamics from section to section. For example, many vocalists sing the verse of a song–which is often in a lower part of their register–at a lower volume than the chorus of a song. Then we have the dynamics between phrases where a sentence or phrase may be louder or softer than the next. Next we can look at the dynamics from word to word, and for the exceedingly detail-oriented we can even look at syllable to syllable. Syllable to syllable may seem a bit excessive, but you would be surprised how detailed vocal treatment can get in recording land. Personally, that level of detail isn’t really my thing as I prefer things to be a little more natural sounding, and vocals are naturally a bit dynamic so we’re gonna stay a little bigger picture today.

Now, most of the fear associated with using compression in a live setting comes from losing gain before feedback. This loss doesn’t come from our compressor acting on a signal, though. It comes from any makeup gain that is being employed.

As a result of our compressor turning something down, we often employ “makeup gain” to makeup the difference in level that is lost. Basically, the compressor turns down our signal as the signal tries to get loud, and then we turn up gain to bring that loudness back up. This process in turn raises the quieter portions of our signal. That’s the basic gist of how compression is most often used: the box makes the louder stuff not so loud, and we turn up the quiet stuff so it all gets closer to the same loudness.

Every sound system has a limit of how loud we can turn something up before it begins feeding back into the system. It’s almost like a form of acoustic headroom. In an ideal situation, we will be as far away as possible from the point of feedback, but the reality is we’re often much closer to this than we’d like to be. There are some techniques we can employ to minimize feedback, but the key word is minimize. At some point, everything feeds back.

So if makeup gain is part of our potential issue with compressors, let’s skip it because there’s no rule that says we have to use makeup gain. Try this instead:

Push your vocal’s fader up until the vocal is at your desired level during the quietest parts of its performance. Ideally this will be around unity. With your vocal level set for the quiet parts, listen through the performance and note when the vocal is getting too loud. A little bit louder is OK. What you want to listen for is when it feels off to far off. Make a mental note when that happens in the song because we’re going to use our compressor to deal with this.

In terms of compressor settings, start with a low ratio of around 2:1. An attack of 10ms and a release of 100ms is usually a safe place to start on most console compressors so set those as well. If there’s a knee control, I would go with a soft setting. Raise the threshold as high as it will go so no compression is happening and insert the compressor on your vocal if you haven’t already done so.

When the vocal gets too loud, lower the threshold to get your compressor working. For now, just set the threshold so the compressor is acting on the loud stuff and don’t worry about how much gain reduction you’re doing. Just get it working on all the stuff you think is too loud so you get some gain reduction the minute it’s louder than you want it.

Now give the whole mix a listen and focus on whether those loud parts are still too loud. If they feel good, step away from the compressor, but if the loud parts are still too loud, begin increasing the compressor’s ratio. This will give you more control over the signal and increase the amount of compression. Again, don’t worry about the amount of gain reduction that’s happening right now. Just listen until you get the vocal closer to where you want it in terms of loudness. Personally, I usually end up around 4:1 for most worship vocals, and it is not unusual for me when working with non-professionals to go much higher and even all the way to limiting in some cases.

One thing to keep in mind here is we don’t need the compressor to do all of our work. If we try and get things perfect, there’s a higher chance we’re going to over-process things. So as you’re adjusting the ratio control, you should be listening to get things in the ballpark because things can get tricky as we begin increasing our ratio.

When a compressor starts working harder, typically doing more than 6 dB of gain reduction, the artifacts or “sound” of the compression can become more and more audible. Part of the skill in mastering a compressor is learning how to balance between the sound of it working and the work we need it to do.

In the case of a live vocal, we usually don’t want to hear the compression as much. If your gain reduction goes above 6 dB, you should start listening to make sure the vocal still sounds natural. In truth, you should always do this, but with higher gain reduction amounts you’ll really want to pay attention. Instantaneous gain reduction peaks of large amounts probably aren’t going to bug you much. It’s when the compressor holds the signal down that things can sound compressed. As you’re trying to learn and understand what this sounds like, don’t be afraid to overdo your settings in a rehearsal or virtual soundcheck environment.

If your vocal is beginning to sound “squashed” or “choked” or “small”, that’s a sign your compressor is working too hard. When the vocalist pushes, it shouldn’t feel like something is holding the vocal back. The chorus of a song typically has a bit of a lift relative to the verse so make sure you’re still allowing that natural dynamic to happen.

If you’re not sure where you stand on the natural to squashed scale, remember you can turn the compressor off at any time to listen to the original vocal. Also, don’t be afraid to ask the opinion of someone who’s not mixing, but don’t ask if it sounds compressed. Ask them how the vocal sounds. If they tell you it sounds “fine”, “good”, “great”, or some variation on that theme, you’re probably OK.

If things are sounding squashed, there are a few things you can do but we’ll stay pretty basic for now. Your best bet is probably to loosen up the compressor. You can do this by either reducing the ratio, raising the threshold, or doing a combination of both. Personally, I’d start with the ratio. Loosen the compressor as much as you can so the vocal sounds fairly natural when the compressor is working, but so that you’re getting the most effectiveness out of the compressor.

Your vocal may still get louder than you want in sections, but that’s OK because we have a fader on the console we can ride. The great thing about using a bit of compression, though, is your vocal will be easier to ride, and you shouldn’t have to chase it with big moves on the fader. You will probably make smaller adjustments between sections of the song that are easier to learn and manage. The compression will probably also make the vocal performance sound like a better performance which is a win for everybody.

I hope this helps if you’re getting started with compression. If you’d like to learn more about compression and how you can take your audio game to the next level, I am currently booking training session for the fall. Contact me HERE to find out more.

3 Responses to “No Makeup Gain”