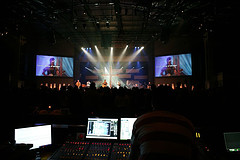 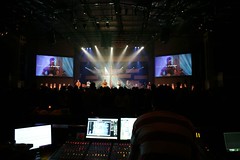 So here’s a rundown on some of the new stuff I’ve been adopting after attending Robert Scovill’s FOH course. A big theme of the course was coherency (system, mix, performance) so a lot of these fit with that. I’ll focus on drum stuff for now.

Overheads: Previously I was using the overheads more as close-mic’s for the cymbals. A few weeks ago I moved our overheads into an XY configuration. I was referring to this new approach as more of a “studio” approach around the office, but I’m going to stop because from looking around it is really sort of an approach unto itself. It IS more of a “kit” mic’ing approach, than a cymbal mic’ing approach. The idea is you get your overhead elements right next to each other so you get phase coherent arrival times of everything in the overheads; so, for example, your snare drum arrives in the left and right overheads at the same time. If you want to space your overheads over the kit you can get the same sort of thing if you measure the distance of the snare to each overhead and keep it consistent, however, you’ll still have different arrival times for everything else in the kit. The XY approach gives you coherency for the entire kit. I picked up an a mic stand adapter Scovi showed us that Shure makes for setting up mics in XY.

Since I was moving mics around, I used this opportunity to try some AKG451’s for overheads. I love these mics, but I wasn’t particularly sold on this role for them, although Dustin was bummed in the studio when I switched back to the KSM44’s. At some point I’m going to pick up a Rode NT4 to try out. I’m also going to try our 414’s when I get them back from Buckhead, although I’m guessing they wants their 451’s back first…

Kit/Tom Gates: I adjusted my gates so that they’re expanders. Something Robert talked about is that when two signals are interferring and comb filtering is taking place, if one of those signals is at least 6 dB less the comb filtering won’t bother you as much. So I’m letting my gates breathe a little more now just taking them down enough reduce comb filtering…and cymbals along the way… Previously I was only using gates on the toms, but I’m experimenting with them again on the snare and kick here and there; I’ve been playing with them in rehearsals, but I don’t think I’m leaving them on for actual services.

One benefit I’m finding of using expanders on the toms and the new way I’m using the overheads is I’m not losing as many tom hits to gates that are too tight. With the overheads giving a better picture of the overall kit and the gates set as expanders, the lighter hits still come through. Eventually I’m going to key my gates with a trick Scovi gave us, but I need extra channels to do it, and I don’t have them right now. In the meantime this is works better than using the snapshots to tweak the gates for each song or relying on memory to punch them in and out where necessary.

Kick mic experiment: One last thing I tried with the drums is a new kick mic. I picked up a B stock Audio-Technia AE2500 to try in our kick drum. The mic feature two elements: a condenser and a dynamic. The mic fits with the phase coherency theme because both elements are phase coherent. I tried the mic out a couple weeks ago, and I have mixed feelings about it. On the one hand I thought it gave the kick a much more natural sound. On the Sunday I used it we did a Carrie Underwood song that I really liked it on. However, I wasn’t overly thrilled with how it worked on the rock worship. As a more natural mic, it lacks that aggressive hyped kick-drumness that I’m used to. We’ve since gone back to our Sennheiser 902/Shure Beta91 combination. I’m going to try the AE2500 again next weekend when I’m mixing in our west auditorium where we’re still running analog and I don’t have the same tools to do all the time alignment stuff I can do with the Venue. The bottom in that room is also more of a challenge so I’m going to see how it works.