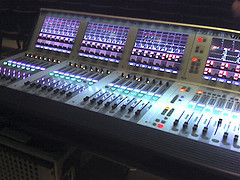 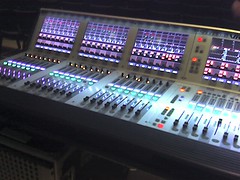 Today I had the privilege to play with the Soundcraft Vi 6.  We had a demo of it up at Browns Bridge and got to do a very small A/B between the Venue and the Vi 6.  There are definitely some nice things about the console.  The one feature I wish I had in the Venue is the ability to program a 2nd input for each of your channels.  This would come in handy for me for our backup mic.  On the Vi 6 you can program your backup mic to that 2nd input and flip between the two as needed by making a quick selection right on that channel.

While my experience working with the Digico desks is extremely limited, I did like the touch-screens on the Vi 6 a little better.  They just seemed easier to use.  The multiple screens were nice and gave me some ideas for Venue feature requests…  The encoders have a really nice “analog” feel to them with a little more resistance than our Venue’s.

There were definitely some things that I couldn’t find like a fine adjust mode for EQs and compressors.  I was also looking for a quick way to reset the channel settings; I found how to flatten the EQ, but nothing on resetting dynamics, aux sends, busses, etc.   But I only had a few hours with the console and may have just been unable to find these things.  Unfortunately, the fact that there is no delay compensation for double-bussing inputs would be a deal breaker for me.

The Soundcraft rep who brought in the console said that the product is really still a work in progress so if the stuff I was missing is actually missing, there’s no reason why it might not show up in the future.

For now and most likely the foreseeable future, the Venue is still my preference for a FOH console, but as the Vi 6 continues to develop it might prove to be a pretty decent monitor console; it has 35 output busses which goes 11 more than the Venue….