I’m a big fan of linear PA’s, but as I’ve written about in the past, a flat line in a measurement rig does not always correlate to a linear loudspeaker response. I feel like a lot of system engineers and tuners don’t quite understand this, though, and as a result I run into a lot of neutered PA’s in the wild where all the guts and oomph have been EQ’ed out of the system. I’ve also run into another side of this where a system tech will defend this approach saying if he doesn’t do this I’ll have to EQ the vocal mic a lot. So let’s look at this.

This is a photo of a properly used live vocal mic by a female vocalist. Some of you are probably thinking “ewwwwww” at the lipstick residue, but to me it’s a sign she was right on top of the mic where I’d like her. Plus, a little bit of Microphome will clean that right off.

The reason I want vocalists that close in a live scenario is because it increases the amount of the voice (aka signal) in the mic relative to the other acoustic stuff like acoustic cymbals, backline, PA, etc. on stage (aka noise) in the mic. So when a vocalist gets right on top of the mic, I get a cleaner vocal at the microphone with increased gain before feedback.

Now, here is the frequency response of a Shure Beta 58a courtesy of Shure. Take a close look at the lower frequencies. 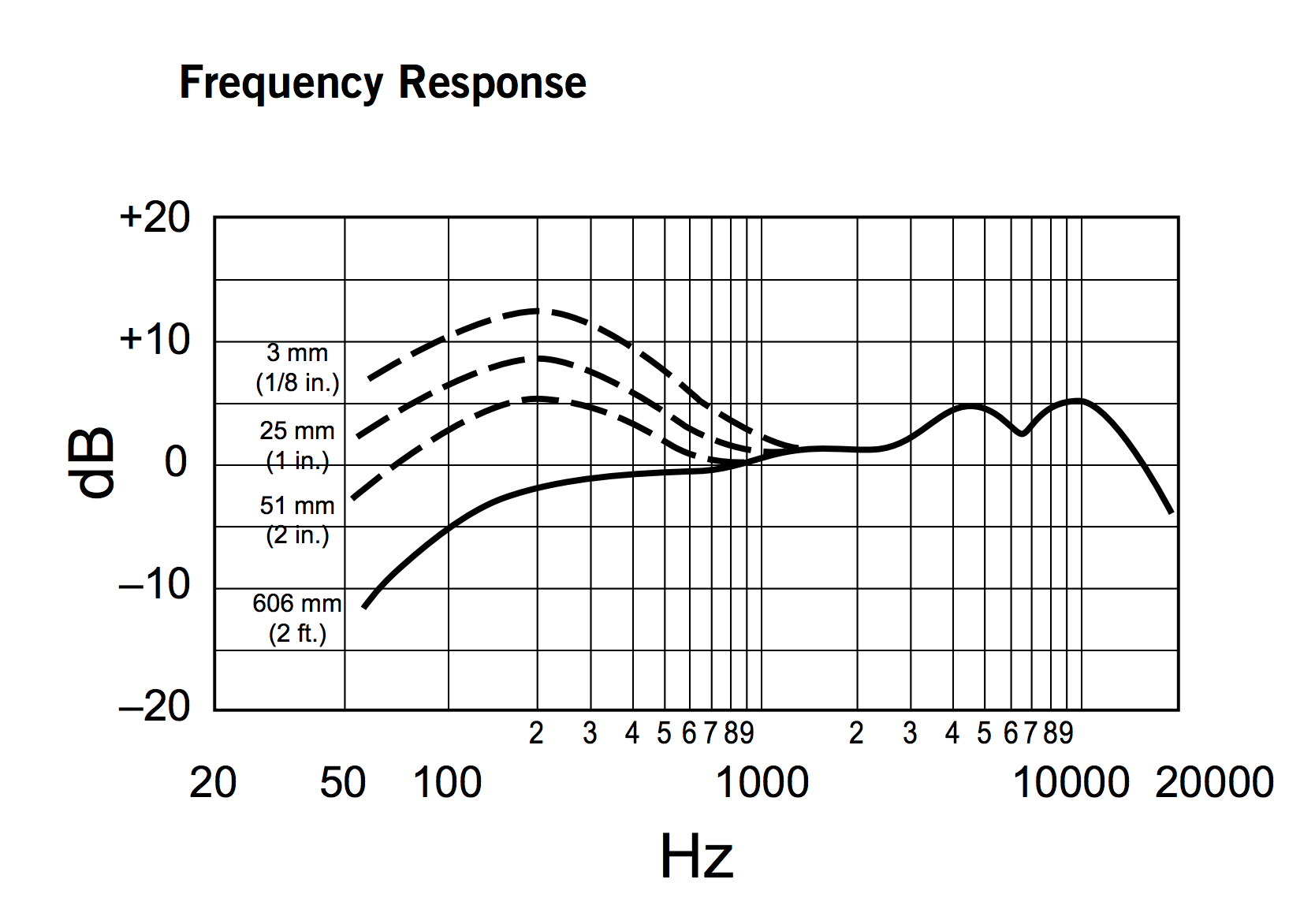 Those dashes represent how the proximity effect of the microphone affects its frequency response. Proximity Effect is the term we use to describe how a directional microphone’s frequency response changes depending on the distance of the microphone to the source. We can see here that as the distance from the source decreases, we have a rise in frequencies below 1k. The 3mm response curve is quite representative of a vocalist who is right on the mic. Notice that there is a very wide bump of about 15 dB centered at 200Hz with that 3mm response curve. Read that again:

What I’m really trying to get at, though, is it doesn’t alarm or bother me one bit if I have to pull 10 dB out of a Beta58a because I understand how the microphone works both from experience as well as looking at the frequency response chart. Based on these things I know I should have to EQ that area quite a bit.

There’s a problem, though, when someone EQ’s the PA to account for the response of a single mic like a Beta58 on a vocal: Not everything in the mix is a vocal on a Beta58.

Speaking of snare drums, I was having a conversation with a great drummer not too long ago who was a little confused regarding the exaggerated use of the Waves Torque plug-in in some of the churches he’s playing in. He was talking about how some FOH engineers are trying to get that Bethel snare sound, but in the process they’re taking his already detuned snare and creating strange artifacts or sometimes even making it sound unlike any snare drum at all.

So let’s take a look at something. I ran Raise A Hallelujah off Bethel’s latest release into Smaart and took a screenshot which you can see below.

I marked the snare hits here which have a lot of energy around 160-170 Hz. That’s on the lower side for a snare fundamental, but it’s not unusual for me to boost around there or even lower on a snare drum when I’m trying to beef it up. I think, in the context of what I’m trying to get at today and my drummer friend’s concerns, a lot of guys might be reaching for the wrong tool to solve an issue that isn’t even mix related. Torque or some other form of pitch modifying processor can do some cool things and be a great tool, but a plug-in isn’t really going to help if your system has been neutered to begin with.

So how do you know if your system needs some meat put back into it? That’s a tough question to answer because there is definitely some subjectivity to what a PA should actually sound like or rather, how it should reproduce music, speech, and everything else you put into it. Your best bet would be to take some good measurements of your system or better yet bring in an expert like me to give things an evaluation. If you want to check on your own, here’s something you can try, though.

Take a look at the frequency response of your favorite directional live vocal mic and check out what the proximity effect on it does to the response. If there’s no data available on the proximity effect response, use a mic like a Beta58a. Have a friend to take that mic on stage and have them get right on top of it and talk into it. Now, flatten the EQ and turn on a filter centered at the peak of the proximity effect with a wide-ish Q and pull out at least half of what the bump is. For example, on a Beta58a I’d try taking about 8 dB out. If his/her voice or vocal gets too thin from taking that much out, you might have a neutered PA that may be affecting how you and your team are mixing on it. I say “might” because there could be other factors at play like processing somewhere else in your signal chain along with your own personal tastes.

One way or the other, if you’d like to know for sure and get some help with evaluating your PA or even re-tuning it, I’d love to hear from you. Please message me through my Contact page and let me know how I can help. I still have some openings in my schedule this year if you’d like to have me look at things before your big Christmas services.

5 Responses to “Neutered PA’s, Lipstick Residue, and the Bethel Snare”

TweetShare
If you enjoyed reading this post, please share it!
Neutered PA’s, Lipstick Residue, and the Bethel Snare