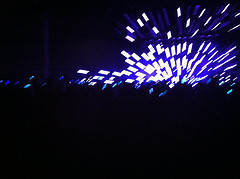 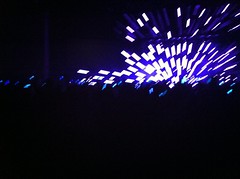 As of Sunday, my work for 2012 is finished, and it feels pretty good. Before I go dark for the rest of the year, I leave you with some photos and notes from our Christmas Celebration this year which, by the way, is available on demand for the next few days over at http://northpointonline.tv.

Mixing Christmas this year was one of the more complicated things I’ve mixed in a quite a while. I have to give a big shout-out to the rest of our audio crew because they worked their tails off backstage to make sure everything came off without a hitch.

This was mostly because we did a musical number in the middle of our welcome segment, and we just don’t really ever do these things. This led to a few more snapshots than I would normally do that were doing things I don’t like to do–namely routing changes. Those became necessary in order to facilitate some of the bussing needs I have on the console in order to get mixes to other parts of the building.

This year we opened a third venue in our Theatre with a live band for most of the music, but they were still taking a feed from me for a good portion of the morning. So I needed to make sure they had a mix that worked for them which was namely a dry, unprocessed mix of what I feed my PA. In the meantime I also needed to feed a processed program mix to video world for halls and tape along with some other needs for our campuses since they were receiving the message from my room. I needed to do all of this within 8 channels, and it’s amazing how fast those go when you start making stereo pairs. So what I ended up with was a processed 2-mix, isolated message mic, isolated robot speak(for our opening number–just in case), isolated videos and keyboards for the message, and a dry 2-mix for our local venues. It seemed to work OK, but I wasn’t happy with some of the levels on some of the isolated stuff so that will be something I’ll probably be looking for a new solution to next time. 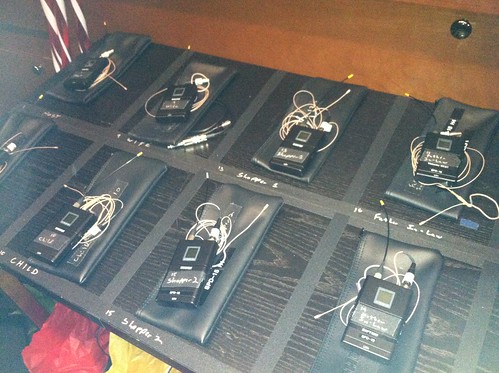 Locally in my room, my main challenge was the musical number which was a parody of a tune from Les Mis. As I said, we just don’t really do these types of things so it was immediately a challenge. The number featured 8 actors along with a chorus of 20-30 people. The actors were mic’ed with Countryman E6’s, and the chorus was thankfully on tracks since they were moving around the stage quite a bit. The music was a mix of tracks and live band.

I initially looked at putting together halo rigs to do hair mics on the actors. I’ve never really done that so I was really kind of interested in giving it a shot. Thankfully, though, my fellow audio staffers at our campuses dissuaded me from this. It’s still something I’d like to try doing at some point, but when I looked at our scheduling for rehearsals and the time leading up to them it seemed a little riskier than I wanted on Christmas. Plus I knew that 8 open omni-directional mics on stage with music would be enough of a challenge as-is, so I opted for Countryman’s which we rented from Audio Vend in Texas.

I know a lot of people like to bag on Countryman E6’s, but they worked great for this. I know there are other mics out there that many prefer these days, but I still haven’t found anything that looks as good on camera. And that is a concern of mine since video is a big part of what we do. I don’t care if people are used to it these days. Call me old fashioned, but I think it looks tacky to have a big ol’ mic on someone’s cheek on TV. Here’s a screen capture from our online service: 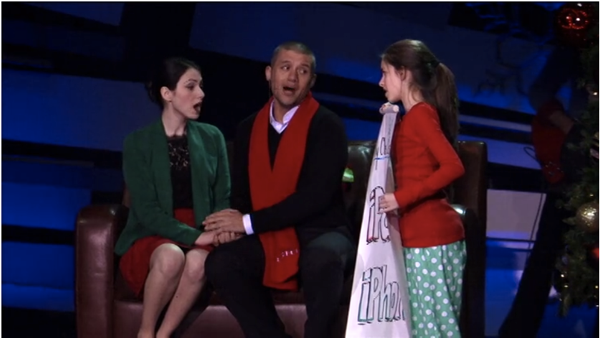 I can spot a mic, but it’s not obvious. These don’t completely disappear in close-ups, but I think they’re much more subtle. And they sounded great in the room.

Individual processing for the mics was done via channel comps and EQ’s. I then routed all the actor mics to a group where I had a parametric EQ to ring them all out along with a Waves C4 for some multi-band processing to keep things controlled when everyone was singing. I also ended up using my Shure DFR-11 on the group for last resort feedback elimination. I had plenty of gain before feedback on each mic but had a little bit of ringing at the end of the number when I had all 8 mics open. I could have used the 5045, but I didn’t think the 5045 would help me with the feedback I was anticipating. Since the 5045 is really a souped-up expander, I knew that when everyone was singing it would just stay open and wouldn’t catch the stuff that would take off running. For that I needed EQ. I got that as close as I could, and then for the sake of time I let the machine do the rest. I always feel like I’m cheating using the DFR, but I just didn’t care this time because the number was complicated in and of itself.

It’s a musical number so people are coming on and off stage, and I needed to ride every single mic throughout. I had some loose notes I used during rehearsal, but in the end it’s all about memorizing everything and thanks to plenty of rehearsals and an afternoon of virtual soundcheck I was able to get everything down. It reminded me of mixing musicals in high school, although, I had a few more tools at my disposal than I did 20 years ago. 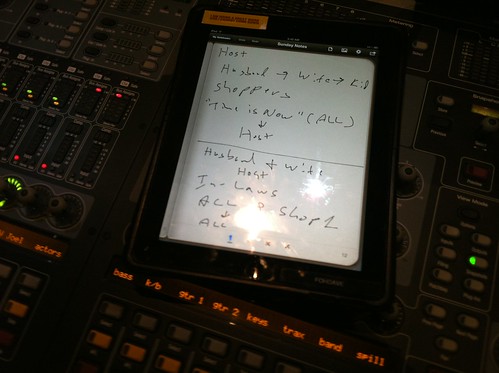 Overall, it was a fun service to mix because it keep me on my toes. Now I’m looking forward to a bit of time off with my family. I hope your Christmas services all went well. Enjoy the rest of the holidays, and I will be back in the new year.

One Response to “Merry Christmas!”