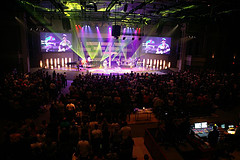 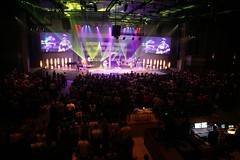 The show is this week, and we kicked off rehearsals this afternoon. Todd’s band arrived just around lunchtime and started loading in. Todd’s drummer, Ashley Appling, brought in his Gretsch kit for use this week so we struck our regular kit so he could set up. Since we had to take the shield down to setup the new kit, we decided to try and leave it down to see what happens. I was honestly amazed at how much a difference putting the shield up makes because later in rehearsal we threw it back up and the drums tightened up immensely. I think if our PA had more gas, we could get away without the shield, but everyone who gave it a listen was in agreement that we need the shield.

I wiped all my template settings before rehearsal today and started from scratch on all the instruments…well 98% of them…for now. I was pretty happy with the results, but now I’m hitting crunch time in how I’m going to handle my workflow for the show; I need to get it figured out before I can really start tweaking things. Here’s the situation. There are three bands. They are all using the same kit, but swapping out snares. Guitarists all have their own rigs. Bass players are all direct. Keys are being used by one band, but might get used by a second. We’ve worked it out so that every guitar and bass has its own inputs on the console. We’re sharing a couple vocal mics, but mostly for BGVs and never within the same set. Some of the sharing is going to get our monitor guys jumping, but we have total recall in the studio and at FOH so this shouldn’t impact the recording or audience mix side of things too much.

However, the challenge for me is how to organize things since there is sharing going on. When a given band is on stage, I want to have all their inputs in front of me on the top layer of the console. I have a couple of potential ways of doing this, but my preferred way requires the new version of the Venue software which might be a crunch to get and also makes me a bit nervous breaking in on a big show.

My original thought for approaching this was to get every input assigned to a channel in a 1:1 fashion; think of this as a traditional console look. When each band would come on, my plan was to use snapshots to digitally repatch and rename my top or main channel bank with that band’s channel. So basically when that would happen I would have their inputs sometimes in two locations. The main advantage to this is I get most of what I need on one bank. But I can still get everything on a dedicated channel in the event that a large worship jam should happen at the end of the night–doubtful, but better to be prepared for anything with these things. The disadvantage to this is that I get nervous, uncomfortable, jittery, etc., digitally repatching things. I’ve done it before and I’m sure I’ll do it again, but it’s the type of thing that I need a lot of time to check and re-check to make sure that everything always recalls properly. Unfortunately extra time for this is something I’m not going to have a lot of since the third band probably won’t be rehearsing until Friday morning and then we move into a full on production rehearsal in the afternoon. As if figuring out how to prevent potential ear fatigue wasn’t enough of a challenge…

My preferred console layout approach is to get v2.6 of the D-Show software installed. Using channel blanks and the channel safe options I can strategically lay each band out on its own bank just where I want. Mics that are shared can get double patched to empty channels and assigned to the bank for a particular band’s use. Then I’m really just recalling some small changes on drums and a couple BGV mics. The downside is it’s new software, but this will be my third or fourth upgrade and I have yet to have had a problem after an upgrade. From my perspective, this looks like the safest and best approach for workflow. Tuesday this week is a day off from concert prep, and I should know by the end of the day if I’m going to have the upgrade in time.