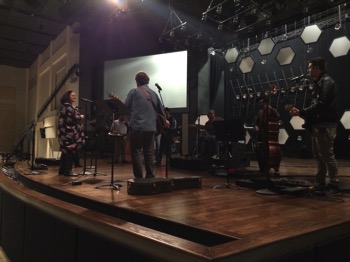 For our first week of December music, the genre was acoustic. The band consisted of: a cajon & cymbal, upright bass, dobro, mandolin, 2-3 acoustic guitars, 1 electric guitar, and 5 vocals. Sounds pretty simple on the surface, but it actually was fairly involved to maintain a natural sense within the mix. So let me break down how I approached this.

The acoustic bands were the only bands that never rehearsed with audio production in October and November so they were the last bands to get pre-production finalized. We rehearsed for Sunday on the Monday before Thanksgiving, and I don’t think I finished the input lists until that morning which was cutting things a little close for my tastes. In spite of the simplicity of the band, I still needed to wipe a most of our console templates because the instrumentation was quite different from our normal stuff.

One way to do this would be to just select everything and reset the channels in the console. The problem with doing that on the VENUE is it wipes settings for that channel and un-patches it, BUT it doesn’t reset the mic pre because the pre’s could potentially be patched to multiple console inputs. For me it was very important that the pre’s get zeroed, though, because I knew the gain staging for this was going to be completely different from what’s normally plugged into some of those mic pre’s. Personally, I believe it’s better to turn something up than to have to turn something down because there is often pain involved when something needs to be turned down especially when in-ears are involved. So I have a channel preset at FOH and Monitors that resets and renames an input while also zero-ing the mic pre.

Once the preset was loaded on the inputs I needed, I reset them to un-patch them, renamed them, and re-patched them. Normally no big deal, but I wasn’t feeling warm and fuzzy this partiular week because by the time I got around to this the band was set to arrive within an hour and I had four consoles to set. Plus there were some additional things that still needed a bit of setup since, again, the band was completely different. For example, I wanted to make sure there were extra reverbs ready to go at monitor world for some of the acoustic guitars. Fortunately, this was the first band in a very long time that I could fit on one bank so I had everything ready in time.

In terms of mics, the cajon was mic’ed with a Sennheiser e902 in the rear hole to get the thump and a Shure sm57 in front. The cymbal got a Shure KSM44 overhead, although in retrospect I wish I had under-mic’ed it with one of my KSM137’s; it would have gotten the job done just as well and looked better in the ensemble. The electric got an sm57 and Sennheiser e906 on the amp. Everything else on the stage got a DI. One of our acoustic guitar players brought his little Neve Portico box that we used as a DI/Pre for his guitar, and the upright bass player had a Reddi DI we used for his bass. The rest of the DI’s were Radial J48’s. Pretty simple.

I found the mix side of all this to be pretty challenging, though. Personally, I find getting acoustic instruments to sound right when using DI’s to often be a bit of a challenge. Plus, given the style of music, I wanted to use an absolute minimum amount of processing on everything. It wasn’t quite bluegrass, but it was still a style where I knew I wanted to give things room to breathe wherever possible. In the end, I used a lot of stuff on the mix, but it was all in very small amounts. Just a bit of seasoning here and there, if you will.

The sources coming from the stage were all very good to begin with so I there was minimal EQ–maybe 3dB max–on the instruments just to clean them up a little here and there. I also had the high-pass filters set as low as they could go, and I warned the band to hold on to their instruments to keep them from the strings from ringing when not being played.

I used a little bit of channel compression on just about everything. I initially tried to avoid this to stay as pure as possible, but it just helped everything get together. I think if the band hadn’t been on in-ears I wouldn’t have needed any compression, but I think in-ears do something to the way musicians hear dynamics which affects how they respond and play to them. Depending on how someone is hearing things they may play with more or less dynamics which isn’t always consistent with the dynamics of the other players. So when I think about using compression to even something out in a situation like this, I’m trying to get it leveled to match the rest of the band and not just leveled for the sake of leveling it. It’s about trying to get and/or keep everyone on the same dynamic page.

The compression that was used, though, was usually a pretty low ratio–mostly 2:1–with medium to slow attacks in order to preserve the transients of the instruments, and I rarely did more than 3 dB of compression. In the case of the mandolin, I used a Waves Bluey CLA76 with a medium to slow-ish attack and fast release to make the instrument a little more aggressive to bring it a little more forward.

The upright bass got a lot more EQ and compression than everything else, though. I find getting upright’s to actually sound like uprights to be very challenging. It’s difficult to get enough gain before feedback when using a mic on stage, and using a pickup is hard to make sound natural. In this case I used the Waves SSL E-channel to handle all the processing. I used the hi-shelf around 2k bumped up a bunch to bring out the pluck and finger attack on the instrument. Then I used the compressor with the slow attack setting and a medium-ish release to even out the playing. I also patched the upright to a 2nd input and ran it through the Waves GTR plugin using one of the bass amp models. This got feathered up a little bit under the bass to help the mids cut a little more in the mix.

Every input, with the exception of the vocals, also got a Waves NLS channel. I primarily used the Nevo setting to help give everything a bit of analog-ish warmth and depth, and I think this helped keep the upper-mids from taking over too much in the mix.

Per my usual mixing strategy, I split the instruments into groups to manage and process things collectively. The groups were: perc/bass, electric guitar, acoustics, and then a final group for the dobro and mandolin. The acoustic groups all got a Waves Aphex Vintage Aural Exciter inserted with a little bit of the processing dialed into taste. I like the way this can bring out some top and sparkle on things in a different way than simply boosting an EQ. Too much can make things brittle, though, so you have to season lightly.

I also inserted the Waves PS22 on the dobro/mandolin group, and the electric guitar. The PS22 basically works by alternately panning frequencies between left and right. One of the hardest things with this band was achieving a sense of width, depth, and separation in the room while maintaining all the musical information everywhere.

With everything panned to the center and the faders up, it was good but ultimately felt flat sonically. This is one of the tensions we sometimes deal with in live sound, though. I know I’ve talked before about how live sound is often “wide-mono” at best. The problem with mono, though, is it can be a challenge to give the room a sense of envelopment especially in an acoustically treated room using modern line arrays. When you have musicians spread across a stage and it all sounds like it’s just coming from a single loudspeaker, I think there’s a disconnect. So I feel that stereo effects and cheats can actually help things feel more natural in the room. The PS22 was one of those cheats for me this time.

Another thing that helped the width and depth side of things was reverb. All of my groups feed a matrix which in turn feeds a stereo reverb. I started doing this at some point over the last couple of years to help put the band in the same space, and it ended up making things feel a little wider and more spacious in the room. I thought it was especially important this week to help give all the DI’ed instruments more of a natural feel.

My vocal chain stayed pretty close to my normal chain on lead vocals just swapping out MaxxVolume for the Waves CLA2A to handle compression. Again, I wanted to keep things a little more organic and pure so I opted for the smoothness of the CLA2A because MaxxVolume can be a little more aggressive. I also employed the Maag EQ4 plugin on Candi’s vocal to bring out some air with its AIR BAND® and accentuate a little breathiness in her vocal.

I used a couple of Waves Rverbs for vocal verbs combining a chamber and a hall setting. I initially had just the chamber in the mix, which was a preset I stole from John Cooper. It’s become my go-to setting when I want space on a vocal without the sound of reverb which I thought would be appropriate for this style of music. However, it felt like it still needed something more, and I really liked what happened when I mixed my hall preset in. On one of the pre-service tunes we did I swapped my Rverb hall for TL Space with a dark hall impulse I have from a Bricasti which, by the way, I want very badly to have.

One of the challenges for me in these weeks of different musical genre’s is console layout. I’m a big proponent of putting everything in the same place on the desk so playing my instrument is very intuitive, but these different music styles with their completely different instrumentation have thrown me off a bit. One of the things I’m spending a lot of time on is being very deliberate with VCA assignments so I can live primarily on those which isn’t any different from my normal approach. The only difference is the VCA’s are different things for me for these weeks. Essentially, I’m trying to give every musician on stage their own VCA whenever possible and so far that’s working well.

This week was definitely a challenge for me. It went off great and the feedback on it was all very positive, but I never quite got to the satisfaction point I like to get to. There’s sometimes a fine line between raw and polished, and I’m not sure I landed this one where I wanted it. I know there were a lot of little details happening in the playing at times, and I’m not sure I was able to feature them as well as I would have liked. It’s probably just me getting nitpicky, but that’s what I get paid to do. But the show must go on, and now it’s on to week two.