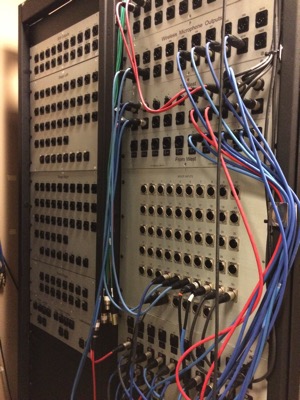 Longtime readers probably noticed I haven’t published as much over the last few months, and I feel like I can finally get into why that is. Our December programming pre-production began consuming a very small part of my brain back in July and has been expanding within ever since. So let me give you a little glimpse into what we’ve been working toward.

Every year, the Christmas Loudness Wars continue to escalate, and that usually puts an ever-growing burden on our music department to come up with engaging musical programming for the weeks leading up to Christmas. This year the music departments at all our campuses decided to join forces so instead of the 5 departments trying to come up with their own individual stuff, they collectively formed a plan to figure it all out together well before December arrived.

The idea settled on was to create a mini-tour of bands for our campuses. At conception, we had 6 stages needing Sunday programming so the music folks put together 6 different bands to tour around to our campus stages for the three weeks leading up to our Christmas celebration on December 20th & 21st. Each week would feature a different genre of music so each band was assembled to perform a specific genre with two bands assigned to each genre. This way each campus would get one of the bands of each genre of music over the course of December. And since the bands would stay the same week to week they would also likely get really good at playing the same music set.

Now, there is nothing particularly hard about this idea on the surface, and I think it’s actually a very good idea from a musical perspective. However, since the way we operate week to week in audio world is based on repeating systems built around a specific type of service and a very similar band every week, whenever we depart from those systems, it’s not always so easy. And this idea is a definite departure from our norm.

Think back to grammar school–maybe not so far back for some of you–and what it was like when a substitute teacher would come in. On the one hand it’s kind of nice to have a change, but on the other hand now you’re working with someone who likely has no idea what your systems are usually like. Sure, a classroom is a classroom in some regard, but every teacher has their own unique way of running the show and when everyone is accustom to it, doing something else isn’t always easy or smooth.

Something I think that gets misunderstood about North Point Ministries is our multi-campus approach. I think when most people think multi-campus, they think one church in multiple locations, but that’s not exactly how we work. There’s definitely a bit of that because throughout most of the year all campuses receive the same message on Sundays. Plus all our campuses are a part of our parent organization, North Point Ministries, so there is common DNA running through all of us. All that said, each campus operates largely autonomously.

We all have a lot of similarities in how we operate, but each campus operates their way. The campuses, in a lot of ways, are like siblings. We’re all cut from the same cloth but still unique with our own families. If you saw us all together, you’d probably put us all together but when you zoom in and look at the details there’s more that’s unique then you initially realize.

So let’s look at how this plays out in terms of audio production. Each campus makes much their own budget, spending, and staffing decisions. For example, Campus A might choose to invest in outboard gear while Campus B prefers to invest in microphones while Campus C focuses primarily on just keeping existing gear working. Some campuses rely on volunteers for all positions. Some use purely contract engineers. Some use a mix of the two. Input lists are different. Capabilities are different. We are different, and yet much the same.

We all love getting together to talk shop, and I think these differences have traditionally been a strength for our organization. They have given our staff exposure to different ideas and approaches that have helped all of us grow as leaders and engineers. I know I have learned a ton over the last 8 years that I owe to our other campus audio guys past and present. However, I think these differences add a challenge within the context of doing a truly multi-campus type of programming like this tour. So what exactly do I mean? Well, let’s look at an example.

Consider monitors. When we start to consider the idea of touring bands, one thing that comes forward in my mind is maintaining a level of consistency for the bands. I knew a couple of these bands would truly push the limits of our monitor infrastructure, so we all knew it would be important to maintain consistency especially for those bands. Part of this is to ensure a consistent, excellent experience for the musicians, but it’s also to keep the stress on our own teams down because if something is pushing our technical capabilities the odd’s are it’s pushing us personally as well. And none of us wanted a scenario where a band showed up at our campus and one of the first things out of a musicians mouth was, “Well, when I was at X campus, THEY were able to give me….”

There’s enough change going on just by moving from one venue to the next so we wanted to make things as consistent as possible for the bands because when a band gets comfortable and used to something they will play better because they stop focusing on the tech and more on the music. If the tech side is going to keep anyone up at night, it should be our crews and not the musicians.

But we all have different ideas and approaches for achieving solutions. In this case, some of us wanted to bring in more in-ears. Some of us were fine with moving some things to wedges. And those are just the personal preferences. There are also logistical non-negotiables that are different at each campus related to things like scheduling and setup time, input abilities, RF availability, whether a stage needs to be completely cleared after the music, etc., etc. etc. It’s different for each of us, but we all wanted to find an approach that could work for all of us.

So there have been a lot of questions going through my mind and the minds of our other audio staffers for the last several months as we tried to figure this all out: Do we give each band their own FOH and/or Monitor engineer(s) to travel with them? If we do, who would that be? Can console show files travel? Well, what about X campus that uses a different desk? What about existing campus needs that are different everywhere? Can only monitor show files travel? Should we have a mic package travel? What about wedges? Does anyone even still have wedges? Can our existing crew still excel working in completely different musical genres than we’re used to? And what about rehearsals? Are the bands willing to rehearse the same sets every week at each campus just for production? If not, how could we make that work? How much will I need to reinvent the wheel to pull it all off? What do we compromise within our normal ways of operating in order to accomplish this idea? And on and on and on.

I started having conversations with our music guys back in July, and I’ve been thinking and working through all of the logistics involved from an audio standpoint since then. Our campus audio guys started loosely conversing about things in August, and in September everyone joined the party. A lot of what we figured out is owed to those other audio guys, and it took several pretty long meetings to get it all figured out. Truthfully, I spend less time prepping conferences than we spent on figuring out December this year. We didn’t always agree, and believe it or not that’s actually a GOOD thing because it’s the friction that refined things. We figured it all out, though, and now we’re making this happen one week at a time. 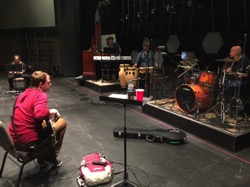 In October the bands began rehearsing at my campus woodshedding things a bit and working out arrangements with rehearsals continuing through November which compressed my own time to finalize my pre-production. Normally this wouldn’t be an issue, but to pull some of this off we didn’t have all the gear in my rooms. So there was a bunch of new gear purchased along with a lot of gear borrowed from our other campuses after running into dead ends trying to rent things. There was also a good amount of time spent wiping console templates and rewiring patch bays to pull off rehearsals in between Sundays.

This last Sunday we kicked things off, and the first week went quite smoothly. I’ll try and be back a few days week with some specifics on the first week for you.