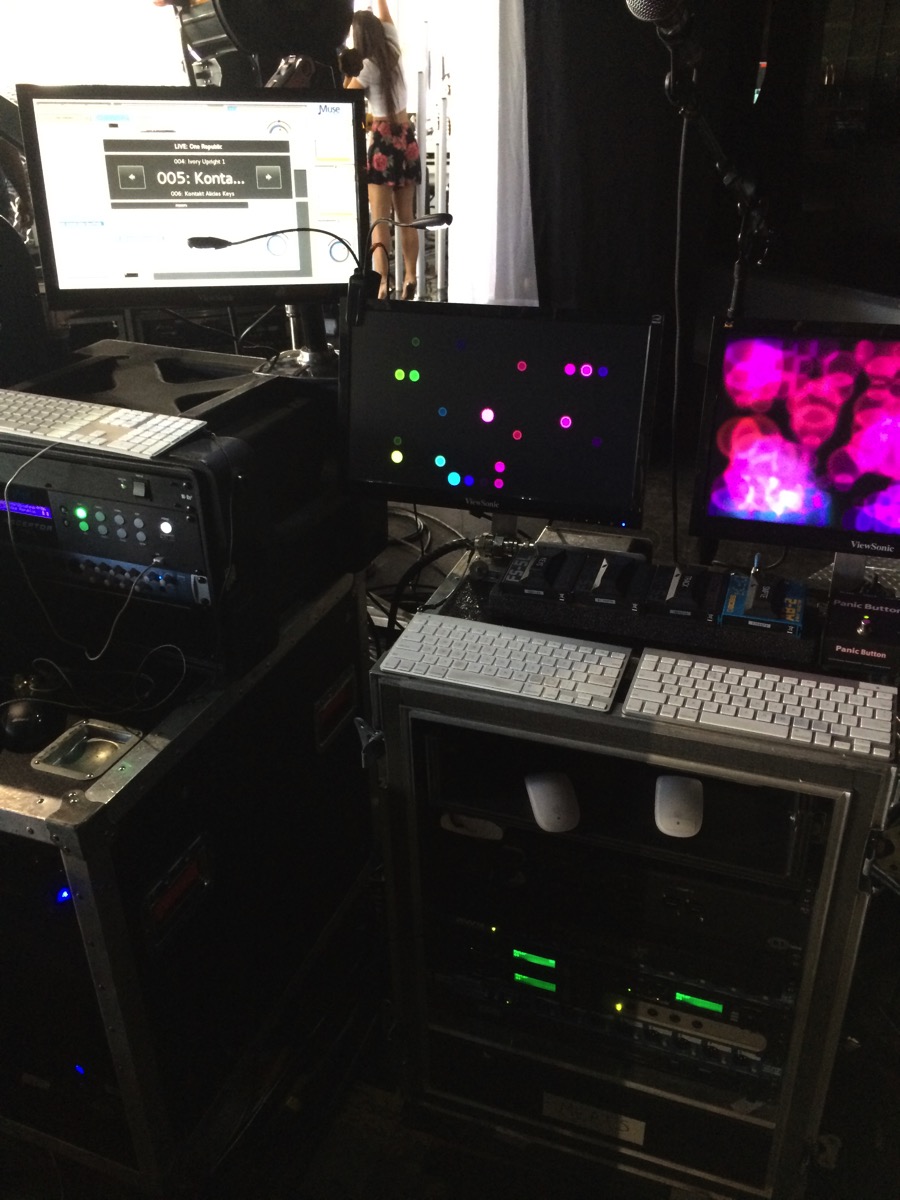 Maybe it’s just me, but I find working with tracks in the context of a live mix to be very challenging at times. It’s been particularly frustrating me lately because when I work with the same material in the comfort of my own studio I rarely have issues. In that context it’s just another instrument, and it’s usually pretty straight forward on where I feel like they should sit in the mix. Adding them to a live mix is a little different, though, so here’s my take on some of the things that can make tracks challenging in a live mix, and then I’ll look at a few ways of overcoming this stuff.

When I’m mixing live sound, I rely heavily on what I can see. I watch the stage as much as I can to see who’s playing, and I can get a good idea of what I should be hearing based on what I’m seeing happening. I think the audience follows this a bit as well, although, it might be a little more subconscious for them.

With tracks, there is no visual cue on the stage as to what’s happening. So with tracks in the mix it can be difficult at times to know what is track and what is live on the stage especially if the tracks are similar to something that could be played live on stage. For example, I’ve been getting a lot of keyboard-esque hooks coming from tracks lately, so out at FOH it can be difficult to know who is playing what: the Memorex or the keyboard player. This leads to #2.

When I’m in the studio, I’m working on one song at a time, and I can make time to go through every input to figure what it is and how it’s contributing to the mix. When I was on church staff and we were doing rehearsals during the week, I had a bit of the same luxury thanks to virtual soundcheck. These days time is often in short supply for me on live gigs.

The gigs I’ve been mixing lately usually involve showing up in the morning for a brief soundcheck and hopefully a run or two at each song, but then we’re in the actual program. I can usually get a basic mix happening in the time I get, but it’s rarely enough time to really understand exactly what is happening in every song even when I’m familiar with the song. This is all complicated by #3.

One minute I might have strings coming down tracks, and a minute later those same tracks might contain auxiliary guitars. Then the next song might feature some kind of synth line. It’s like trying to play a piano where middle C is in a different spot on the keyboard every song. This makes it hard to settle in and get comfortable.

This changing dynamic also makes it difficult to get the tracks to fit with the rest of the mix because they can tonally be all over the place. One song things may be bright, and the next they may be muddy. I’ve even had tracks that change in the middle of a song.

I wonder sometimes where tracks are getting mixed because the balances don’t always translate. It helps to have things broken out as much as possible into individual inputs, but sometimes I find myself working with several stems that were all burned together into a stereo and sometimes even a mono input. Sometimes this isn’t a big deal, but there are also times where key elements are buried in a mix. In live sound, I tend to feature things a little more prominently than in the studio because in a larger venue subtlety doesn’t always translate quite the same way. But when everything including the hook has been burned together, there’s no way to feature that hook. Sometimes I can dig it out a bit with EQ, but in a lot of situations it just is what it is.

While we’re talking about where tracks are mixed, let’s talk about dynamics. Something I’ve written about a bit and often end up talking about when I’m training other engineers is getting things to sit together requires similar performance dynamics. Compared to mainstream/commercial releases, the nature of live sound is often much more dynamic even for those same genre’s. For example, when I am mixing in my studio I am amazed at how much compression I can get away with and even like on some things whereas in a live mixing situation I just wouldn’t go that far for a variety of reasons.

So what can we do about some of these challenges? For starters, a good conversation can go a long way. For example, when I mix FOH at Decatur City Church here in Atlanta, their music director always lets me know what’s coming down on what tracks in each song and how important they are in the grand scheme of things. This goes a long way in cutting down on exploration time and helps me know what is happening musically before my first listen to everything and helps me get a lot closer to the ballpark he envisioned for the song.

For tracks that change a lot, I use snapshots. Even in my run and gun one-off’s I’m doing these days, I’m typically working off a show file I’ve customized quite a bit. Within that file I have snapshots available for each song where the recall scope sets and safe’s are customized. In the case of my track inputs, I always have them set to store and recall EQ settings so as we’re going through rehearsal I can dial a quick EQ on them in each song if necessary. Then once I’m in the show, the only EQ’s that will change with snapshots are on those tracks because everything else is safe’d. Dynamic equalization via the Waves F6 or C6 is also a big help and often the icing on the cake for me.

When it comes to translation and dynamics issues, I don’t feel like I have a good solution. One method I’ve tried is to split the difference and use a little more compression on the live instrumentation, but I’ve had mixed results with this. When possible I try and ask for tracks and stems to be less compressed, but this isn’t usually an option and when it does happen it can also be a mixed bag. Sometimes I actually end up using more compression on the tracks just to get them under control. What usually happens is I end up featuring either the tracks more prominently or the live instrumentation more prominently, but I can’t say I’m always satisfied with this either so here’s a bit of advice for the musicians looking to add tracks to their live performances.

Drum and percussion tracks aside, in my experience, tracks work best when they are more textural than melodic. It’s just easier to fit these types of tracks into the mix because they are often supplementary and not the main event. This also helps when technical issues with playback equipment arise–and in churches these seem to happen quite often–because the song doesn’t completely fall apart. Plus, I think it’s also far better for musician morale when you give them the opportunity to play the cool parts. I’ve heard plenty of grumbling over the years from great players relegated to support the tracks instead of having the track support them. If you have the talent on stage, why not use it?

So I’d love to hear from you. How do you manage using playback tracks in your live mixes? What’s been working for you and what do you struggle with?