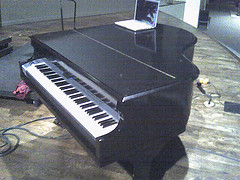 Learning to Play “the Piano” 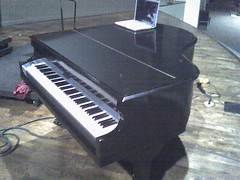 Thanks to everyone who participated in the poll on who mixes FOH at your church; as of this posting the poll is still up if you haven’t participated, yet. It was very cool and encouraging to see that there are so many volunteers out there. In all honesty, something that I have wrestled with is whether FOH should be manned by staff or volunteers. It is a high pressure position with a lot of demands from a lot of different directions, and I get concerned about loading up volunteers wit these things. But no matter how many times the discussion might come up, we always come back to having a strong desire to place volunteers in that position. AND our volunteers are always up for the challenge.

While I have the luxury of having some amazing FOH engineers serving with us, there are still training challenges. The nature of the role of FOH engineer isn’t a paint by numbers position. While there is definitely a measurable/scientific/technical side to it, there is also a subjective artistic side to it. A common phrase that gets thrown around is that the FOH engineer is another member of the band, and I would agree that should be the case.

If the FOH engineer is a member of the band, I would have to say his instrument is the mix itself. I’d like to take this a step further and compare “the Mix” to an instrument almost too common in churches: the piano. Piano keys are sort of static in nature where there is a key for each note that can be played. The piano notes are sort of akin to the controls on a channel strip of a mix console. In both instances, it is fairly easy and uncomplicated to teach someone how to work these. Press a piano key to play a note or move the fader or turn a pot on the mix console to change the sound.

Now, if you know anything about music–and I’m assuming you do if you’re taking a stab at this thing called audio–you know that there is a whole lot more to playing the piano than just pushing a key to make a note sound. There are millions of ways that those keys can be played based on different combinations of keys coupled with the rhythmic and dynamic components of how the keys are played. That dynamic component can’t really be quantified so let’s just call this “feel”. Feel is a very subjective thing, and something that is very difficult to teach. Some might say that feel is a natural kind of thing that you either have or don’t have. If you were to sit in on a children’s piano recital, you would invariably hear different levels of feel as it pertains to playing a piano. When I was playing in bands and auditioning members we would say that they either had or didn’t have “the rock”, but we were really talking about feel. It was an almost inherent, unquantifiable thing we were looking for; some guys got it and most didn’t.

I firmly believe there is also a “feel” component when it comes to playing our instrument, the Mix, and I would say feel plays a part in just about every component of the Mix from shaping tones to blending instruments to working transitions. People with a bit of aptitude can be taught the technical side of our instrument relatively easy. There are a lot of different buttons and slider things on a console, but given a bit of time I can teach someone what each knob/button/slider does just like a piano teacher can teach what each black and white lever and pedal on a piano does. But just like the piano, it’s not a knowledge of what each button, fader, and knob does that makes what comes out of our consoles and PA’s music. In our world it’s the feel of the engineer driving the Mix that makes it sound like music. And just like playing the piano–or any instrument for that matter–there are many different levels of feel that can make the Mix sound like it was played by a master or a brand new student or someone who simply has no business mixing at all.

The reason I’m talking about this is I think the feel side of mixing is largely being ignored while we geek out over the technology. We basically “ooo” and “ahhhh” over a bunch of pianos and maybe go to a class or seminar to talk about what each key does, but there isn’t a lot of talk about how to really play the thing. I can explain all the controls on a compressor and even give some good starting points, but that doesn’t really teach someone how to use it.

But I don’t think this is completely the fault of the available training seminars and workshops, though, because feel isn’t really something that can or should be taught in these environments through a systematic approach. How many 1st chair symphony players do you think received all their training from sitting in a classroom with other violinists? I would venture to guess the answer is a big, fat ZERO.

However, the fact that there seems to be very little talk and even less resources about nurturing feel concerns me. This is a big deal to me especially when related to mixing in churches because it’s feel that makes what we do music and not just a sonic blend of stuff. And it’s the music that the listeners ultimately will connect with on the emotional level. If worship is a heart thing, I think this is what where we want to be.

So let me bring this down from 30,000 feet to my own present reality. My training challenges at FOH largely lie in the feel category. All of our FOH volunteers have feel for the Mix, and with that they all bring their own tastes and feel to the table when they mix. They are also at different levels of refinement in their ability to apply feel to a mix using the tools at hand. My challenge is figuring out a way to take these different feels, help continue to refine them, and give them a certain consistency without completely losing the personality of the engineer. Add to the challenge that unlike a musician who can take his instrument home and practice everyday, our volunteers are largely only practicing every two to three weeks.

This year I have some new things I’m going to try to really take our mixes to a different level which will in turn aid in creating a great environment where folks can meet with God. This post ran a little long which is always the case when I start to rant so I’ll get into specific ideas in the future.

10 Responses to “Learning to Play “the Piano””