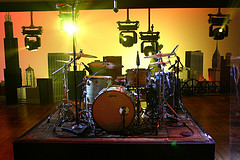 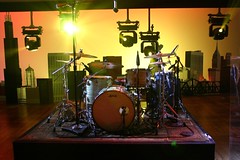 This post is largely in response to Bill’s questions about drum mic’ing in the vocal mic shootout post. Hopefully this can be another discussion starter because there are a lot of varying opinions on how best to handle drums. Here is Bill’s original comment:

Hey, while we’re talking about comparing mics, I’d love to hear your thoughts on drum mics too. North Point, by far, has the best sounding drums I’ve ever heard live. I was wondering what you recommend??? How important is it to have the top AND bottom of a snare miced? And how important is it to have a mic inside the kick drums and one pointed at the sound port? Finally, how about EQ’s and dynamics? Are there any secrets you can share??? Just an idea for a future post when you get time!

Thanks for the kind words on the drum sounds, Bill. First off, good drum sounds start with good sounding drums. Our kits aren’t the best sounding kits in the world, but they’re good, taken care of, and kept in tune and that can make all the difference. On occasion we’ll bring in a different kit such as the one pictured from Drive, but that gets done more because we can than out of need. It also helps that our drummers all bring their own snare drums that tend to be great sounding drums. Then, of course, there is a whole lot of drum sound that comes from a drummer’s hands. An unfortunate small number of folks really understand this, but there is a ton of tone in the way those drums get hit.

Once the kit is in good shape, mic placement on drums is HUGE. Changing the angle on a snare mic a centimeter or two can make a big difference. The center of the drum can give you more attack/crack, but going for something just outside the center can give you more tone. Positioning the mic higher so that it’s aimed more “down” at the drum can give you more crack and tone, but it can also give you more ring. Bringing the mic lower to be almost parallel to the drum head can help with ring and hat bleed and fatten things up a bit, but you can lose some of that crack doing this. Always remember proximity effect from directional mics when you’re mic’ing drums; the closer the mic, the more proximity effect. When we bring a snare mic almost parallel to the drum head, it’s getting closer to the source and bumping that proximity effect which leads to fatter snare, but the position makes it hard to get an angle with the right crack and tone. It’s all about compromise to get the best overall position for what we need, and you need to move the mic around to find what’s best. I don’t get super hung up on this because I have a general idea of where I want to point a mic to start, and if something’s not working I’ll go move it.

Now apply that to all the drums. I started learning how to mic drums when I was a studio intern; my boss would talk to me on a pair of headphones in the studio while I moved a mic as the drummer played until it was in the spot he wanted. It has just been years of playing around that got me to the point where I know when I need to move a mic vs. do something on the channel. Last Wednesday I went up during rehearsal and nudged the snare mic a hair and our drummer gave me a thumbs up from the immediate results he got in his ears. Mic placement on drums is a skill that everyone needs to learn if they want to get good drum sounds.

Going back to Bill’s questions. I don’t think a bottom snare mic is essential. We have one, and I do use it. However, here’s my take on snare drums. I’ve never seen anybody stand under a snare and listen to it in a performance situation. I don’t remember ever seeing a drummer work on how his drums sounded from the bottom; they get the heads in tune, but that’s not where they listen to the final results or spend most of their time. Anytime someone wants to listen to a snare drum, their ears are generally above the drum so I tend to go with that as a reference. All that being said, there can definitely be some advantages to having a mic on the bottom. I like the bottom mic for more detail stuff where I really need to bring out the sound of the snares. I also like having it because I know if the top mic dies, I still have a mic on the snare. BUT the bulk of what I’m going for from a close mic on the snare is the top mic to the degree that there are weeks where I don’t ever use a bottom mic.

Here’s my take on kick drums. Modern rock and roll kick drum sounds can’t be done by the majority of engineers without a mic inside the kick drum. It’s not impossible, but I highly doubt most guys could do it especially in a guerilla mixing situation. I’m not a fan of the one mic in and one mic out either. The outside mic–sometimes seen just outside the port–tends to lack any definition for me and ends up being just a whooooomph instead of a tight kick sound. I like taking that mic and putting it a bit in the hole instead. The kick mic’ing we’re doing is largely adopted from Chris Briley because I loved the way it worked when I came down here. We use 2 mics: Beta 91 and Sennheiser e902. The 91 gets used more for attack and the 902 is thump. 91 is positioned close to the non-beater head, centered in the drum on top of the pillow; too close can seem to get real clicky. 902 goes maybe 1/4 to 1/3 to 1/2 way in aimed at the beater head somewhere between the center and outside of the head; just not too far in is my rule. Remember the positioning with the snare mic now; center gets more of the attack which in this case can be click which we don’t need as much of because the 91 does that so well. Each mic gets EQ’ed to accentuate its strengths, although, I probably lean on the 902 for more of the sound. A nice advantage to the 2 mic situation with those mics EQ’ed for different stuff is we have a quick way to re-EQ the kick drum on the fly for changing stylistically diverse material. Another cool thing with the kick drum is we add weight to the bottom of it–maybe ten to twenty pounds. Buford Jones taught us this, and it can really help with making it punchy. I have a couple of dumbells in one kick and a couple of old mic stand bases in the other on top of the pillows.

As far as EQ. This all really comes down to the drums, but here are sort of general ballpark areas I’ll give our volunteers who are learning how to dial things in. 400 Hz area is the boxiness. 2-5k is attack. 100-200 Hz on the snare can help thicken it up. 80-125 on the kick is more of a “head” thing, the chest thump is much lower like 50 Hz. Again these are ballpark starting points and not where you should just arbitrarily set your EQ.

Dustin Whitt, audio director at Buckhead, taught me a little trick using Smaart to help find frequencies. Turn off all your processing on a drum channel and watch the spectrograph. The area with the most “heat” will probably be the fundamental of the drum. Now you can go after that or more easily find some harmonics.

As for dynamics, be careful. I don’t do much on the individual channels. I might do a whole post on compression one of these days, but here’s just stuff to think about. Slower attack times can fatten things up. Faster attack times can accentuate the transient/crack. I often try and go as slow as possible without losing any detail stuff. I don’t do hard gates right now. I tend to use expanders with a frequency specific key taking things down maybe 6-12 dB when the drums aren’t being played, and I ONLY use them on the toms. Every once in a while I’ll stick one on the kick if it’s feeding back.

Another thing I’ll do with dynamics is something called parallel compression where I basically double-bus my drums(no cymbals) to the master bus and a group that is also routed to the master bus. The group gets compressed a few dB(maybe 3-4 dB) and slid up into the mix to taste. Attack on that comp is as slow as I feel comfortable with and the release is generally more on the mid to fast-ish side, although I go back and forth here depending on mood. This can add punch and help the drums cut without giving the impression that the drums are squashed, BUT if the compressed group overtakes the original drums in the mix you can get into trouble if you’re not careful.

As for any secrets, I don’t have any because I stole everything from other engineers. But here’s one that is different for a lot of live guys. I personally really like using the Rode NT4 as a stereo overhead and relying on it for a lot of the drum sound and not just cymbals. I also am still delaying all my close mics back to the overhead which can be subtle some weeks and huge others; maybe someday I’ll demonstrate the difference this makes. For me, it can really help maintain my snare tone if I push the overheads which I like to do as much as I can. When I mix in our studio on Sundays, I always start my drum mixes with the overheads and the kick.

Here’s some inside information on our ride mic. The ride mic is more for “looks”. It gets used on occasion if there’s something the overheads aren’t picking up, but that mic is really there to have an extra channel available in case we add another tom or snare drum.

One last thing about our drums. I think a big advantage we have for drum sounds is the size of our rooms. Our rooms are big enough that we can/need to drive the drums in the PA up and over what’s coming off the stage. This gives us a lot of control on the drum sound.

I’ll wrap this up with a quick rundown on what mics we’re using right now:

17 Responses to “Just Beat It”