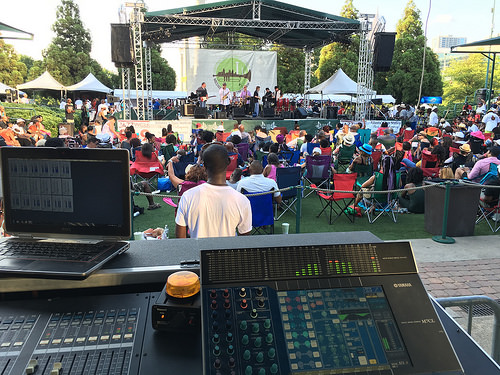 I recently received a good reminder on the dangers of “mixing by number”. In theory, my approach to all things audio is to listen first and make decisions based on what I hear. Of course, it’s easy to fall into patterns especially when you’re always working with the same gear and/or same musicians, and sometimes you don’t realize you’re doing this until its too late.

I was reminded of the dangers of this on a gig mixing FOH for a good friend of mine’s band. The show was a radio station event down in Atlanta’s Centennial Olympic Park on a Wednesday afternoon. I arrived with the band just after lunch for soundcheck and met the crew. As we waited for them to finish their line checks, I walked around the “venue” a bit listening to the PA when the crew would put music into it.

I always carry my Smaart rig with the hope I’m not going to need to pull it out. Music sounded decent in the rig, but when the sound company put pink noise through the system I headed for my Smaart rig to set it up.

The PA was a powered Vertec rig; I’m not familiar with the line so I don’t know the exact model. The music tracks I’d heard through it up to that point hadn’t set off any red flags for me. However, I’ve grown pretty accustomed to what I expect pink noise will sound like, and hearing it through the system instantly informed me the rig was tuned differently from what I’m used to. I wanted Smaart to verify if I was nuts or if what I heard really was different.

With Smaart up and running, I verified my ears weren’t lying, and the rig was definitely dialed in brighter than what I’m used to. I asked the crew if they could warm the PA up a bit for me, and I was politely directed to the system EQ which was being handled by graphic EQ’s directly on the M7CL at FOH.

So, let me stop right here. Yes, this wasn’t ideal. I would have loved a K2 rig with an S6L, but this was what the sound company brought because it fit the budget and show for the day. Based on my first impression of hearing the PA, I wasn’t worried about the rig, and while an M7 isn’t my favorite console, it is a functional desk in many situations. Would I have preferred a parametric EQ in a great driverack box like a Galileo or a Lake that I could just massage a little? Sure, but sometimes you just make it work with what you’ve got, and everything was really close to what I consider “working” before I got there.

So I added a little bit in the 100-250 Hz range and shaved off the top end a bit on the system. It still wasn’t quite where I would have liked it, but time was short as the band was setting up on stage to start soundchecking. I headed to the stage to finalize some mic positions, and then it was back out to FOH.

After a quick labeling of the console, I started running through soundcheck. The console inputs had been completely zeroed which has it’s pro’s and con’s. On the one hand, I wasn’t coming in behind another engineer with his own set of tastes I’d be starting from, but on the other hand I had to dial EVERY input in from scratch on a desk I’m not extensively familiar with. Fortunately, the crew were extremely helpful with all my questions as I tried to remember how to do things like link channels and assign VCA’s.

Yeah, yeah, I know what some of you are thinking, but as far as I’m concerned they’re VCA’s.

Now here’s the point I’m trying to get to with all of this. As I started pushing up inputs, what I heard was different from what I’m used to, but not in a bad way. The normal frequency areas I would gravitate towards EQ’ing on some inputs were not areas that needed adjusting. For example, where I might typically go after reducing low-mid stuff on an input, the upper-mids often needed help instead. I knew this would likely be the case right from the start, though, because I had already listened to the PA and measured it and knew it was different from my normal tastes. It was also different because some of the mics we had to work with were different from my normal go-to’s.

Soundcheck took a little longer than I would have preferred mostly due to my unfamiliarity with the console. In the end, though, I still ended up with a baseline mix in the ballpark of where I would have landed even if I’d had all my favorite gear to play with and the system had been dialed in specifically to my tastes. When showtime hit, it was clear the audience was enjoying the music, and the end of the gig was high fives and handshakes all around.

Picking up the pieces.

The success of the mix that day came from using my ears. I employed some other tools along the way, but my decisions primarily centered on what I heard. I have a lot of techniques and basic assumptions I like to make in my back pocket, but if I can’t adjust in the moment to what I’m hearing I’m not going to be very successful at my job.

So be careful not to get too hung up on doing things a certain way and dialing things in a certain way because musicians change. Equipment changes. Tastes change. Temperature and humidity change. If we really sit around and think about it, there are a ton of variables that can change, and these changes can easily throw our default fancy mixing techniques out the window.

Now, I don’t think it’s ever a bad idea to have a plan. It’s not unusual for me to pre-dial frequency points on inputs, insert compressors, and setup bussing for things like parallel compression ahead of time when I can. However, I’m also not afraid to ditch my plan when what I hear coming out the speakers doesn’t match my expectations because as they say: “A plan never survives first contact with the enemy.”

Audio is not a war and the sounds and talent on stage are not our enemy, but hopefully you see my point. Ultimately I still listen first, and then make my final decisions. 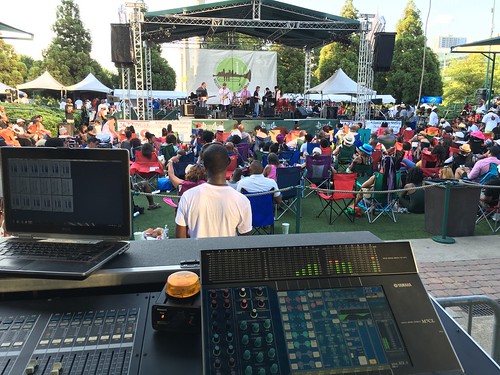