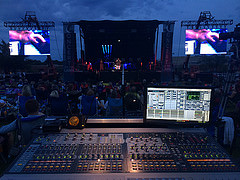 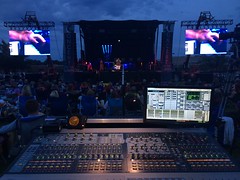 It was a close one, but we put on our Concert on the Lawn a few weeks ago. On the day of the show it rained a bit in the afternoon and for a moment we were getting things ready indoors, but the sky opened up, the sun came out, and we ended up making a bunch of noise out on the lawn that evening.

The week of the show really got started on Tuesday. We spent the day rehearsing probably about 2/3 of the material for the show. I took a few hours off to go home and see my family before heading back to work on the mixes from the afternoon. The band side of the mix came together very fast during the day which I’ve found is typical when we do this type of event. A big reason for this is the players come from our pool of A-level players, and the other big part is since we’re doing cover tunes the arrangements are all predetermined so the band just needs to learn and play their parts well. I did do a few mix tweaks on the band, though, mainly consisting of minor instrument balances and sometimes picking which mic might cut better for a particular guitar solo.

I can’t remember the last time I used less than two mics on a guitar amp, and for this outing I used Shure SM57’s and Sennheiser e906’s; one thing to note with the 906 is I typically flip the presence switch so it attenuates that range, but it’s important to note that switch is not a “roll-off” like you find on some mics. I never used more than one mic at a time, though, and I sort of worked it out so the 57 was a bit brighter and the 906 was a bit darker. So if a guitar was too harsh, I’d use the 906. If it needed to cut better, I’d pick the 57. In the end, I’d say 90% of the show was the 57.

The show featured 9 vocalists with 8 of those singing leads throughout the night so this was where I spent most of my time mixing. Even with slightly less DSP than usual, I knew I wasn’t going to be able to build 8 lead vocal chains with plugins. So my solution was to snapshot the lead vocal chain for each song’s lead vocal. At most I had 5 leads on a given tune so I had 5 versions of my vocal chain available at any given time. Once I got each singer where I wanted them, it was basically data management to propagate their settings forward into each song they were singing on. I hate doing this kind of thing because it’s time consuming and boring, but it’s the best way I’ve found so far to manage this kind of thing and still get the processing I want on each person when they’re standing in the center of the stage.

Another thing I automated was some channel naming. Nothing moved around, so I had all 9 vocals up on the surface at all times. However, I automated each name to change from lower-case to all-caps when it was a lead vocal. Sometimes people give me a hard time for using a lot of lower-case stuff when I name inputs, but this is partly why I do it. With the lead singer’s name changing to all-caps, it was easy to find their input for their songs.

Something else I did a little different for this show was to use two groups for vocals. One group was for lead(s) and the other was for backing vox. Since I didn’t want to or even have enough time to really dial in processing for each individual backing vocal, they typically received only a bit of EQ on their input that was put into place when I got them dialed in as a lead. Then I used the backing vocal group to compress them all together using Waves Ren Vox. This also allowed me to Gate that group quite a bit to help with reducing a lot of stage bleed into the mics since there were quite a few times where I would have 8 backing vocals going on a song. I followed this with a C4 which I mainly like to use to dial down the harshness that sometimes increases when loads of people start singing together. A 10 band parametric EQ followed for dealing with any feedback arising from lots of open mics at one time. The stage was pretty small and I don’t know how I made it work, but somehow I was able to not let the cymbals take over, although, there were some instances of low frequency feedback. Each backing vocal on a particular song was assigned to a VCA which I rode like crazy through a lot of songs to try and keep all of this under control. I’d say the bulk of my virtual soundcheck time was spent getting all this stuff to work right.

Wednesday morning rehearsals resumed and went through the day. After lunch we finished woodshedding the last couple of songs before running the entire show. I then used these tracks on Thursday morning to finish up mixing the new songs from Wednesday morning while doing a few remaining tweaks to the entire thing since a few vocals had been missing on Tuesday. In the afternoon, I headed out to the lawn.

Equipment load-in started on Thursday morning, and the fine crew on-site from Sinewave Audio had the PA making noise just after lunch on Thursday. Ben Gale and his crew had the PA in great shape by the time I got outside, but my Smaart rig still came in handy to check the rig against measurements I had taken inside. We walked around a bunch and listened and measured and listened, and in the end we did very little to the PA. I think there were one or two filters on the PA, and then I EQ’ed my mix a bit using virtual soundcheck, but the tweaks were pretty minor. If you design the rig right and hang it right, you shouldn’t have to do much, and that was the case for us.

A lot of people have been asking me what I thought of the L-Acoustics K2 rig we were using, and I’ll just say this: It was great. Now, I haven’t heard the new generation of line arrays from Meyer Sound, yet, but based on everything I have personally heard and worked with, I’d put K2 at the top of my list. It’s hard for me to explain what it is exactly about this kind of thing, but I guess it’s something to do with the clarity and detail. It was a great PA, and did what I want a PA to do. Now, all that said, K2 did not ruin me for our Meyer Sound MICA’s we have in our two auditoriums. I still dig those, too, and I’m not sad in the least bit to have to mix on them now that I’ve used K2. These are both great PA’s, in my opinion.

Friday morning, the band loaded in before lunch. We had a few technical issues pop up from the rain that came through the night before, but those were worked out by the early afternoon. The band started rehearsing and soundchecking shortly after that until more rain cut that short for a bit. After the rain cleared in the late afternoon, the band rehearsed the full show. I kept the PA off or at a lower level for most of this other than to do a few checks here and there. There are homes and businesses around us, plus there’s no need to kick everyone in the crew all afternoon when we’re going to do it for real a few hours later. People started showing up for the show and marking their spots on the lawn towards the end of the rehearsal so I opened up the PA on to give some of them a treat of what was to come that evening.

The show itself went really well. It was interesting to me how the changing humidity and temperature from the afternoon affected everything so I found myself tweaking the EQ on the left/right during the first few songs of the night. But once that all got dialed in, I was able to settle in and mix the rest of the show. It was a fun week, and I definitely enjoyed the entire experience. I’d love to do it again, but for now it’s nice to focus all of my attention on Sundays.