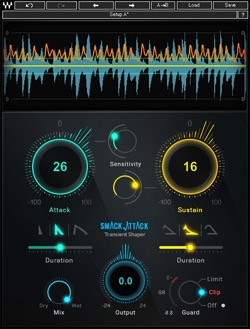 I’m on a bit of a transient kick right now as Waves recently released a new plug-in called Smack Attack. Waves calls it a “transient shaper”. There are variety of other options available these days that do a similar task such as the original SPL Transient Designer, Elysia’s Nvelope, and Sonnox’s Transmod.

Transients are important in music because they draw our ear’s attention and provide definition to things. If you’ve listened to Bruce Swedien talk about music and mixing at all, you probably know he feels transients are essential to music. My friend Kevin Ward also has something he calls the “Attack Principle.” He says that if we can hear the initial “attack” or “transient” of a sound, we will actually perceive it as louder.

For me, transients are important because they give things punch and clarity. They help make things more exciting. In a dense mix, a clear transient will help something cut through and bring it forward in the mix. So how we handle our transients is often an important part in mixing.

A transient shaper or designer gives us the ability to manipulate the the envelope of a sound in order to increase or decrease its transient. For many years, engineers used tools like compressors and expanders in order to accomplish this. Personally, I rely on compressors quite a bit to things like drums more punch this way.

The challenge, though, in using compressors for shaping purposes is they are threshold dependent. This means the strength or volume of a hit will alter the effectiveness. For example, if we dial in a compressor on a snare drum to add punch in the verse, if our drummer ups his energy in the chorus the compressor might dig in too much. The beauty of using a transient shaper is it will typically retain the dynamics of the original performance while reshaping things.

Here’s a real world example of where I might prefer to adjust a transient without using a compressor.

One of the big challenges I’ve found working with non-professional and self-taught drummers is many struggle to consistently play rimshots, and I’m not talking about the fill a drummer plays after the punchline in a joke. A rimshot is a fundamental drumming technique where the drummer strikes the head of the drum and the rim of the drum simultaneously. Rimshots are important in modern music because it is essentially standard practice for drummers to play rimshots on the backbeat (2 & 4) in rock and pop music.

The rimshot adds a level of “crack” and impact to the snare hit. I think in the past I have often misinterpreted drummers who don’t hit rimshots as drummers who don’t play hard enough because a rimshot will often add volume to the snare hit as well. The real issues wasn’t so much about volume, though, as it was about fundamental playing technique. To my ears, rimshots are an essential ingredient to the sound of a snare drum. If you want to find out more about rimshots or explain them to a newer drummer, click HERE to check out a video on them.

When a snare hit is missing a rimshot, it is often a softer sounding hit which is where a transient/shaper may help. A transient shaper may help reshape and accentuate the snap of the drum if a drummer hasn’t quite mastered this technique. I actually put together a quick video demonstrating something along these lines using Smack Attack from Waves. The video is embedded below:

This isn’t going to be a complete fix, of course, because the sound will still be missing the ingredient of that hit on the rim. However, this might help quite a bit in making something work better in the contest of the mix. You can probably use just about any transient processor to help with this, but one of the things I like about Waves’ new offering, Smack Attack, is the ability to alter the shape and duration of the transient. In the video you can hear a bit of how I played with this on the sustain side of things to maintain more of the natural decay of the drum while removing the ambient bleed. You can also hear how I went with the shortest attack envelope to help really make that initial hit pop. That was all after only playing with the plug-in for a couple minutes.

Of course, transient designers/shapers/etc. aren’t just for use on drums. In the past I’ve employed them on arpeggiated keyboard parts. I think I’ve also used them on guitars and even string parts to help bring out the front of the sound a bit. If a sound needs more definition in its transient, a transient shaper might be a great tool for you to bring it out. They aren’t the only tools available for this, and they don’t always work, but when they do they’re one of those things you wonder how you ever mixed without having.