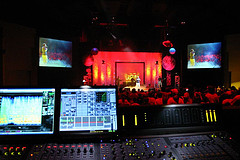 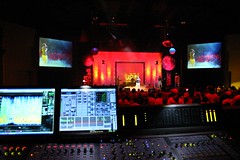 Hot U 2006
Originally uploaded by cccaudio.

This week we are holding a camp for kids called Hot U as in “Hot University”. We have over 700 kids on campus and every morning there is large group programming of a rock and roll nature in our main auditorium .

In fact, every year our KidsWorld ministry puts out a little EP of songs that the kids get on Monday. Then for the rest of the week we beat those songs to death, and the kids LOVE it. This year I had the privilege of co-producing the CD with my buddy Leonard Ahlstrom. I also did a bunch of the recording and editing in my little home studio, and even played a couple guitars on the disc.

For the last two years I was drafted into service playing guitar and singing, but this year I made sure to be behind the board. My reasons are pretty selfish being that they want it loud, and I haven’t had a chance to mix on our system with the limits pulled back. We’re not quite at concert level, but it’s definitely beyond a typical Sunday. It feels very nice and I’m fairly happy with things. It will be interesting to see how we’re going to handle this Sunday’s service because the Hot U band is going to be handling all music duties, and they want to give the congregation an idea of the experience their kids just had. I think we’ll be dialing the volume back a bit for the morning…

You can check out the songs off the Hot U CD over at my buddy Chris’s MySpace page. He wrote all of the songs with Leo.

You’ll notice that one song in particular is titled “1000 Kazoos”. On Wednesday morning all the kids will be given kazoos to participate during the morning and probably on the car ride home as well.