And speaking of headroom….

I’m embedding a video below that is the first of four videos talking all about Loudness and the Loudness Revolution that is happening in broadcast right now. It’s very exciting stuff and goes along the lines of some of the stuff I was talking about in regards to headroom. These videos talk a little more specifically about the European Broadcast standards, but I don’t think they aren’t that far off from the new American(ATSC) standards outlined in ATSC A/85.

Now, you may be wondering why I’m posting this here, and there are a couple reasons. For starters the video piggybacks a bit on some of the headroom stuff I was talking about. But secondly, I think it’s important because I believe the walls between studio, broadcast,and live sound are coming down. This is happening in church world even faster because our resources are often limited, but the scope of our work seems to be expanding often without adding additional equipment or staff. One day we’re just mixing in the room, then we’re doing message CD’s, then there are podcasts, then live webstreams, TV, and on and on and on.

I’m a big advocate of streamlining workflows. It is a win in my book whenever there’s a way to integrate workflows so someone can mix a service on Sunday and have any other media formats require a minimum amount of additional work to output to different media. I think part of the key to getting there will come from information in presentations such as this one. So here’s part 1, but make sure to check out the other parts over on YouTube. I find it to be fascinating stuff. 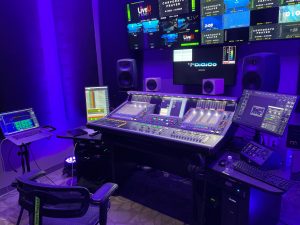