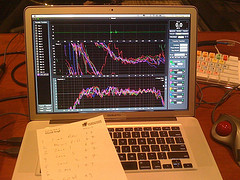 A Quick FFT Tip For the Weekend 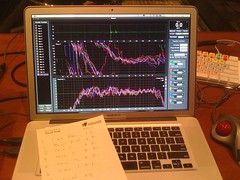 I had the privilege to spend a lot of time with Robert Scovill this week while getting ready for the Avid webinar, and the downtime in between setup and the webinar was filled with a lot of audio geekery talk about almost everything audio we could think of–I apologize for not running a tape recorder the entire time. This quick tip comes out of those many conversations, and I’m sure there will be more in the coming weeks and months.

So this is a cool little thing you can do if you are a Smaart or other FFT user using our handy-dandy transfer function. While Robert and I were discussing system optimization, he mentioned that on the current Petty tour he likes to take a reference trace at Tom’s mic position. Why, you ask? It’s a lobe study. By looking at a reference trace of the PA from the lead singer’s position–or maybe senior pastor in our case–he can get an idea of what kinds of strangeness might be happening behind the PA. That little reference trace can give him some quick insight into where he might have gain before feedback issues during the night.

This week is our first week out on our new stage extension so gain before feedback is definitely something we’ll be watching a little more than we’ve had to. To get a leg up, I took a cue from Robert advice and took a measurement out on the new extension. My measurement trace quickly confirmed an area that was a problem during rehearsal earlier in the week while also revealing a couple other areas to watch. Problem areas appear as non-linearities in the trace; the areas of the trace that have more energy are the places to watch. I made a few notes for Sunday, and then shut the whole thing down. The whole thing only took a couple of minutes, and is something I could even pretty easily repeat on a Sunday morning.

And while I’m on the topic of Scovill, if you’re serious about this audio thing you really owe it to yourself to attend one of his classes like The Complete FOH Engineer course. Robert is a great teacher with a level of humility that is unfortunately rare for a professional with his level of experience and knowledge.

One Response to “A Quick FFT Tip For the Weekend”

TweetShare
If you enjoyed reading this post, please share it!
A Quick FFT Tip For the Weekend