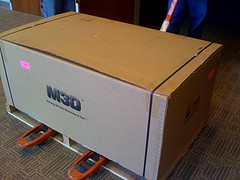 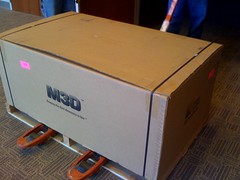 Well, if you follow me or any of our production staff on Twitter, it’s probably no surprise at this point that the new rig is going to be a Meyer Sound rig. I’m going to give you guys a little taste of the elements of the PA as we start putting all the pieces together, and I’ll start with the subs.

Again, this is probably no surprise at this point, but the new subwoofer array consists of Meyer Sound M3D-Subs. Depending on who you talk to, the M3D-Sub was chosen primarily for its cardioid capability, although, there is debate among our audio staffers on whether they actually sound better than the 700HP. Personally, I prefer the 700HP, however, I feel I’m in the minority on that one. Regardless, the M3D-Sub sounds great despite weighing in at just shy of 400 lbs.

, but I’ll give a quick review. The bottom line is we have two auditoriums with their stages backed up against each other. When we array conventional subs in our preferred placement, they put a lot of energy on stage, through the back wall of the stage, on the other auditorium’s stage, and finally into the other auditorium’s listening area. The cardioid configuration of the M3D-Sub greatly reduces the energy on stage and experiments last fall proved that they have little to no effect on the opposite auditorium which is better performance than we’ve been getting.

Our final array will contain 10 M3D-Subs most likely positioned exactly like we had them set for the CD recording last fall. Ideally we would space them on 7′ centers, however, when we played with the configuration last fall we actually preferred the spacing to be a little farther apart to widen the coverage in the room. Ultimately, we hope to sink the subs under the stage which will reduce the spacing even more. The shape of the array will also be maintained retaining the same coverage pattern, but giving us better pattern control across the subs’ bandwidth.

The one last thing I want to reiterate about our subs is that it’s not about power, it’s about pattern. In my experience, bass might be the most complained about aspect of church sound. By arranging our subs in a horizontal array, we get a very uniform and even coverage throughout the listening area providing the audience the same experience while also ensuring that our FOH engineer has a full perspective on what the audience hears. Our current sub placement puts the mix position smack in the middle of a null, and it’s going to be wonderful to finally hear everything from the mix position.

Next up in PA Anatomy, we’ll look at the often forgotten, misunderstood, and underestimated: the front fills.

TweetShare
If you enjoyed reading this post, please share it!
Year of the System 2010: PA Anatomy – Starting Low….