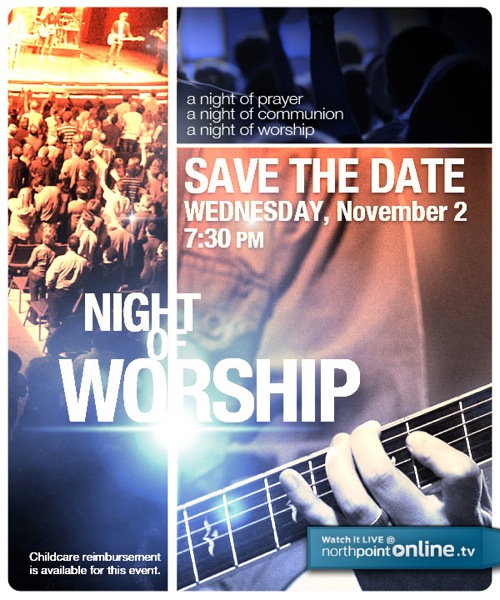 This is a bit of a different week since we’re having a Night of Worship on Wednesday night at 7:30 EDT. A Night of Worship is really just a night of extended music along with prayer and communion that we typically do once a quarter. They usually take place on Thursday nights, but this week is special since we will have a lot of our Strategic Partners in town. So we’re doing it Wednesday night in order that they might attend while they’re in town. I thought I’d take the opportunity to break down my workflow for events like this along with how they tie into getting ready for Sunday since these events are an add-on to our typically weekly responsibilities.

Two days out from the event we try and rehearse for the night. Rehearsal is an all day affair that begins with rehearsing for the upcoming Sunday. We try and keep the band relatively the same for both Sunday and the Night of Worship. Regardless if the bands are the same or different, Sunday gets rehearsed first so that we don’t have to reset for the Night of Worship after rehearsing Sunday.

Since the focus of the night is primarily on the music side, rehearsal typically takes all day. We’ll generally rehearse anywhere from 10-14 songs for the night in addition to the 2-4 we’ll be doing on Sunday. What we rehearse and what actually takes place on the night can fluctuate a bit after our music department gets a feel for what works and what doesn’t. Sometimes it’s as simple as a song moving elsewhere in the set to flow better, but sometimes things get completely cut. I looked at the setlist just before starting on this post, and I noticed that a song had already been moved within one of the sets.

As the band rehearses, I work on getting a rough mix of each song and store it as a snapshot. Once the band has worked out the arrangement and gotten a feel for the songs within a set of music, we’ll put it in the red and multitrack record everything along with a 2-track mix. I may or may not actually use the stored automation during recording since the mixes slowly get refined over the course of rehearsing, however, snapshots still come in very handy at this point because thanks to Avid’s VENUE Link that was added in the last version of the VENUE software, whenever I recall a snapshot while recording, a marker automatically gets dropped in my Pro Tools session. These markers are great because I can use them as auto-locators if I do any mixing in virtual soundcheck later on. Plus they are also a big time saver because as soon as the rehearsal day is over, I need to export MP3’s of the 2-track, and the markers make it extremely easy to locate the start and end of each song so I can split things up into multiple mp3’s. The exported recordings are then used by everyone else involved in the night to prepare for the event. They will also be reviewed by our music department to make sure everything is on track for the night.

I’ll be back tomorrow or later in the week to talk about Day 2.