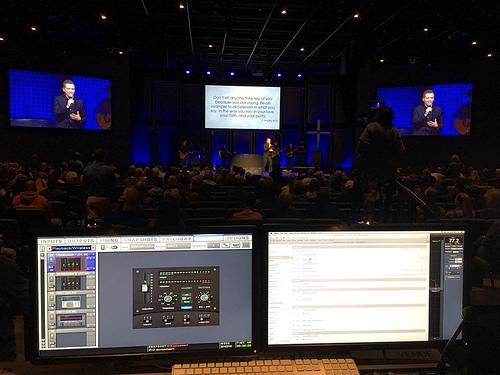 I had an interesting experience last weekend. I was down in Florida mixing FOH for Christ Fellowship’s Stuart campus for the first time. I had spent a few hours the day before doing virtual soundcheck with an older recording which helped me get their show file configured for my workflow along with some of the instruments roughed in a bit. It was also good because it gave me a bit of a feel for the room.

I had a 6:15am call-time on Sunday so I was trying to get in by 6am to make sure everything was set and ready to go for rehearsal that would start around 6:40. I was probably 5 minutes away when I noticed some strange flashes lighting up the sky. It reminded me of an airport beacon behind a line of trees on a foggy night, but there was no airport near me.

As I approached the street I needed to turn down for the church, I could see police lights flashing ahead. When I arrived at my turn, a police car was blocking the street so I turned around to try another route courtesy of my GPS. Ten minutes later I once again found a police car parked and blocking the street, however, this time I could see what the issue was. Flames were raging just up the street on the left side of the road. The church, fortunately, was on the other side up a little bit further.

The officer walked over to my car and informed me there was a nice little bonfire going up ahead. He directed me to follow another car down a backroad leading to the church, so I headed off after the car. After snaking through some very dark roads trying to follow the car, I found myself on the campus. It was hard to recognize it as anything since there were no lights in the parking lot. I could see some electrical panels around the parking lot had red lights flashing almost as if a security alarm had been triggered.

As I got out of my car and headed towards the building, a couple of church staff members informed me a power plant down the road had gone up in flames and several of the transformers had literally exploded. The campus had power, but it was running off the emergency generator. Once inside, I was greeted with the familiar sound of UPS’s running on their backup batteries which I began shutting down.

As musicians and staff began to arrive, there was a question of whether we would have services with the power out. The musicians, however, were pretty determined to do something about the situation. Part of this came from the band’s passion, but part of it simply comes down to the fact of nature that there’s nothing more dangerous than bored musicians.

In this case, the band was eagerly hauling a portable PA and grand piano out from backstage determined to somehow make a service happen. It was a great gesture, however, it was a bit premature since it was very questionable if we would even be able to get occupancy of the building without power. Bear in mind, in addition to safety concerns, no power also means the bathrooms aren’t going to work.

At about 7am we were informed power would probably be restored in about an hour. The musicians quickly struck their makeshift PA and instruments and started setting up their actual instruments for the morning. Then they gathered just off stage and began running the songs sans amplifiers since there wasn’t going to be a lot of time for rehearsal, and they don’t currently have mid-week rehearsals at CF.

Power came back on around 7:45am. I powered up the audio side of things, and we were ready to start at about 8am which gave us 20-30 minutes for soundcheck and a quick run of the songs, one of which had to be sync’ed with a video. Soundcheck and rehearsal was a blur. Before I knew it doors were open, and we were kicking into the first song at 9am. And guess what? Nobody knew what had happened that morning.

Was it the greatest mix I’ve ever done? Nope.

Were all the transitions as smooth and tight as they could’ve been? Nope.

But everything we did that morning was within the range of acceptable to the point that none of the folks in the seats were any wiser to what we had gone through that morning.

So how did I pull it off? How did I mix a band I had never worked with before in a room I had never done an actual event in with barely 30 minutes of soundcheck and rehearsal and still land the mix in a place I was satisfied?

It all came down to my approach, and situations like this where time is limited are a big reason why I developed it because the reality is time is always limited. It doesn’t matter if I’m mixing FOH or doing a project in my studio. At some point, the clock always runs out. However, by using my approach I had prepared as much as I needed to before the band showed up. I was familiar with the songs, and I knew what was coming in the service before we even started. Then I was able to focus the majority of my time on areas in the mix that mattered most.

Having some virtual soundcheck time the day before definitely helped because everything helps when time is in short supply, however, I didn’t carry a lot into Sunday morning from that outside of rough EQ’s on the drums and vocal mics. I had drums, bass, two guitars, keys, several tracks, and five vocalists in the band, and I had to touch every input in some fashion than just pushing the fader up. In the end, it was my approach that made the difference and made it a successful morning.

If you’d like to learn more about my mixing approach, I’ve actually been visiting churches all around the country teaching it in my Priority Mixing workshop. You can find out more by clicking HERE or feel free to Contact Me to find out more information.

So, when’s the last time you had to throw a mix together in a flash? 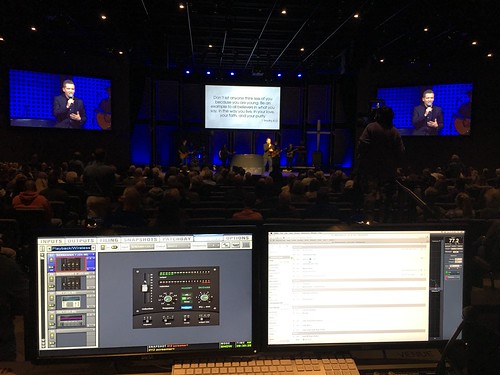