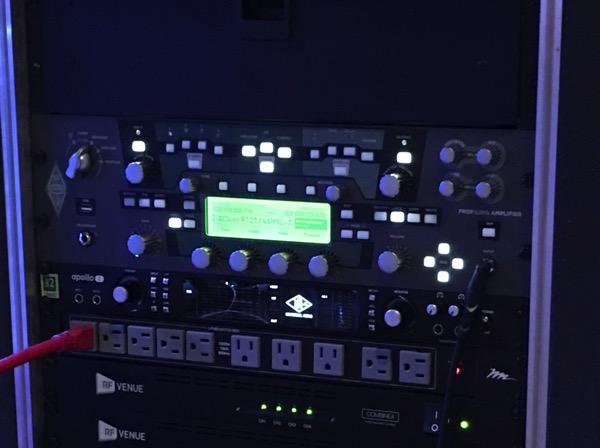 To Amp or Not to Amp

I can’t believe I’m going to say this because it goes against everything I’ve believed for probably 20 years, but here goes:

You may be better off without a guitar amp when performing live in a church.

As I’ve traveled over the last couple of years, one area I find to be quite a mixed bag are guitars. The quality of what I hear is really all over the map, and the size and resources available to a church seem to have no bearing on this. If there’s a consistency I’ve been finding, though, it’s that I hear and have the most success in churches using some form of guitar modeling.

I still run into a lot of amps being used usually in some kind of isolation box, and I wrote about this a little last year. But the more I think about it and the more boxes I encounter, the more I believe they’re the wrong way to go for most churches. Most of the builds I find are about 30-40% of what really needs to be done, and to make an isolation box really work I think you need to build them to about 120% of where they need to be. Incomplete–and even some complete–isolation boxes create acoustical issues due to the reflections inside the box and even outside the box. You can’t overcome these with volume or mic placement, either.

A bigger factor I see might be when these boxes are in use guitar players simply aren’t working on their tones like I’ve seen them work in the past. When I first started using isolation boxes upon joining the staff at North Point 12 years ago, the guitar players on hand were all very intentional about their tones. They often spent a lot of time listening and adjusting settings before settling in for the week. Most of the guitar players I encounter in churches today simply don’t put much time or effort into getting their tone, though. They walk in, put their amp in the box, maybe tweak for a couple of seconds, and expect everything to work. Good tone doesn’t just happen like this, though.

Now, I realize some of these guitar players have been playing in their churches on an almost regular basis so, in theory, their settings shouldn’t need adjusting. My issue, though, is it often sounds like they were never really adjusted in the first place. In order for a guitar player to get a great sound coming out of the amplifier, they need to adjust settings AT the amplifier while they are playing. They need to hear themselves directly out of that amp. Not through in-ears and not while a friend strums their guitar out on stage. They need to plug in at their amp and play and get the sound they’re going for there first.

I think part of the reason many guitarists are skipping this step is the construction and sometimes location of the isolation boxes doesn’t allow a good way for players to adjust their tones. A lot of these boxes simply don’t make it easy for the musicians, and many players consequently give up and settle for tones a lot sooner than they would in other situations. In some ways we can blame the players on this, but I think we are also responsible because we’re often the ones driving the push to get the amps off stage.

So what to do?

I think the good news is the amp modelers I’ve been running into have advanced quite a bit in the last several years and really are a viable option. The majority of what I’ve worked with lately are either Kempers or the Line 6 Helix. I can’t say one of these is better, and a bit of digging on the interweb will give you a lot of different opinions in that regard. What I do know is both of these sound enough like real amps that I have assumed a real amp was in use, and the guitarist put the mic in the right place when he set his amp up before I could go check it.

Neither of these options are a slam dunk, though. They still require someone to actually work at setting things up and dialing in a tone. However, I think that is much easier to achieve in most church settings because these modelers often place all the controls back on stage or at least in close proximity to the musicians.

I firmly believe if we want to get the best sounds and performances from our musicians, we need to make it as easy for them as possible to focus on their own craft. I do not want a guitar player frustrated or giving up and settling because his amplifier is two stories up in a box in a closet somewhere off a catwalk. I can tell you right now that in 99% of cases, nobody is going to go up there and adjust things.

This is an issue because in my own experience guitar amplifiers are not set and forget with one setting for everyone. For example, I remember a friend of mine told me a story of a prominent band he was out on the road with. When the lead singer picked up his lead guitarist’s guitar at a rehearsal, the guitar tech became alarmed at what was coming out of the amp thinking there must be something wrong with it. Moments later when the lead guitarist arrived and began playing through his rig, everyone was relieved it once again sounded fine.

Everything in a guitar’s signal chain affects the final sound from what’s in the player’s head to his hands to the guitar to the pedals to the amp to the microphone and whatever else the mix engineer throws in the chain. You can’t swap out one of these and expect the same results. I wish it worked that way, but it doesn’t. Everything plays and reacts to everything else in that chain.

So my advice this year is to take a look at the guitar modeling amp options available before you build some sort of isolation for guitar amplifiers. There are some scenarios where guitar isolation may still be worth it, but from what I’ve seen lately, I think a lot of churches would probably be happier and get better results by switching to one of the newer modeling options.

2 Responses to “To Amp or Not to Amp”