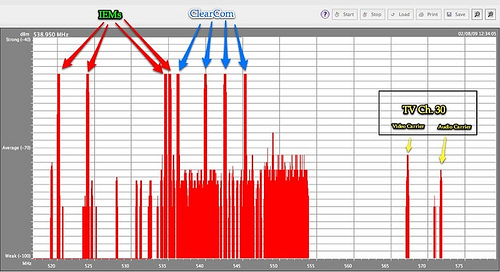 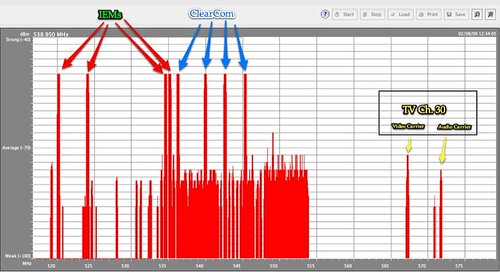 If you haven’t already heard, the House passed a bill last Wednesday to delay the DTV transition to June, and additionally succeeded in ruining what was turning out to be a pretty good day. The bill still needs to go through the White House, but there’s extremely little chance that the President won’t sign it since he’s the one who was pushing for the delay.

Regardless of what happens with the bill, we’ve decided to go forward with our own transition locally. The reality is that this transition has been pushed back several times since 2006, so our RF guru at Shure, Luis Guerra, is advising us to push forward. The photos here are of some scans I did Sunday morning using a couple of our new mic receivers, and you can see there’s a lot of stuff going on. It’s going to be interesting to see how we fit everything into my rooms. There’s still a lot of stuff going on above these bands where the majority of our IEMs and ClearCom sit along with the primary speaker’s microphone. While those frequencies aren’t in the same band, the reality is that they can still interact with the frequencies seen here to form intermods.

I’m still trying to wrap my head around the physics of the whole intermod thing. I guess the simplest explanation is that when RF interacts and mixes, new frequencies are created that can cause interference. These can be calculated, but as you add frequencies the number of calculations you have to do to find them all increases exponentially. That’s why I have the IAS software from Professional Wireless.

On a brighter note, the rest of our environments don’t look like they will be nearly as challenging to implement the new wireless gear. When I was playing with my intermod software, the ClearCom stuff we’re using in my rooms was giving me the most grief so if we can get that to play nice with the mics and IEMs, we should be good. In a worse case scenario, I’m planning on either reinstalling some 700 MHz gear and/or simply losing some of our RF stuff until the analog TV goes away, but my hope is somehow we’ll figure out a way to fit everything in without stepping on anything we shouldn’t.

I’m actually planning to start pulling old gear and installing some new stuff late this week. Thanks to a bit of scheduling madness our rehearsal the week of our scheduled transition got bumped up, and we also added in a Night of Worship with the rehearsal also taking place early in the week. So basically we need to have everything installed before those rehearsals start and running on some temp frequencies until we can do the full campus coordination at the end of the week just in time for the Night of Worship. The next two weeks should be exciting.

One Response to “This Train Ain’t Stoppin’”