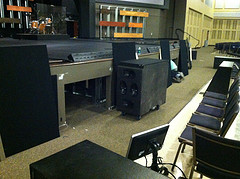 The Weeks Go By 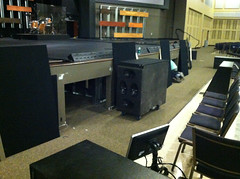 This week looks like the home stretch of what turned out to be a few pretty busy weeks. I thought it had only been four weeks, but when I looked at my calendar I guess this really started a few weeks before Easter when we installed the second monitor console. The weeks have been great, but I’m looking forward to getting back to a point in a couple of weeks where we can get back to small projects and getting ready for Sunday. So here’s a look at our last four weeks in audio world.

Two weeks ago we started a little sub experiment. As I’ve mentioned before, the two auditoriums I oversee share a back wall. There are a lot of conveniences from the setup, but it can also be a challenge especially when it comes to low-end information transferring between the rooms. It’s not really an issue when there is simultaneous programming such as on a Sunday morning. However, when the two rooms are trying to do different types of programming, you can definitely hear what’s happening next door. A couple years ago we installed cardioid subs in our east auditorium with the new PA to help attenuate some of the transfer, but the subs in the west auditorium have remained traditional omnidirectional cabinets so I was asked to bring in some cardioid subs to test what would happen if we converted the west subs to cardioid. 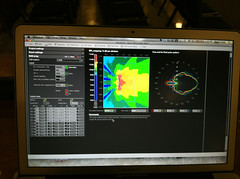 Since the west auditorium stage doesn’t have enough room to build a cardioid array, we brought in 10 d&b J-subs. They aren’t necessarily the direction we’d go but since they are the most readily available cardioid sub to us, they would do fine for the experiment. The subs sounded really good in the room. The J-subs were definitely attenuated in the rear compared to our existing subs, however, at show level there is still a fair amount of transfer between rooms to where you wouldn’t want to have an intimate moment in one room with the rock happening in the other. When we get to the point where we refit that system, I’m sure we’ll do some type of cardioid sub configuration, but to achieve an ideal amount of isolation would most likely involve some major structural modifications.

Last week I had the privilege to attend a new seminar that Meyer Sound is presenting. One of the things we love about Meyer Sound is in addition to making great loudspeakers, they are also deeply committed to educating those in our field. The seminar was taught by Bob McCarthy on Sound System Design & Operation. Bob literally wrote the book on the topic so I jumped at the chance to attend.

It was a quick two days packed with information that I’m still trying to process; I’m sure some of it will be disseminated through here and some events I’m taking part in over the coming months. While the seminar I attended was aimed at advanced system design, I would highly suggest checking out some of Meyer’s seminars no matter where you’re at because they have offerings at every level. And the great thing about their seminars is their instructors are experienced professionals teaching from real world experience and backed by real scientific knowledge. They do a great job of cutting through the myths and getting to what’s really going on and try not to be a sales pitch for their gear. 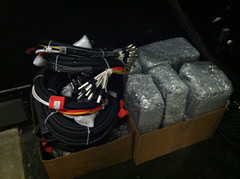 This week we need to pull out the rental subs because our experiment is over; they’ll be coming out first thing on Monday morning. Then we’ll be putting our old subs back in. In addition, our new cable harness is getting installed for the west auditorium.

I can’t wait to see the new harness installed. This is something I’ve been dreaming about for two years since we replaced the harness in the east auditorium. We’re pulling out the original snakes for the system and replacing them with a much simplified and modular system that will gives us more than enough flexibility for our current needs along with room for future expansion if necessary. Changing this out is also going to greatly simplify things for our volunteers so I’m super-excited to see this done. I’ll probably do a post on the whole thing in the coming weeks.

Next week we’re doing another live recording for a CD release–wait, who are we kidding, how many people really buys CD’s anymore? This is the first live recording we’ve done in a couple years. Every week we record for potential future release, but for some reason these recording events are always a bit different. It’ll be a full week of rehearsing right up until the event so somehow I’ll need to fit all my pre-production for it into this week which should be interesting. If you’d like to be a part of the recording, come on out on Thursday, May 3rd, but make sure you get tickets because the event will sell out pretty soon. If you can’t make it, I’d guess the project will most likely be out from EMI some time this fall.

I’ll try and post pictures and updates over the next couple of weeks, but you might not be hearing from me until I get past all of this and have time to reflect.