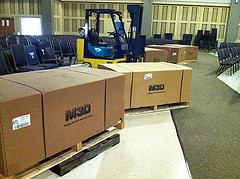 The Physics of Concrete 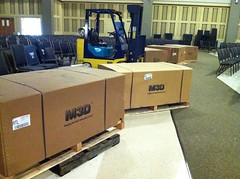 That’s what I’m blaming. The concrete. So here’s what happened.

This week we did a little experiment with our subs. Our subs are good, but in truth I have never been as satisfied with them as I feel like I should be. Playing with the d&b B2’s at last year’s almost-Concert on the Lawn and then the L-Acoustic SB28’s this year hasn’t helped my satisfaction, either. Oh, and then there were the J-Infra’s my buddy Zito had out with OneRepublic this summer. Those were quite nice. Quite. Nice.

Now, I know our Meyer M3D-Subs aren’t any of those, and that’s OK. Our subs are good, and most people would probably question why I’d even consider changing anything. However, it would make me happy if our subs performed a little closer to what I’ve been experiencing with some other boxes. Plus, a couple months ago when we were working on the outfills for the West PA, my friend Ed Crippen made a couple of tweaks to the West sub array that got them much closer to what I’ve been wanting so I’ve been even more motivated as of late to try and move our East subs up a notch. This week we took a shot at it.

I had three primary goals in reconfiguring the subs:

1. Tighten up their performance and punch.

The current horizontal arc of the array works great for even coverage without the fingers of destructive interference from stacks spaced on either side of the stage. However, arc’ing and/or using incremental delay on a horizontal sub array has a tendency to induce time smear in the listening area resulting in decreased punch and impact. Things can be punchy in the near- and mid-field of our sub coverage, but as you transition into the far-field, that punch goes away. And wouldn’t you know it, mix position is right on the edge of that. Moving the mix position 3-4′ forward would be all it would take to get that punch at FOH, but then FOH would be too close. So my hope was to tighten up the overall sub response throughout the coverage area so everybody wins.

We have 10 M3D-subs in the room, but because they’re cardioid they don’t seem to sum quite the same as traditional subs, and on a typical week I mix them right at the edge of excursion. You don’t hear it at mix position, but if you get right down in front they don’t sound so good in excursion. Plus it’s probably not so good for the longevity of the speakers, either. I typically have Meyer’s RMS up on my machine so I can keep an eye on what’s going on with the subs, and I’ll back down my feed to them as necessary. So my next hope was to get the subs to sum a little better giving me a little more headroom in the overall sub performance.

Horizontal arrays are great, but with an array length as long as we’ve got we end up with pattern control as wide as the actual array. It extends out beyond the array simply because of the arc, but that still leaves sections of the room on the far outsides with lesser coverage. In my opinion, they are not good seats, however, the people sitting in them are still important so I would have loved to increase the coverage.

The challenge in reconfiguring the subs is there’s not a lot of real estate to do it. They have to live under the stage, and that area was really designed for the subs to be in bays. So the structure doesn’t offer much flexibility for alternate configurations. There is a narrow path running behind each bay, though, so I measured the space under the stage several months ago when I was originally thinking about this. I plugged those measurements into MAPP so I could play around with some different designs knowing roughly where the speakers could fit.

So let’s look at the models. 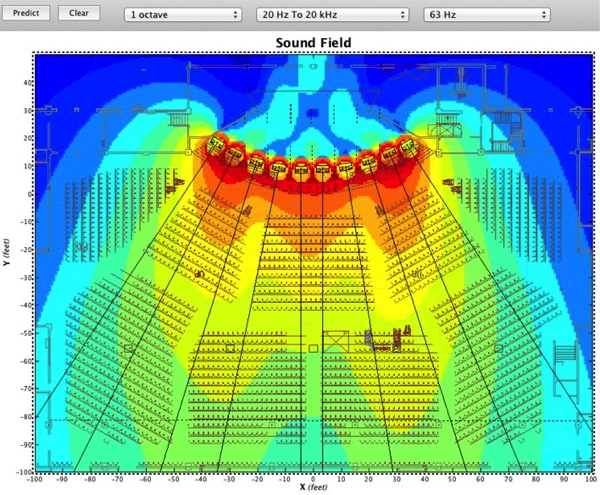 The photo above is our current configuration. Every color change represents 3dB so you can see how the coverage cools off on the outsides. You can also see how the level drops right at mix position just right of the center of the room.

Now here’s what I was envisioning. My idea came from conversations with Steve Bush from Meyer Sound when he was onsite last year helping with the install of the West PA. Since the subs are cardioid, my idea was to tight-pack them and position them so each side of the room would get its own stack of subs. I then aimed each stack so there would be minimal coverage overlap between the two. My thinking was the close proximity of boxes would tighten things up and aiming them this way would keep the coverage smooth on each side of the room. Here’s the model: 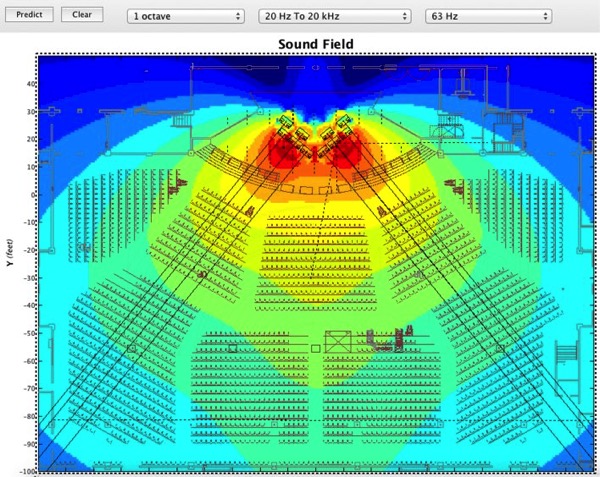 You can see in the proposed idea that the coverage in the room gets wider and more consistent in level. Now let’s check out some Virtual SIM measurements. 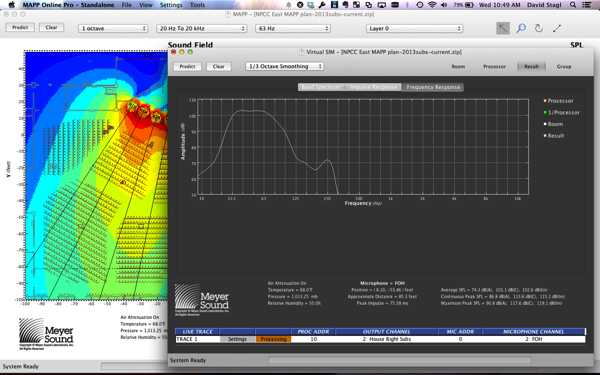 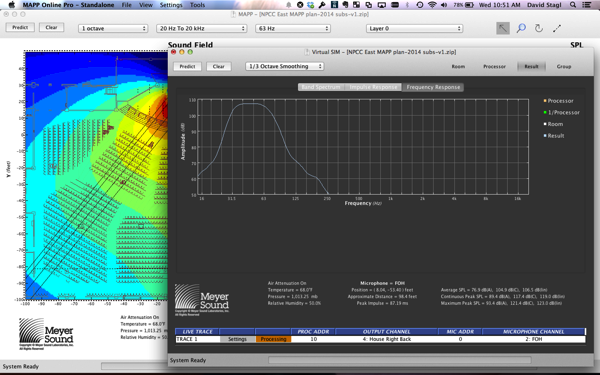 Virtual SIM measurements showed an increase in level relative to our current configuration of about 4dB at FOH, 2.5dB in the front row, the back of the room stayed virtually the same in level, and the front sections on the far sides would get around 6dB more level. I figured this was just the extra little bit of headroom I wanted without blowing away the front of the room to get it.

The model looked interesting to me, so I bounced it off some friends who were also intrigued, but there was still some skepticism. You see, the thing that MAPP isn’t accounting for is that the subs are under a concrete stage. And one thing we know is that when you put cardioid subs under a stage, they don’t quite work the same as if they’re in open air. So I knew the only way we would know for sure was we would need to actually move the subs.

Of course, things didn’t go entirely to plan. The first issue that bit us was somewhere my measurements of the space went off a bit so things didn’t quite fit the way I had hoped they would. We ended up a few degrees off on the aiming of each side, and the back row of subs weren’t able to land exactly where I wanted them. Incidentally, the back row wasn’t an attempt at an end-fired array; that just seemed like the best place I could put the subs. Ideally, I probably would have had those two subs stacked on top of two of the front row boxes, but there’s not enough room under the stage, AND there’s no way any of us would have tried lifting them under there even if there was room.

I came really close to scrapping the whole plan when we couldn’t get the first side in position exactly the way the model was, but I figured I would always be wondering if it worked so we went ahead and moved them all into place. Of course, all hope drained away after I re-timed them to the tops and finally got some music going.

Everything measured quite nicely, but the subs felt worse than before. I tried turning the back row off and flipping polarity but nothing worked. My measurements showed me the same, if not more low frequency level at FOH, but I didn’t hear it. There was no punch and the deep lows I was used to were missing. Some of the guys who helped move the subs were wondering if I was wrong in my initial assessment on the new position. After mixing on this system for 4 years, I knew what it could do, and the new configuration was far from that. I really wanted this to work, but it didn’t.

So on Tuesday we took a couple hours in the afternoon to move things back into the original positions. I was very thankful I had spiked the original locations of the subs because as soon as we got things back up and running it was quite clear that our original setup is the optimal one for now. I’ve still got some other ideas I might explore, but the subs are staying put for the foreseeable future.

Now some might look at this whole escapade as a waste of time, but I don’t see it that way. This was a priceless learning opportunity. I’m still a very strong proponent of computer modeling and using measurements for loudspeaker optimization. However, even if things look good in computer models and measure nice, you still have to put your ears on things. In this case, I liked the model and measurements, but I didn’t like the way it sounded. If we hadn’t actually moved things around and given it a listen, I never would have known how the setup actually worked. Personally, I think the cavity underneath the stage thwarted things because it was a missing variable in the models, so I’d still be curious to hear a setup like this in an open air environment to see if it’s something I should rule out for all-time or not.

There was one other great thing that came out of this, though. Through the course of rewiring our RMS lines to our subs, some of the RMS issues I’d been having from time to time cleared up and some missing boxes that were up in our tops finally showed up in RMS. If you’ve played with RMS at all, you can probably guess how happy that alone made me.

3 Responses to “The Physics of Concrete”