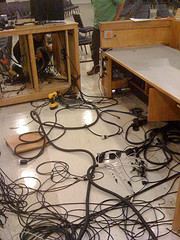 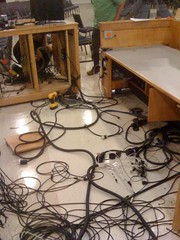 So I’m still sort of in recovery mode from Drive 09. I really had a blast with it this year more so than the last ones, but it took a lot more out of me than I realized so it’s been nice to focus this week pretty much just on recovery. I’m planning on doing a little write-up on some stuff from Drive maybe next week.

Rehearsal this week, however, was great, and I can’t remember the last time I’ve felt as positive about how things are going in our little audio world. It all started right after Drive last week.

On Wednesday after the final session we were all a bit burned, and everyone was just trying to get things put back together for Sunday and Sunday’s music rehearsal that night. Somewhere around 4pm I stepped out for a bit to get a glimpse of daylight and catch my breath a bit from the last couple weeks. When I got back around 4:30’ish, I was honestly a little bored. I found JJ, one of our volunteers who’s been intern’ing for us a bit who also seemed a bit bored. 2 bored audio guys = Danger.

So in my boredom, I figured maybe we could get a jump on the FOH console swap we had planned for the following week. I thought this might be a good time to identify some of the BNC cables for the Venue’s digital snake that had been pulled several years ago for what was then a vaporous future digital console. However, when we started playing with our TD’s fox and the hound to try and identify the cables, I wasn’t having any luck identifying known cables. So after a brief moment of irrationality, I decided that the best way to identify the cables would be to just terminate them and plug them in to the FOH rack. We already had the Venue stage racks in the amp room and rolling the FOH rack out to FOH to plug stuff in didn’t seem like a big deal. The time was 4:45pm which put us about 90 minutes away from a potential drum soundcheck. 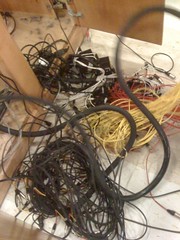 Of course, after I had decided I was going to start terminating cables and plugging them in I remembered that I would need a display monitor at FOH to check if the cables were working and that would require the control surface with the monitor hookup. Well, that was already on a cart so I just had JJ and Luke wheel it out to FOH, too. At this point more wheels started turning, and it was almost like people were starting to egg me on to see if we could get the whole thing up and running in time for rehearsal.

Long story short, by 5:45pm we had audio passing to the PA from the Venue. By 6:15pm I had ProTools hooked up and running. We had the D-Show sitting on a folding table behind our analog console with a mess of cables all over the place. Everything worked great for rehearsal so we went ahead and tore FOH apart after rehearsal which unfortunately took a lot longer to do than getting the new console running. But everything was ready and cleaned up after lunch on Thursday, and things went great on Sunday. 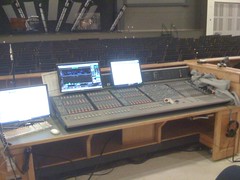 These two Sundays alone have felt like an enormous weight has been lifted off my shoulders now that the Venue is at FOH in both our auditoriums, but please don’t read this wrong. It isn’t so much from the particular console we have chosen–although, I am a shameless fan–as it is simply a matter of using the same equipment in both rooms. It has been liberating for these two weeks to only have to think about one way of doing things as opposed to making the same basic thing happen with two completely different sets of equipment and their own accompanying benefits and limitations. Our now former Soundcraft Series 5 has been in need of repairs for quite some time and was operating without some basic functionality one would expect from a large format live sound console. Now everything works, and we’re consistent in both rooms. It’s an amazing feeling. I guess my big lesson learned from this and the last couple years is that when you are essentially trying to pull off nearly the same show in two places at once, it is a great advantage to have similar equipment whenever possible.

One Response to “The After-Drive”