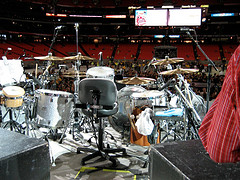 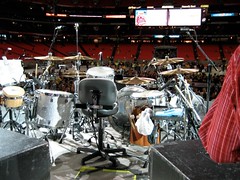 Getting back to the State of the Mix and the drums theme. I’ve said to our guys that if I don’t change or add a mic on the drums every couple of months, I don’t feel like I’m doing my job. With that said, I retired our Rode NT4’s a few months ago and returned to a more traditional, spaced set of overhead mics on the drums. For all intents and purposes the overheads are primarily just mic’s for the cymbals now. I liked the NT4 and other stereo mic setups we tried, but unfortunately it didn’t always work depending on who was playing drums. Depending on the way the kit is arranged and how it was played I wouldn’t necessarily get everything I wanted to get out of the overheads. Maybe the kit would be great, but the cymbals would be lacking. Maybe I’d get plenty of one crash and not enough of another or have a hard time bringing out the ride. Sometimes it was a compromise that wasn’t a big deal, but over time it started to bug me a bit.

I think this probably really started earlier this year or late last year when someone made a comment to me about our style of mixes being more of a CD-esque/studio type thing. I hadn’t really thought much about it at the time, but it got me thinking about those first concerts I went to back in high school and how what I saw on stage sounded in the room. Part of the the experiece was more an emotional, vibey thing that happened. There was just some sort of connection that’s very hard to describe when I would watch this seemingly small drummer down on a big stage in a shed somewhere hit the drums and this huge sound would come out. Even in the smaller theatres and clubs there was still this visceral connection between the way the band appeared and sounded at those memorable shows.

Up until the last century or so, I think music was really a sight and sound type of thing. I think we often tend to forget that in the grand scheme of things the recording industry is pretty spanking new at only about 120 years old. Experiencing music prior to that meant you had to be in the same space as the musicians. So for thousands of years there was always a way for a listener to make a visual and sonic connection between the performer and the music. MTV maybe got a rap in the early days for changing music, but sometimes I wonder if maybe early MTV didn’t put things back on track to the way most generations in history have experienced music: as a sonic and visual thing. Maybe MTV just brought it into the context of a modern culture that was growing more and more media driven.

Getting back to the issue at hand, I think something that’s been more important to me lately is really trying to reinforce that connection between what’s seen on stage and the sound that is heard. It’s not something we weren’t always trying to do, but I think I have a bit of a more conscious focus on it right now. I’m not necessarily going for the same type of sight/sound connection I experienced at those first concerts because that’s not really the nature of what we do. We might go big for some things, but it’s a different big that works in the context of who we are and what we’re doing.

I also don’t think our players play in a fashion to try and draw attention to themselves so I think there’s some leeway in matching the stage visual with the listening experience. Plus in modern music I think sometimes you can fudge it a bit with some instruments because sometimes guitars might sound more like keyboards and keyboards might sound more like horns or strings or maybe even horns & strings in a blender with a hamster. But the one place where I think you can’t really fake things is with drums due in large part to the physicality involved in playing them and the transient nature of the sound.

When someone hits a cymbal or a tom, I want to hear it. In fact, maybe I NEED to hear it. When the guy brings his arm down on an object, there is an expectation we’re going to hear something. The gig is sound reinforcement, and the way I see it is we’re reinforcing the sounds the guys on stage are making in order to connect with the folks out in the room. When those sounds don’t match the sight, I think it can be a disconnect for a listener no matter how good the two might be on their own. That doesn’t mean that cymbals and drums should rip everyone’s head off, though. Things still need to sit in the mix in context, but I believe they need to be in the mix.

All that to say, I think the NT4 was at times inhibiting my ability as a mixer to bring out some of the sonics of the kit when played by some players. The NT4 could do some great things for some guys, but it just wasn’t as flexible week-to-week as I think I want right now. So a few months ago I went back to traditional, spaced overheads with the primary goal of capturing cymbals in lieu of trying to get a kit sound. Ultimately cymbals aren’t very high on my mixing priority list, and the spaced overheads seems to be a much more flexible approach right now with the style of music we tend to do on Sunday mornings. I feel like even if I just ballpark the mic placement or if something gets bumped during a transition, I can still get very useable results on every drummer who plays on our stage which makes the approach low maintenance so we can focus on important things like vocals and lead instruments.

I did briefly toy with leaving the NT4 up in addition to the new overheads because I know there will be some things we do at times where having that stereo overhead available will be great. Sometimes we’ll do more of an open, acoustic-type thing and I still like getting more of a kit sound from a single stereo overhead for that type of thing. The single stereo overhead can also be great if a drummer is playing a shaker. But those things happen a few times a year, and it’s not a big deal to pull a mic out for a week to do a one-off type thing.