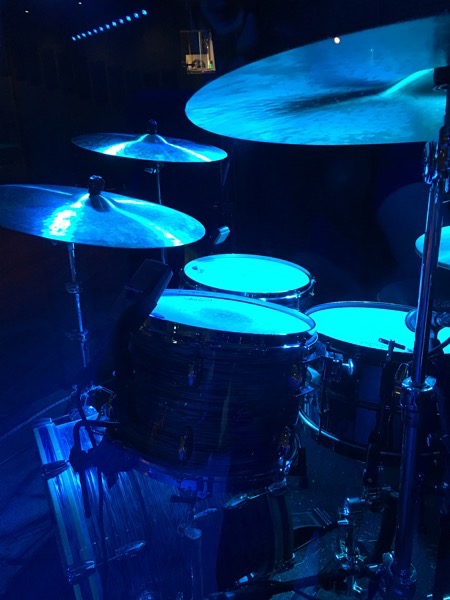 Shields, Fish Bowls, and Other Things

Shielding drums is a topic that comes up quite a bit. I’ve heard every argument for and against them, and I’ve probably made every argument for and against them at some point. So that’s not what I want to talk about today. Audio in a live environment is always a series of compromises, and using a drum shield or “fish bowl” is one compromise that gets chosen. There are other things you can do, though, that can sometimes help more than a shield.

The obvious thing everyone always says is to talk with the drummer and have him play for the room yaddah yaddah yaddah. You probably should talk to the drummer, but more just because drummer’s are actually cool people and the way your drummer is playing isn’t always the issue. Achieving the right drum tone for the style of music you’re doing has a lot to do with how the drums are played. For example, rock drums need to be hit relatively hard to get the right tone. The proper amount of intensity is going to vary from drum to drum, but pulling back too far to play for the room can affect the emotional impact of the drums within the music which will hurt the vibe just as much as placing the drums behind plexi.

The big variables in drums that nobody seems to talk about, though, are the acoustics of the actual stage and where the drums are placed on that stage. These have a major impact on how the drums will sound, and here’s a repost of a video that illustrates this.

For some time I’ve been seeing a big push for certain aesthetics on stage that force drums into specific locations. I get it. The way the stage looks matters, however, nobody comes up after the service and complains that the drums were stage right instead upstage center or that you had LED strips instead of a curtain or whatever other scenic thing you can think of. People DO come up and complain if the drums are making their teeth hurt in the front row, though, so maybe this is something that should take precedence.

When it comes to your drums on stage, the first thing you should look at is what is behind and above your drums. How far away are they from a hard surface? What is that surface made of? Drywall? Curtain? LED Wall? Glass? If your drums are 5′ away from drywall and you throw a shield up in front of the drums, the sound from the drums is just going to hit that drywall and then most likely reflect back out into the room.

Those reflections aren’t cut and dry, though. On the one hand you’ll probably get nasty cymbal energy, but that wall can also hurt the tone of your drum as well. For example, if we have a wall 5′ away, our sound will hit the wall about 5ms later and reflect back to the drums about 5ms after that. So we get a 10ms delayed sound arriving at the drums, and when that delayed reflection combines with the acoustic sound of the drum we will encounter phase cancellation. In this case it would be a big null right around 50-60Hz. So how do you think a kick drum 5′ away from a flat wall is going to sound? Probably not so hot considering the fundamental of the drum likely going to be in that range.

So how do you deal with this?

Well, you can start by seeing if there’s a better spot on stage. Take a floor tom around to different areas of the stage and play it a bit in those areas. When you find a spot where the drum seems to have more tone and sing, mark that area. You might also want to mark areas where things sound decent, OK, and really bad because if the only place on stage where the drums sound good also happens to be where your pastor stands, you’re probably not going to be able to put the drums there. Once you have the stage “mapped”, try and find a spot that works for the drums acoustically as well as aesthetically for the rest of the team and set the kit there. You may not be able to put the drums in the perfect spot, but as I mentioned, audio in a live environment is a series of compromises.

Regardless of whether you can get your drums in the right spot on the stage for their tone, you may still have reflection issues related to the high frequency content of your cymbals. The best way to deal with that is through absorption. Thick, heavy curtains on hard surfaces can help with this, but you can also do acoustic treatment. Most absorbent acoustic treatment is just rigid fiberglass wrapped in an acoustically transparent fabric which you can build yourself, and you can find tutorials on YouTube on constructing these. 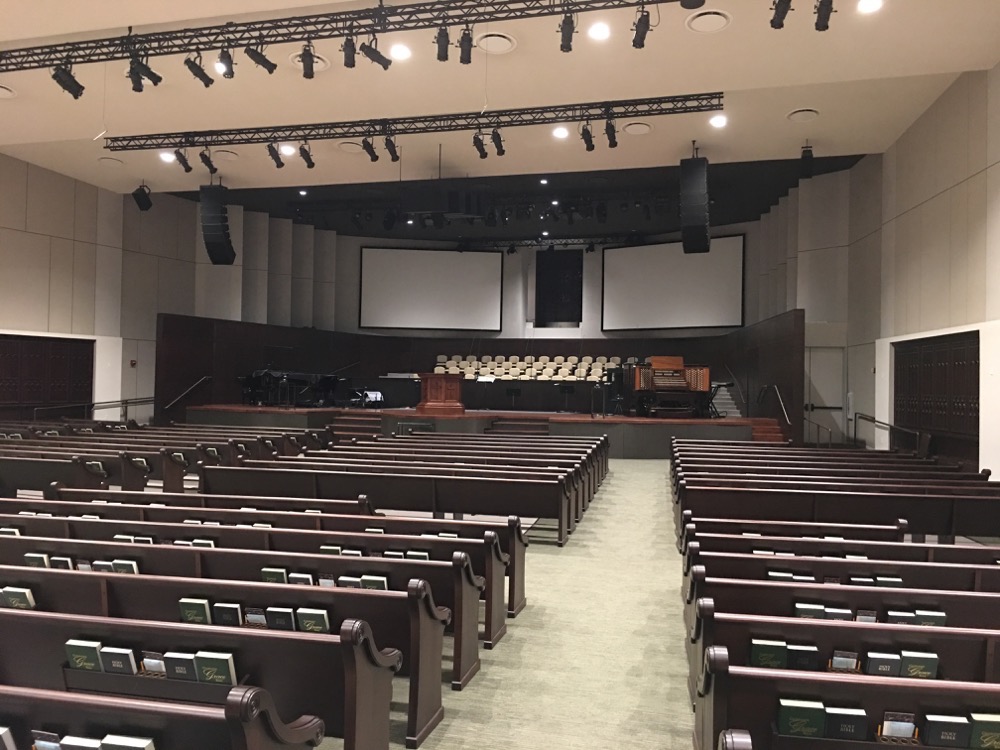 An even better solution, though, would be to talk to someone like my friend Kevin Hughes. Kevin is an acoustic engineer who has created some innovative solutions for tackling acoustic challenges. I’m not easily impressed at this stage of my career, but the work he does impresses me every time I hear it. Kevin’s approach is much more holistic, and in essence what he can do is tune a stage–and a room for that matter–for its particular challenges and quirks. It’s the kind of thing that seems like mad science at first, but there’s nothing crazy about it at all. Kevin just knows his stuff and has some innovative ways of doing things. For example, the photo here is one of the rooms he designed the acoustics for, and while it may appear that the wood paneling on the upstage wall would be reflective, it is not. That stage along with the room has been fine-tuned in ways I didn’t understand were even possible.

When your stage is treated properly, the advantage is you can get more coherent sound coming from your stage into the house. This gives the sound in the house a more natural and higher quality, and it can also help connect the stage to the house as well. Think of it this way: an untreated stage is like someone standing in a room surrounded by mirrors of varying sizes and shapes and angles. It’s like those sequences at the end of the action movie where the bad guy is in the room of mirrors and the hero is trying to find him. He can kind of make out that he’s there, but the visual runs the gamut from weird kaleidoscopic reflections to a disorienting mess.

Treating your stage is like removing the mirrors. Now you can see clearly what is happening on the stage. You’ll also get better sound in your mic’s on stage, and what’s coming out of your PA will be improved by this as well. Depending on your context, even a treated stage might still need some shielding for the drums, but if you have to go that route it will likely be more effective than simply throwing up a shield or investing in a large enclosure.