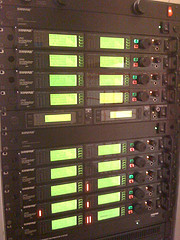 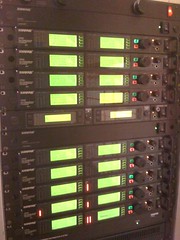 Today was day 1 of our big campus RF transition, and I think it went pretty smoothly. I think that was largely due to all the hard work from our associate Audio Director Luke Roetman and faithful intern JJ. A lot of pre-planning and organizing on my part didn’t hurt either.

I’ve been preparing for this for a while now. For the last couple weeks I’ve been running frequency coordination simulations whenever I’ve had a bit of free time which gave us a good starting point today with a rough coordination in hand. I also pre-programmed all the receivers a couple weeks ago so they had their proper IP addresses and device ID’s so we could plug them right into our network for final configuration once installed.

I went ahead last week and pulled all of the old gear that we weren’t going to need for Sunday since this week’s schedule was filling up with rehearsals moving all over the place. That was a big help today since we had about half the new wireless receivers already in place. The new stuff was all in by just after 2pm, and I moved on to programming their frequencies while Luke and JJ worked on organizing transmitters and starting to get ready for the evening rehearsal.

With everything programmed and in place we did a bit of War Gaming in our east auditorium to make sure we could get through rehearsal tonight. The War Game process is pretty simple and done to make sure that none of our units are causing interference on frequencies in use. We put all our mics on stage and turned them all on along with any other transmitters we needed for rehearsal. Then we turned each transmitter(mic’s and IEMs) off one at a time to see if any other units were causing any intermods on the that transmitter’s frequency. If it was clean, we turned the transmitter back on and moved to the next one. If there was interference we tried to find a new frequency for it and started the process again. We had one potential problem with one of our IEMs with no spare frequencies available right now. We were able to power through it this evening, but it will definitely have to get fixed by the end of the week. We’ll probably war game a bit more in the west auditorium on Wednesday before we have rehearsal that evening.

Tuesday is a day full of rehearsals for us so we won’t be doing much with RF unless the stuff we did on Monday needs tweaking. If there’s some downtime during rehearsal I’m going to program a few more things and look at some more frequency stuff. We do have one more mic I forgot to throw in the mix this afternoon when we were testing everything so we’ll have to get that working first thing in the morning. The goal of today was to get everything to where we could focus on rehearsal Tuesday, and after Monday night’s rehearsal I think that should be the case.