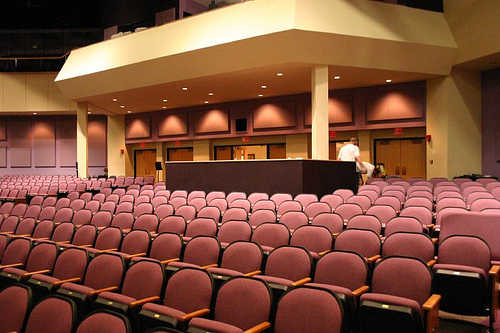 If you’re putting together a new building or remodeling, here’s something to think about:

Audio engineers often need to leave FOH during soundchecks and rehearsals to adjust things on stage and/or to just walk the room to listen. Ideally, they should have easy access to and from any FOH booth/location you have. At the same time, however, they shouldn’t be positioned so there is a high amount of traffic going past them because the noise can be distracting.

Comparatively, lighting and video crews rarely get up and move around so they don’t need instant access to the entrance/door.

Keep this in mind when you’re planning your FOH setup.

If it was me putting together my ideal FOH setup, it would be tiered much in the way I see many arena shows setup. First, FOH would be centered in the room. Then Audio goes on the bottom level which should be the same as the audience level so they can experience what the audience hears. Lighting would be elevated behind audio to see over their head(s). Then video is behind lighting. If cameras are in use, they go between lighting and any other video equipment.

Producers and/or other production staff can live on the lighting or video tier because they typically talk a lot and noise is a distraction for audio. Lighting techs often wear headsets so the noise impact on them won’t be as great plus there aren’t typically large lighting crews at FOH in churches. If there are a lot of additional producers/production staff, an additional tier in front of or behind lighting might also be an option.

This way all crews can be in their ideal, centered, position in the room while remaining out of the way of the other crews. Plus, with the growing number of installs utilizing stadium style seating behind FOH, this should be fairly easy to integrate into that setup. Personally, I think a narrower footprint from production in these setups will also be less distracting than the typical wide footprints I see in most churches.

“But I get cues from producers? How will I get them if they’re not next to me?”

You could place a simple rearview mirror at audio for needed “eye contact” with a rear level for cues or counts. Alternatively, a shout speaker could be employed. These days, there are probably even options for employing a visual countdown on a monitor as well. Be creative. Just keep in mind that in my experience getting counts and cues is way down on my priority list from being able to hear, see, and access the stage in the best way possible.

One last thing to consider is to make sure and leave enough room at each position for someone to be training or to have an assistant or even both. 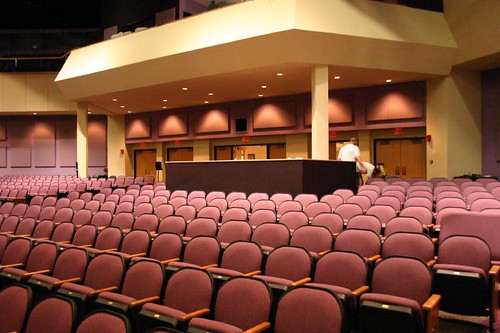