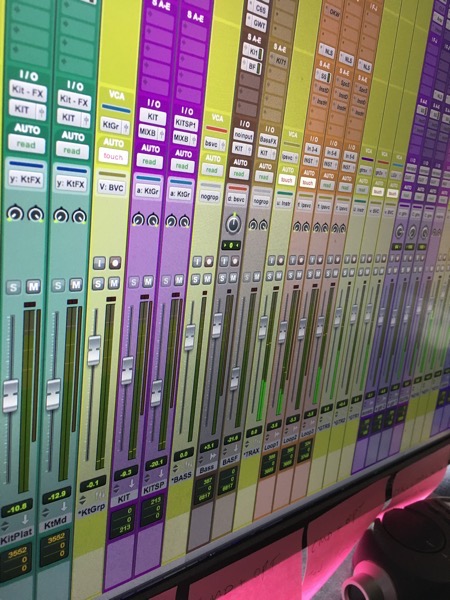 I’ve mixed a lot of live recordings lately, and I have a quick tip if you’re recording at FOH or, at least, using a FOH type setup for recording.

Number your tracks in your DAW BEFORE you start recording.

It’s always good practice to name tracks in simple descriptive terms, but I think the first part of every name should be a number. When possible that number should refer to your input patch as well, but numbers on their own are incredibly helpful.

Why is this a big deal?

Numbering your tracks with at least two digits–three if you’re going over 100 inputs–embeds that number in your audio files. To my knowledge, every DAW names recorded files based on the DAW’s track names. Putting a number in that name does two wonderful things.

For starters, it keeps things organized.

Computer operating systems sort alpha-numerically. If your file name only has a name such as “guitar” or “snare”, those files will be sorted by name amongst everything that’s been recorded. Good luck sorting out your drum kit files later when they are all over the place in a computer folder. If you named your vocal tracks with the vocalists’ names, that will be another fun one for you to find when you can’t remember exactly who was singing later on.

Most engineers keep their input lists organized to some extent by instrument type–if you’re not doing this, you should, by the way. If you put numbers in front of the name in your DAW to match your inputs, your files will sort in order and keep things together. Opening the audio files folder will be just like looking at an input list.

The other reason numbers rock is they give you a reference for later on. Most of the churches I work with are using templates for their DAW’s at FOH. So every week they just make a new session based off that template which has all the tracks in there named roughly the way they are typically assigned. Things often change from week to week, though, and sometimes instruments end up in different places on different tracks.

For example, I received a session recently where a file labeled “choir” was actually the “bass guitar” and a “percussion” track was actually an “electric guitar”. If those files had been numbered, and I’d had a copy of the input list, it would be have been easier to figure out sooner why I couldn’t find a file called “bass”.

Even if you’re not sending stuff out to someone else for mixing, you’ll appreciate this yourself when you have to pull something up a couple weeks after the fact and can’t figure out why things don’t seem to be what their names say they are. I can think of several times where a music director asked me three weeks later if I could send him “x” instrument from a service since that person wouldn’t be able to make it to Sunday, and he needed an instant backing track.

Have any tips or things you’ve learned the hard way while recording? Please leave a comment and tell me about it.

TweetShare
If you enjoyed reading this post, please share it!
Quick Live Recording Tip – Numbers are Your Friends