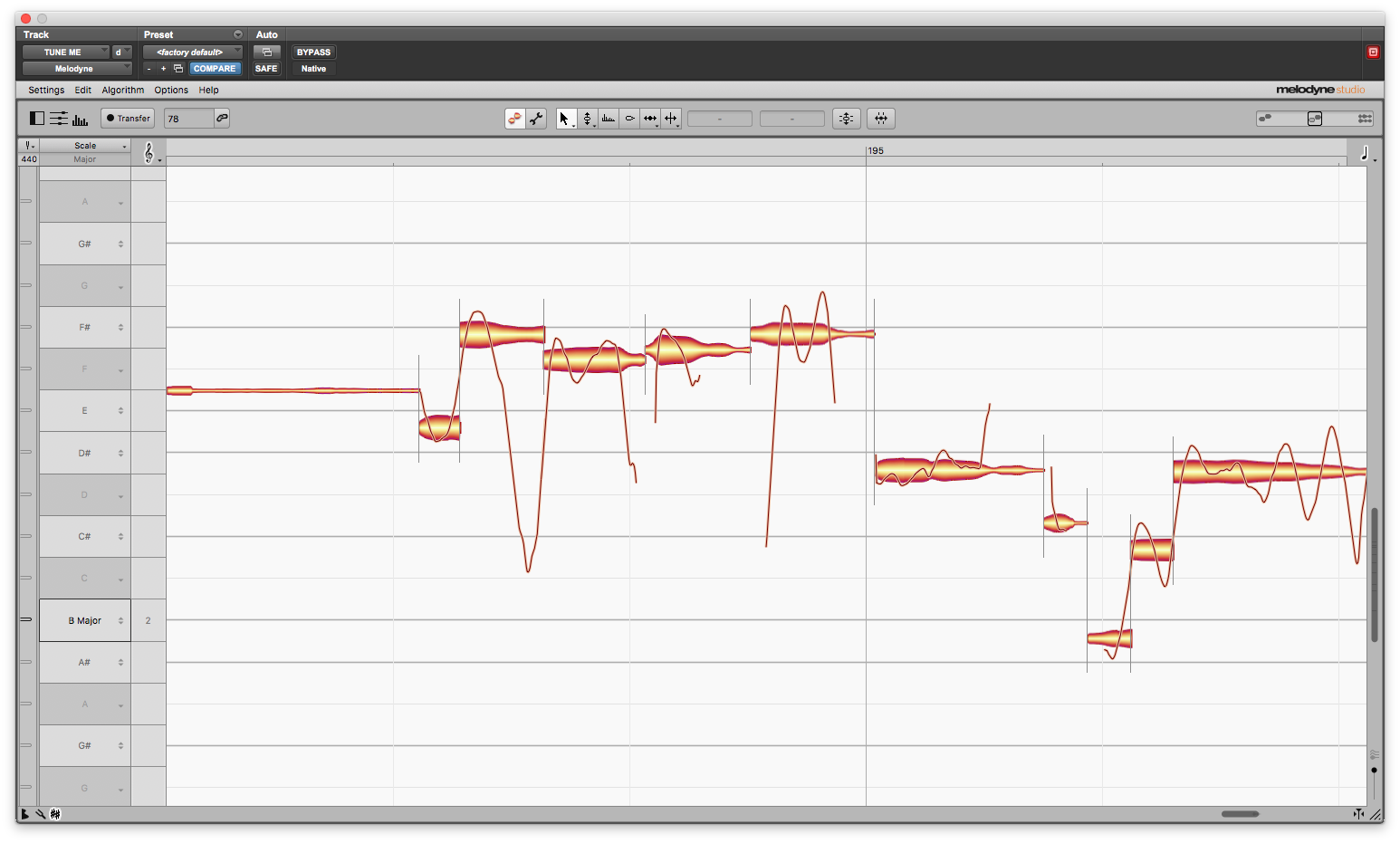 Pitch in the Stream

When it comes to improving the quality of a livestream, a big consideration is often the performance. One place where this sometimes falls apart is vocal pitch. Broadcast audio rarely leaves anywhere to hide, and pitchy vocals are often much more apparent online when they seemed fine in the room. Dealing with vocal pitch has become very common for me lately as I’ve been doing more and more studio work so let’s look at what’s going on in with pitch and our vocalists in the live realm and how we might be able to deal with this.

The photo below is a screen capture from Melodyne which is a popular piece of software for tuning vocals in the studio.

What we are looking at are a couple of phrases from a live vocal that was recorded in a Sunday service. I would categorize this particular vocal in the average range so we’re not looking at someone who is particularly good or bad.

On the far left of the screen you can see the different notes with the notes outside of the scale of this song in darker grey. I have also turned on a center-line for each note, and these extend from left-to-right across the screen so you can more easily see how far away what was sung is from the legal note.

The red/orange line here represents the actual performed pitch of the vocal over time. The blobs you see underneath that line represent Melodyne’s calculated average for the pitch that was sung. So if our vocal here was being sung tightly in tune, in theory, we would see those blobs centered over the center-line for each note. That’s not what we see, though, is it?

Take a look at the first three notes/blobs. Looking at the pitch line, the vocal comes in on what was probably supposed to be a D#, but it’s a bit sharp. Next it goes up to the F#, and while the blob here looks flat, based on the actual pitch line it’s just a little sharp on the note. The next blob is probably more than one note or vibrato, but either way it’s still not exactly hitting close to the key of our song.

This vocal could probably use a little help, so let’s look at what happens if I run it through Waves’ Real-Time Tune plug-in first before loading into Melodyne. 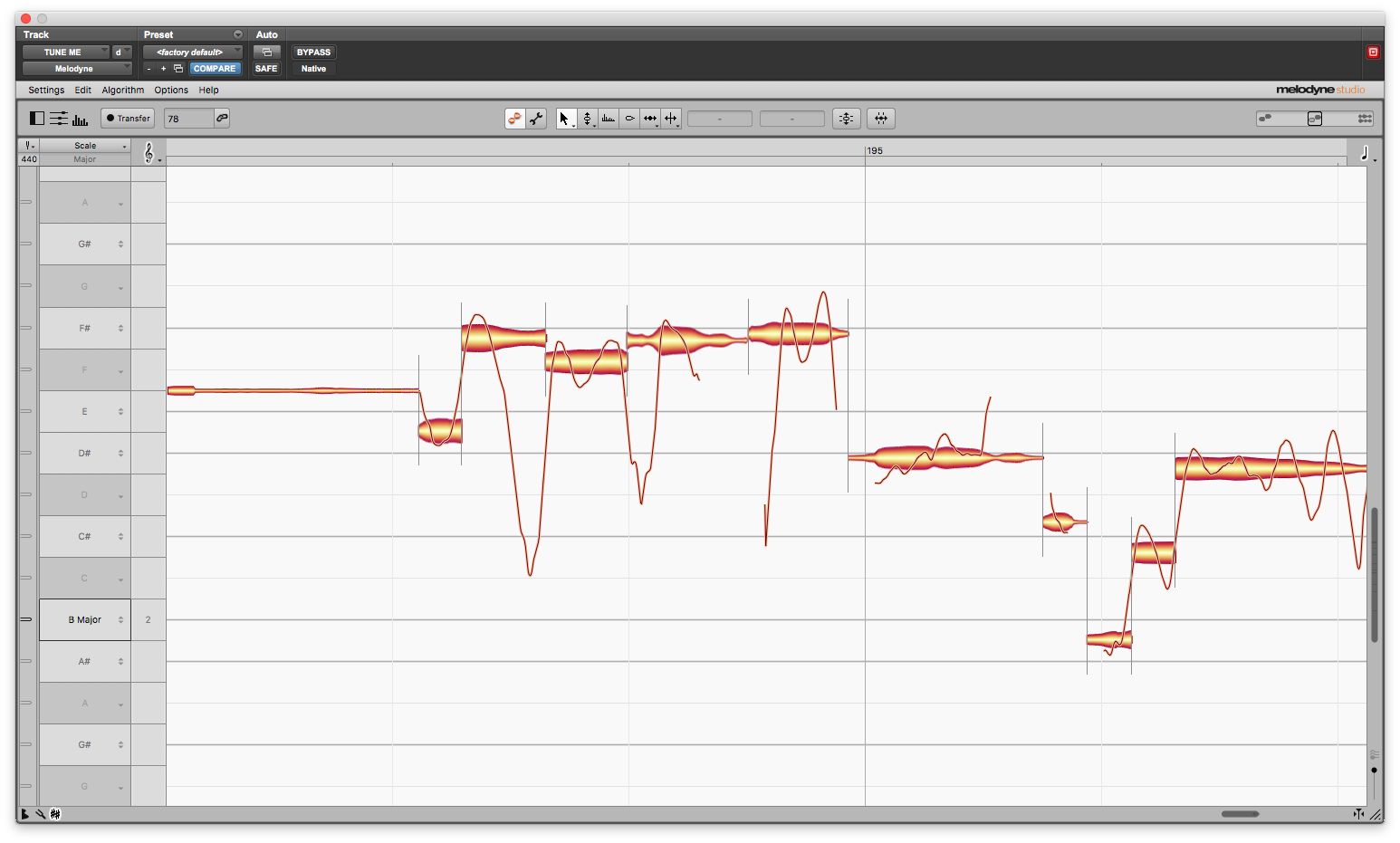 At first glance it doesn’t look like much, so let me make this a little easier to see by overlaying the Real-Time Tune version on the original. In this screenshot, the grey blobs are the original pitch. 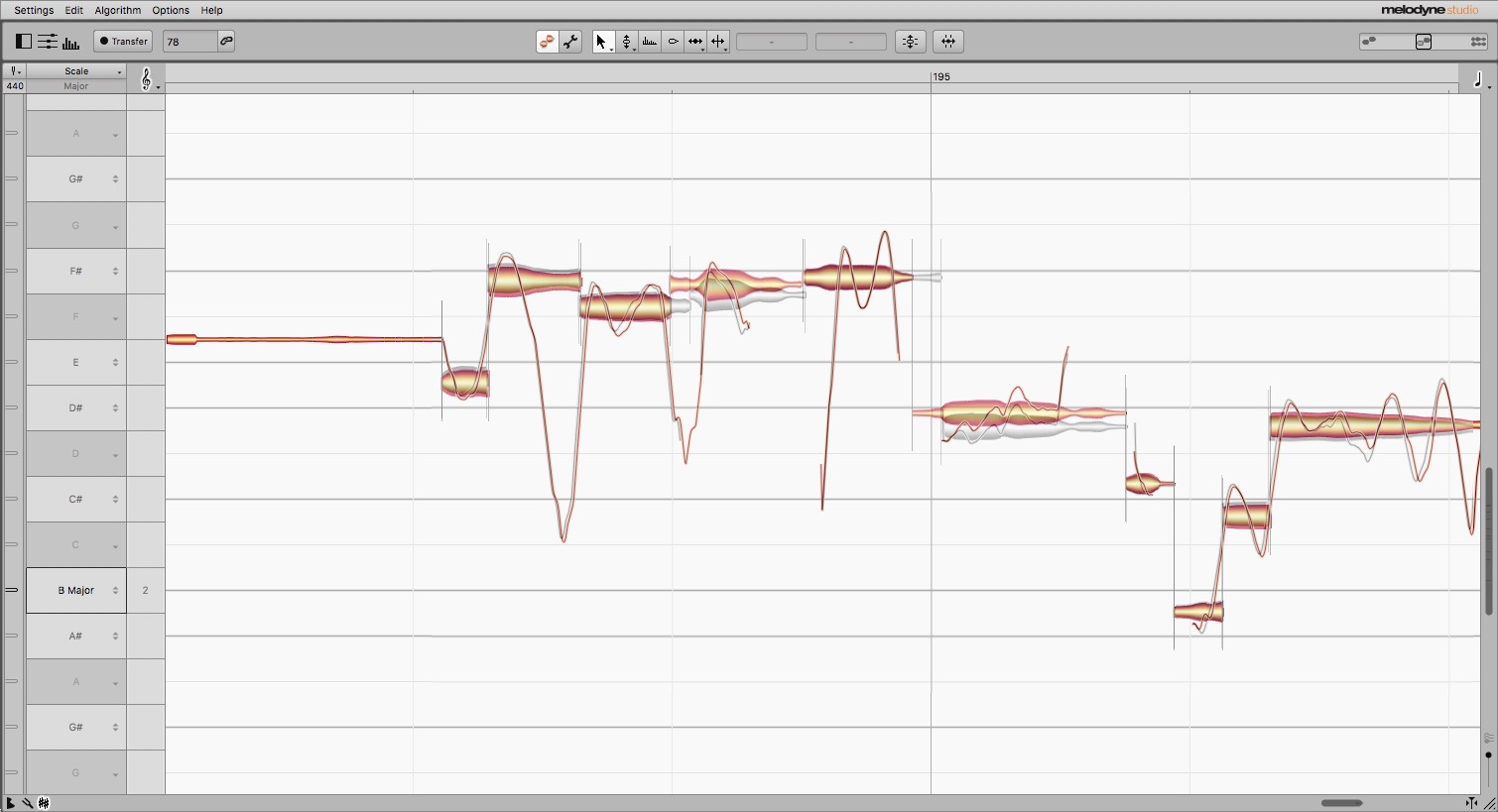 What I can see here is that Waves Real-Time Tune has tightened up the pitch of the performance a bit. Sometimes the changes are pretty small, but sometimes they’re a little bigger. What I think is important to note here, though, is we’re not reinventing the wheel with this. We’re just making things a little better, and that’s what makes some of the autotuning tools we have work nicely.

Perfect pitch is overrated. A degree of imperfection in a performance is how we know someone is a human. You’re probably familiar with what happens when we try and make a vocalist’s pitch absolutely perfect: they sound like a robot, and that sound gets used as an effect at times.

One of the things about Melodyne that I like and why I think it is so popular for pitch correction in the studio is you can retain imperfections within the performance of a note while moving the overall note performance closer to being right on pitch. Without giving a detailed lesson on Melodyne, it essentially gives you the ability to move each blob in pitch. A skilled tuner will cut those blobs up into more blobs so they match the pitch more accurately, and then tell Melodyne to automatically move them or move them manually to some degree. Whichever it’s done, the engineer may still retain a lot of the original performance if desired, and he doesn’t need to make them dead-on perfect. Melodyne can smooth the pitch out as well, but the important thing is it gives the engineer control over it all which is why vocal tuning can be an art form unto itself.

Automatic pitch correction doesn’t work this way, though. It’s calculating the pitch of what’s coming in in real-time, and then it’s moving the pitch in real-time to get closer to closest “correct” note. It doesn’t know when it should just shift things up a couple cents and hold or when it should try and correct everything or if it’s even moving things in the right direction.

So we don’t want auto correction to shift things too much or too fast or else it would remove too much of the emotion and original performance and add more artifacts in the process. This is why the controls on auto pitch correcting tools are primarily about time. We need to find settings that are fast enough to provide us enough correction while remaining slow enough to keep the natural performance there. And since live performance is supposed to sound live and real, I personally think it’s usually better to err on the slower side of things.

This is where I think automatic pitch-correction gets misunderstood. It’s not a fix-it-all or magic bullet solution. I’ve heard it said that “Autotune will make a good singer sound better, but it will make a bad singer sound worse.” There’s a lot of truth to this because if a vocalist can’t get in the ballpark of the correct note, automatic pitch correction may not correct the note close enough in a natural way, and it might pull the pitch to an entirely wrong note altogether.

Automatic pitch correction is a powerful tool that can help your vocalists in a streaming mix get closer to modern standards for vocal pitch. However, it’s not going to solve every problem. You still need to have vocalists on stage that can sing in the ballpark of where they need to be. At the end of the day, having a great source still trumps our technology.