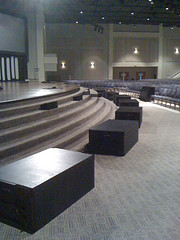 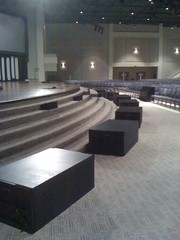 So this is going to sound sort of sacrilegious for some folks and I’m probably going to contradict myself from some earlier post(s), but I think I’m kind of over subs. I know, I know. Very easy for me to say as I have…well, let’s just say I get to play with a lot of subs….and I’m just kind of over the whole sub thing.

Subs have this sort of rock-n-roll live audio culture thing going. They’re like the black leather motorcycle jacket of audio gear. Everyone loves subs. I’ve spent inordinate amounts of time talking about subs subs subs with people. I like these. You like those. We don’t like these. I want more of those. Please put them on the floor. Those might actually work when you fly them. Subs subs subs.

The early years of my career were spent in the studio, and subs never seemed to matter as much in the studio. But when you start to play in live world and start getting the SPL up, subs are fun. Subs are cool. Subs are sexy. We can FEEL the music. When the subs are good, life is good. However, I fear we have elevated the importance of subs to a level above all other speakers. I am probably just as guilty of this as anyone else.

The reality is that over the last six or seven years of live sound work, subs have probably caused me more trouble and frustration than anything else. I mean let’s face it, you’re not a real live sound engineer if you’ve never gotten a complaint about the low end(too much or too little), and I think it’s safe to say I’ve irritated more people with subs over the years than anything else and only a few of those irritations were instances I would brag about….

The challenge with subs is it’s quite difficult to get the coverage right thanks to the long wavelengths of those sub-low frequencies and our friend destructive interference. It is also very hard to get that portion of the frequency spectrum right from an acoustics standpoint. Getting the sub-lows right is often an expensive proposition from both a time and money standpoint. It seems it’s ALWAYS a compromise just to get a bunch of speakers working that a good portion of the listening audience will never appreciate in the same way as the guy behind the desk.

Now in spite of all this, I do still consider subs to be essential for sound reinforcement for contemporary music especially if you’re approaching concert levels. You would have to fight me to take away any of our subs in our rooms, and I still believe it is worth it to take the time to get the subs right. I just don’t believe they are more important than the rest of the system.

So why am I over subs? I guess my real issue is what I would call the misappropriation of subs. A few posts back I mentioned that one of the things Robert Scovill and I talked about back in August was warmth in the mix. I think we were playing with my PA at the time when he stressed this to me:

And that’s the kicker because I know I’ve been guilty of trying to get my mix warmth from the subs. So what is the point of having subs if they’re hard to get right and often aggravate a good portion of the audience?

Well, subs typically cover the bottom two octaves of human hearing which range from 20-80 Hz, although, I’m generally most interested in that second octave from 40-80 Hz. There can be stuff in the mix below 40 and some subs will put out sound down there, but there’s not a lot of musical content in that 1st octave from 20-40 Hz; sound is primarily felt instead of heard when we get that low. It can be good stuff for videos and FX, but there’s generally not so much content there for music.

The second octave, on the other hand, is where we hear the bottom of musical pitches. We need subs because there is music down there, and when the 2nd octave is there and right it can really add a sonic foundation, if you will, to the mix. It can lend strength and weight to the mix. Without subs, the mix is incomplete.

Subs aren’t a bad thing. For me, properly deployed and optimized subs are like the finishing touch on a great system. Without them something is definitely missing. However, as I said above, I think a lot of us have placed the sub-woofer up on a pedestal and are misappropriating the use of them. Next up I’m going to dig into that a little more.