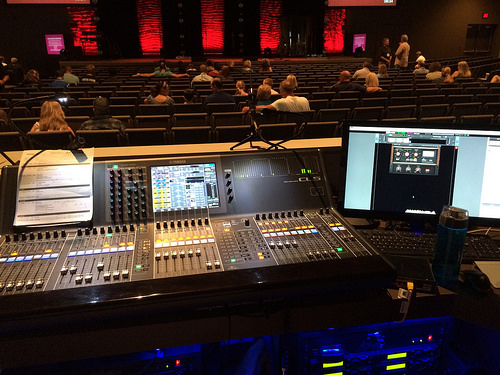 In addition to the consulting and training I’m doing with other churches, I’m also working as an independent engineer these days. One of the perks I’m finding from that aspect is being able to get my hands on different gear than I’ve been used to.

You may not have noticed in an industry where there is no shortage of opinions, but we’re in what I consider to be a bit of a golden age for live sound gear. There is a lot of good stuff out there these days compared to what we had 10 years ago. PA’s and consoles have both come a long way, and I consider it pretty nice these days when even the stuff I’d rather not use is still light years ahead of the gear I had when I started on this audio journey 25 years ago.

Last weekend I had the privilege to mix at one of 12 Stone Church’s campuses in the Atlanta area. The FOH console was a Yamaha CL5, and the PA was comprised of Danley loudspeakers.

Plus the beauty of all that new stuff was it forced me to really just focus on the music and the mix. I didn’t have a lot of time to think about the gear. While I did get some time on the console earlier in the week, there was no mid-week rehearsal, and we hit the ground running in the morning. My primary goal was to just get a mix up and get things feeling good.

Now, all that said, I do have some thoughts on the CL5 because I probably spent the largest portion of my time working with it. In general I think it’s a decent console, and I can understand why some guys like it. I didn’t get very deep into its features, but I did get up to speed on the basics fairly quickly which for me are gain, EQ/filters, dynamics, FX sends/returns, and my friend: the fader. By the end of the day I felt like I had a pretty good handle on things, and I was starting to look closer at some of the deeper functionality like custom fader banks and scenes. Like any desk it has some quirks, but I never found myself hating it which is a good thing for any piece of gear. It’s not going to be my first choice console, but I wouldn’t mind working on it again.

There was definitely some stuff I really liked about the desk, too. The CL5’s custom fader banks are great, and I think–or at least hope–this is the future of consoles. One of the things I liked about the CL5 is you can always get at your inputs and outputs in their “default” order/configuration, but at the same time you can build custom fader banks of inputs and outputs. The beauty of this is you can have an industry standard type setup and still leave room for an engineer to build their own quirky setup.

Using an industry standard input setup/order(drums, bass, keys, guitars, vocals, etc.) is never a bad thing to have and makes things a lot easier when you bring in an outside engineer. 12 Stone’s console was set up this way which made it fairly easy for me to locate everything from the start. Then when I was familiar enough with the console I was able to throw together my own custom fader bank to make things a little easier for me to navigate mixing the service.

Now I realize you could easily set up the same kind of functionality on a lot of consoles these days, but there’s something nice about having it built in. For me, the biggest challenge in encountering an unfamiliar digital console is each console has its own way of getting configured, and not every gig allows time to gain a deep understanding of this. So having access to a basic, familiar channel layout is a nice safety net to know is there.

Plus, when I’m mixing in a new environment, exactly what channels I’m going to need in front of me aren’t always apparent so that basic setup can be vcritical. For a standard music mix, I know what I’m going to want, but when it comes to other elements like playback and spoken word mics things can fluctuate depending on the flow of the event. Using snapshots or scenes can help with navigating the flow of an event, but when I’m on a new console I typically skip that frill. For my day at 12 Stone, I didn’t use any scenes so it was very important for me to have things easily accessible as needed, and the custom fader banks allowed me to do this once I had a grasp on how the day was going to flow.

Another CL5 plus was having more than 8 VCA’s, and I also liked how easy it was to figure out how to assign things to each VCA by just tapping the button on the touchscreen. And on the subject of inputs, being able to move the insert point was a nice touch. 12 Stone’s console had a SoundGrid server attached, and I liked being able to easily insert things where I wanted them in an input’s path.

Having that SoundGrid server available was also a great thing. It’s no secret I’m a big Waves user, and this let me use processing I’m very familiar with on the mix. I was also finally able to employ the DBX-160 on a live mix, and that was a huge win for me because I’ve been wanting to use it for months in this context.

So all in all, I thought the CL5 was a decent little console, however there were a couple of things I wasn’t a big fan of.

In general, I never felt like I had very fine control of the actual mix on the CL5, and this started with the EQ. I didn’t like the detents on the encoders, and every time I changed something I felt like it jumped even when using the console’s finer adjustment mode by pushing in the encoder and turning it. The EQ also exhibited zipper noise at times which was pretty uncool to hear on a modern digital EQ, and the EQ also popped when I toggled the high band to a shelf.

The faders were another area where I didn’t feel like I had very fine control of things. The faders themselves were pretty smooth to push around in a physical sense, and felt better than the Digico SD10’s to me. However, I never felt like I had the fine control I’m used to with Avid and Digico, and the level display for the faders seemed to confirm this even near the unity sweet spot of the fader throw. And the loss of resolution near the sweet spot meant I lost even more resolution outside of the sweet spot. In 2015, I see no reason why I shouldn’t be able to get at least .1 dB of detail from -5 dB to +5 dB on a fader’s throw, and I didn’t have that on first my time working with the CL5.

I don’t know about anyone else, but my live mixes live and die by faders and EQ. They are the two most important things on the desk for me. I love that the CL5 has dedicated controls for each EQ band, but I’d love to see a software upgrade that improves the resolution of the EQ and faders. Who knows; maybe they already have updated things, and the particular console I was on just hasn’t received it, yet.

Now, in spite of these couple of things, I still wouldn’t mind mixing on a CL series console again. It’s a decent desk, however, it wouldn’t be my first choice. I’d just know going in that I’m going to have a harder time doing my best work on it, but I know I could put together a good mix on it. 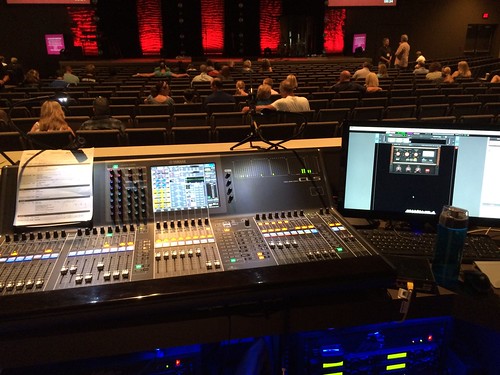 Need a FOH Engineer? Need assistance with your PA or other audio gear? Are you trying to figure out how to take your team’s audio game to the next level?

I’d love to connect to help find a solution for you. Click here to drop me a line, and I’ll be happy to get in touch with you.

4 Responses to “Out and About”