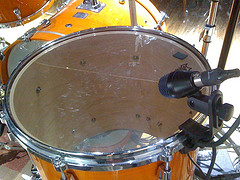 New Drum Stuff, But Probably More of the Same…. 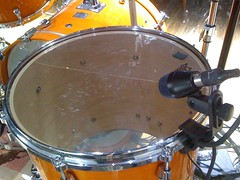 It seems like it was only a few weeks ago, but it was probably much longer when we received some new tom mics. I got a lot of questions on Twitter about why I was replacing our 421’s, and the truth is we haven’t replaced the 421’s. We have two auditoriums and when we added 421’s to the east auditorium, we didn’t put them in the west. 421’s are my favorite sounding tom mics and while I would have been happy to add a few more to our mic inventory to put on the west drums, the reality is that 421’s aren’t exactly the most convenient mics to position in our setting. They quite often pop off their clips while positioning them, and their size can also make it difficult to get them properly positioned especially on our drum risers with a limited amount of space between the kit and the shield.

So for the last three years we’ve had Shure KSM44’s on the toms in the west, but I just haven’t been digging them for a while. They’ve worked great, but I think we were all ready for a change. I opted for the Sennheiser e904’s because I’ve been digging the results Dustin has been getting with them down at Buckhead. Plus they’re small and easy to position compared to 421’s or KSM44’s, and the e904’s don’t require messing with an LP Claw or a mic stand to get in position. They just clip to the rim. I feel a bit lazy using them, but I’ve been real happy with the results so maybe the lesson is you don’t always have to do everything the hard way to make it work.

In fact, speaking of tom mics. The audio guys up at Browns Bridge did a mic shootout on a whole lot of tom mics a few months ago. The results they had were not very surprising to me. Ultimately, it all comes down to the drum. Everything they tried worked because the drum they tried it on was tuned up and sounding good. 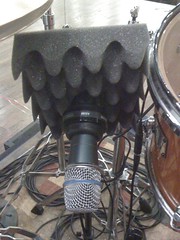 Another thing I’ve been playing with is this little piece of foam on the back of the snare mic. I really like a Beta57 on the snare. For me, I feel like I can get a little more crack out of it than a regular 57. The pattern is also tighter so you can turn the hi-hat bleed down a bit with the right mic placement. The hard thing with the mic, though, is since it’s a supercardioid mic there is a lobe in the pickup pattern directly behind the mic. As a result sometimes we get some nasty crash cymbal bleed into the mic depending on where the mic is pointed. Sometimes the back of the mic might be aimed right at a crash cymbal, but more often I think it’s due to reflections off the shield.

Something we ordered came with two pieces of foam in the size pictured so I cut a hole in middle and slipped it on the back of the mics in each auditorium. I think the verdict is still be out because I need to work through all of our drummers to get a real sense because they all have a different level of bash. So far, though, I think it’s working.

The last thing I recently did with drums was move my ride mic from underneath the ride. Touring the U2 stage last month got me thinking of trying this again, and I think I’m definitely going to stick with it. It definitely seems to make it easier to get more of the ping out of the ride this way. I have the mic aimed towards the bell and then a little higher to target a little closer to the middle of the radius of the cymbal. Basically I’m trying to aim for where the stick is going to hit to get the maximum attack off of that. There’s always plenty of cymbal ring in the overheads, but it’s that attack that I struggle with at times. Having the extra mic on the ride gives me the option of turning down all the cymbal wash for louder drummers while still being able to get some of that ping off the ride.

What fun and exciting things are you playing with on your drums these days?

4 Responses to “New Drum Stuff, But Probably More of the Same….”

TweetShare
If you enjoyed reading this post, please share it!
New Drum Stuff, But Probably More of the Same….