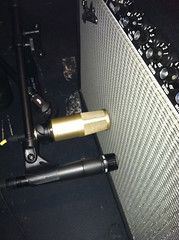 I was going through an old interview with Bob Clearmountain when I stumbled on this little gem:

Mel Lambert: What mikes[sic] do you normally use on the drums?

Bob Clearmountain: [laughter] Do you really want to know that? I’m not sure it really makes all that much difference.

I loved seeing this because something I’ve noticed recently is there seems to be a bit of a mic obsession with a lot of church engineers. There’s just a lot of drooling and foaming at the mouth over the it mics of today.

I do think mic choice matters, and I definitely have my own tastes and preferences. These were developed in seasons where I was trying different things, and that’s probably a healthy thing because every engineer has to kind of figure out what works for them. But it’s also very easy for this pursuit, experimentation, and exploration to move into unhealthy territory.

What I’m seeing lately is the microphone thing getting more weight and emphasis than it probably deserves. I feel like some guys are chasing some Holy Grail microphone like it’s going to solve all their problems, and they are approaching the mic fad of the day with the attitude that everything that ever existed before and has been used for decades is junk. You do understand how ludicrous this line of thinking is, though, right?

Now, does changing microphones make a difference? Sure it does because every microphone has its own unique characteristics.

But it doesn’t make as much of a difference as mastering fundamental engineering skills like mic placement and basic mix balancing or having great songs and skilled musicians to perform them in the first place. I rarely talk about specific mics when I’m doing a mixing workshop for a church because most churches these days have good microphones to begin with, and their mic selections aren’t holding them back.

If you have professional equipment and haven’t learned how to squeeze everything you can out of it, then your gear isn’t the issue.

Changing one pro mic for another is in a lot of ways the audio equivalent of Coke vs. Pepsi. Given a choice, you’ll probably prefer one over the other, but if you only have one choice I don’t think it’s as big of a deal as a lot of guys seem to think or make it out to be.