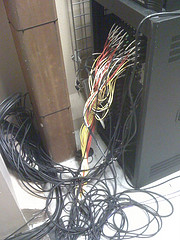 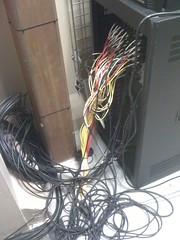 So as I said in my 2008 reflections, 2009 is probably going to be about cleaning up a lot of things. What you see in the photo here is a prime example. For over 2 years, this has been our temporary location for the Venue’s stage racks. I say temporary because for the last two years we’ve been planning on doing a bunch of upgrades, and we were waiting on moving the gear because we were counting on space freeing up. For two years we’ve felt like we’ve always been about 2 months out on moving forward with everything. But after two years, it’s not a future plan anymore, it’s simply a pipe dream, and I couldn’t take it anymore. It’s just been a never ending bird’s nest of cables. It looks really bad, and it’s even worse if you ever need to try and find a cable run within that mess. It has gone through fleeting moments of organization over the last couple years, but it was always a mess to some degree. Not only was it driving me crazy, but I got sick justifying and apologizing for it. So last week I started trying to figure out a solution to find the gear a new permanent home.

Now, in general I’m not really thrilled with our amp room organization. The Venue Stage Racks exemplify what the room has become over time. We have often just had a “Let’s cram it in” mentality which was fine for me for a while; anyone who works or lives with me will be the first to tell you that I’m not very conservative when it comes to my definition of clean. But I just can’t take it anymore, and if I have it my way, that room is going to look a bit different a year from now.

So my plan last week was to start moving in the direction of taking our amp room forward–hopefully another theme for ’09. Our amp room is basically divided into two rooms with a doorway in between. One room holds the gear for the east auditorium, and the other holds the gear for the west. In our east amp room, we have several shelves that drive me nuts. Andy Stanley says that your current system is perfectly designed to give you the results you currently get, and those shelves are a system that needs an overhaul. So I pulled out a tape measure and started measuring to see how I could get the rack with the Venue stuff in it somehow under those shelves because I’m hoping to overhaul them this year anyway.

As I was measuring, I had an epiphany. I looked up and found myself staring at the back of our wireless mic rack, and noticed a lot of empty space. I don’t know how I missed this before. The rack houses our wireless mic split along with a few legacy amps we use for an occasional wedge. I did some quick measuring, and things were looking good on fitting the Venue Stage Racks in.

I ran the idea past our trusty associate audio director, Luke, because I thought we might need to pull a couple of the amps in the process. Luke keeps monitor world running so I knew if we pulled those it could hit him hardest down the road. But the reality is that we haven’t used more than 2 channels of wedges in the last two years so Luke gave the thumbs up on the idea. 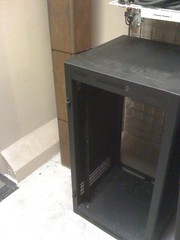 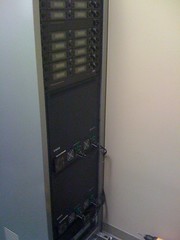 On Wednesday morning, I pulled out some legacy wireless gear we won’t need with the incoming stuff and set about rearranging some stuff in the wireless rack with the help of our intern, JJ. By the end of the day we had all the gear shifted around and the cables re-run up through the ceiling. We did end up losing 2 of the 3 monitor amps, but the room looks and feels so much cleaner now. It gave us a bunch of space back where the Venue racks were squatting, and it was also encouraging for trying to really tighten the room(s) up this year.

The shelves are gonna be next, but they’re probably going to have to wait a few months because we’ll probably need to think that one through quite a bit, and I’m trying not to spend much money on any of this.

If you’ve got any cool gear storage/organization setups, I would LOVE to hear about it!

4 Responses to “It Was Embarrassing”